Krasnodar Airport received the first flight of Eurowings from Dusseldorf 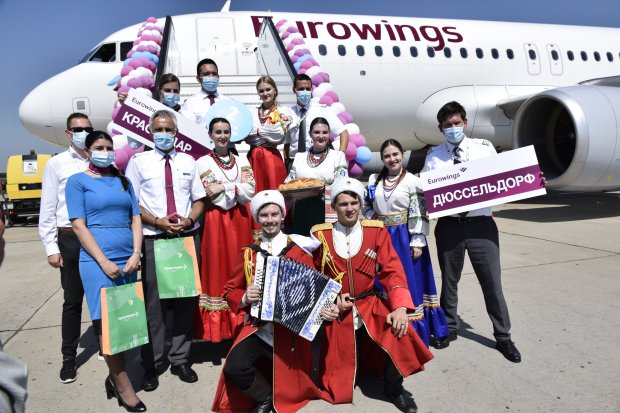 The first board of the low-cost air carrier Eurowings (a subsidiary of Lufthansa) was received in Krasnodar airport in a festive atmosphere. The aircraft passed through a traditional water arch. The red carpet and the Cossack song choir, who greeted the guests with traditional bread and salt treats and welcoming songs, awaited the first passengers. Totally 123 people arrived from Germany.

The first board of the low-cost air carrier Eurowings (a subsidiary of Lufthansa) was received in Krasnodar airport in a festive atmosphere. The aircraft passed through a traditional water arch. The red carpet and the Cossack song choir, who greeted the guests with traditional bread and salt treats and welcoming songs, awaited the first passengers. Totally 123 people arrived from Germany.

Representatives of the Lufthansa group, the Honorary Consul of Germany in Krasnodar Dr. Ralph Bendish, as well as guests, attended the opening ceremony of the new direction from the city administration headed by Mayor Evgeny Pervyshov and employees of Krasnodar airport.

The opening of air travel with Germany is an important event both for the airport itself and for the residents of the Krasnodar Territory. It proves that life is starting to get back to its usual pre-COVID course, which was emphasized by Yevgeny Pervyshov, the head of the municipal formation of the city of Krasnodar in his speech:

— We are trying to expand our partnerships, including with business centers in different countries. Direct flights between Krasnodar and Dusseldorf are not only great opportunity for residents of Krasnodar and the entire Krasnodar Territory to travel, but also a prospect for business representatives to establish new business relations. In general, opening of such flights gives hope that the existing restrictions will become a thing of the past. We will defeat the coronavirus infection and live our normal life as usual.

Honorary Consul of Germany in Krasnodar Dr. Ralph Bendisch spoke about the importance of the new flight on an international political scale:

— As for a businessman and Honorary Consul of Germany, it is important for me that relations between our countries develop. You all know that such a bright political sun is not shining everywhere now. Therefore, such events are especially important.

— It is always a pleasure for Krasnodar airport to open a new flight. Moreover, flights to Europe and Germany, in particular, have not been carried out for more than a year. We hope that this route will make it easier for passengers traveling between Russia and Germany. Moreover, this is the direct flight, it will bypass Moscow.

Aviation Commerce Director of Aerodynamics Group, Alexander Nikonov, recalled that the launch of the new flight was performed during the difficult period of the COVID-19 pandemic for the whole world.

- We meet today's flight from Dusseldorf despite the pandemic. We are glad that international traffic is starting to recover, and we are making every effort to bring even more guests from abroad to our region. We express our gratitude to Eurowings for the decision to open a route to Krasnodar at these difficult times.

The representatives of the airline highly appreciated the reception and expressed confidence that in the future the relationship between the airline and the airport will be strengthened.

Lufthansa Group commercial representative Maria Kudashkina noted that the new flight would be convenient in terms of geographic location as well as departure time.

— Eurowings is opening flights to Russia for the first time, and we are very pleased that this direction will make Europe even closer for the residents of Krasnodar Territory. Dusseldorf has a good geographical advantage, namely its proximity to neighboring European capitals. In addition, our offer and convenient departures twice a week are suitable for both tourists and business travelers.

Flights will be operated by Airbus A320 aircraft twice a week. On Fridays, it will arrive in Krasnodar at 13:20 and departure to Dusseldorf at 14:40. On Mondays, the plane will land in Krasnodar airport at 16:55 and take off at 18:15. Average travel time will be 3 hours 10 minutes. The ticket price will start from 119 euros.