Istanbul Airport: Leader of the Aviation Industry with "5-Star" Rating 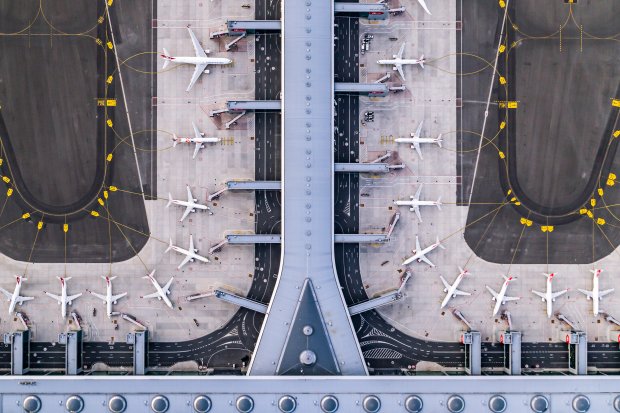 Rising firmly in the global aviation scene with its unique architecture, strong infrastructure, superior technology and high-level travel experience it offers, Istanbul Airport was deemed worthy of the "5-Star Airport" award according to the evaluation of Skytrax, one of the most important organizations in the international arena. Thanks to the measures taken against COVID-19, Istanbul Airport became one of the two airports in the world that was certified with the "5-Star COVID-19 Airport" rating, in addition to the "5-Star Airport" rating.

As Turkey's gateway to the world, Istanbul Airport continues to be the pride of Turkish aviation, with awards received worldwide. Selected recently as the "Best Airport" in the Digital Transformation category as a part of "16th ACI Europe Awards" organized by the Airports Council International (ACI), owing to its digital infrastructure and state-of-the-art technology, Istanbul Airport receives yet another award.

Istanbul Airport, which received the "Airport Pandemic Certificate" issued by the Directorate General of Civil Aviation, and then signed the "COVID-19 Aviation Health Safety Protocol" published by the European Union Aviation Safety Agency (EASA), before the Skytrax awards, also became the first airport in the world to obtain the "Airport Health Accreditation" certificate presented by Airports Council International (ACI).

Istanbul Airport comes out of the tough assessment with "5 Stars"!

Skytrax, which is an international air transport research agency, has been providing quality audits, star grading and quality comparison services for airports and airlines since 1989. After comprehensive arrangements and detailed preparation period followed by 3 days of intensive physical audits, passenger experience excellence offered by Istanbul Airport has been acknowledged with “5 Stars” by an international organization. Possessing the biggest terminal among "5 Star" rated airports, Istanbul Airport has showed that it achieved a great and a rare success.

Auditing the Istanbul Airport which is one of the best aviation hubs with its architecture and technology, auditors have experienced each point of contact that affects departing passenger, transfer passenger and arriving passenger experience such as parking areas, public transport, website, mobile application, security/passport control, basic passenger services, shops, food and beverage areas, baggage claim; and they have analyzed the service offered at that points, service accessibility and passenger comfort meticulously. In addition to almost 800 criteria, which were assessed in a detailed manner, the measures against the pandemic were also subjected to the grading.

During the audit, where each aspect that has an impact on traveling experience was evaluated, main processes such as security check, check-in, passport control, customs, cleaning, baggage claim and also main services, catering areas, shopping areas and lounges were inspected in detail by the experts. In addition, the measures taken against the pandemic were also considered in the quality inspection. Istanbul Airport, which won 2 important awards as a result of the lengthy audits of the Skytrax experts, has shown the importance it attaches to perfection in the passenger experience.

“At Istanbul Airport, we turned dreams into reality, and reality into leadership!”

Kadri Samsunlu, the CEO and General Manager of İGA Airport Operation, who made remarks about Istanbul Airport having been deemed worthy of the two major awards by the world-renowned aviation assessment company Skytrax stated that "An airport being certified as both a "5-Star Airport" and a "5-Star COVID-19 Airport" by an important aviation authority like Skytrax, just after 2 years since its opening and 1 and a half year after commencing its operation at full capacity, is a rare situation. I can say with pride that, as İGA, we have achieved this as Istanbul Airport. We have established a customer-oriented culture in our airport, we will advance this even further and our work in this respect is continuing at pace. We are the 8th hub airport in the world to receive "5 Stars" among the global transfer hub airports, after Doha, Hong Kong, Munich, Seoul Incheon, Shanghai, Singapore and Tokyo. We have also become the fourth airport in the world to receive the "5-Star Covid-19 Airport Rating", in respect of the COVID-19 measures implemented at airports. We are the second airport in the world to hold both titles at the same time. As well as all of its other features, Istanbul Airport is the airport with the largest terminal among all of those with "5 Stars". As is known, immediately prior to these important awards presented by Skytrax, we were also selected the "Best Airport" in the Digital Transformation category, within the scope of the "16th ACI Europe Awards", organized by Airports Council International (ACI). All of these valuable and prestigious awards are proof of how much confidence the aviation authorities in the world and especially our passengers have in İGA and Istanbul Airport. I would like to emphasize this in particular; those who walk firmly and with bold steps for the sake of the values they believe in, sooner or later reach the goals they dream of. At Istanbul Airport, we as İGA, we turned dreams into reality first, and now reality into leadership! We are proud and happy on behalf of our country for having achieved such a success. I would like to thank everyone and all our staff, who has contributed for this achievement. With the same excitement and enthusiasm like the first day, we will continue our efforts to make our country, and Istanbul Airport the world's most important aviation hub." he said.

The CEO of Skytrax Edward Plaisted stated; "We are pleased that Istanbul Airport has joined amongst the prestigious 5-Star Airports. This participation is a well-deserved recognition that the high standards provided at İGA Airports are also presented here. Istanbul Airport is an outstanding engineering achievement with its terminal with a capacity of 90 million passengers, completed in 3 and a half years.  This grand airport has an impressive diversity of passenger facilities, with the ease of accessibility to different terminal areas. Today, Istanbul Airport was entitled to receive the 5-Star COVID-19 Airport Safety Rating. This rating recognizes comprehensive measures that the airport takes to reduce the spread of coronavirus, such as comprehensive signs and passenger guidance, increased hand sanitizer dispensers, disposal of personal protective equipment and social distancing adjustments, as well as a separate Biosafety Team to ensure the implementation of all these protocols.