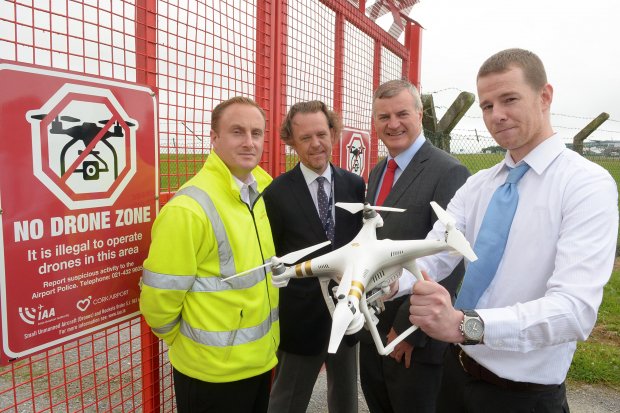 Tuesday, 26th July 2016: Cork Airport has launched an awareness campaign aimed at drone users. The number of incidents involving drones and aircraft on approach or departure from aerodromes across Europe has increased in recent years. In response to these, the Irish Aviation Authority (IAA) introduced regulations in 2015.

Cork Airport is now taking a leading role with a proactive approach to promoting drone usage awareness with this new campaign.

In conjunction with the IAA, the body responsible Safety Regulation and Air Traffic Control, Cork Airport is placing signage around the airport perimeter at various approach locations to runways. The “No Drone Zone” signage was designed by the airport and the IAA.

Ciaran Carton, General Manager Operations, at Cork Airport said: “While we haven’t had any issues with drones to date, we’ve decided to take a proactive approach and educate drone users and the wider community on responsible drone usage. Cork Airport is the first Irish airport to launch a campaign like this one and a similar approach is likely to be adopted in other airports”.

Cathal MacCriostail, IAA Manager Airspace and Navigation commended Cork Airport for the initiative: “It is great to see Cork Airport take a proactive approach, given the increased usage of drones in Ireland. It is the responsibility of users to ensure the safety of the public when flying drones. It is also their responsibility to familiarise themselves with the regulations. There are a number of limitations on where users can fly their drones. This includes the airspace within 5 kilometres of an aerodrome, where the flying of drones could be hazardous to aircraft.

“The main advice we would give anyone thinking of buying or flying a drone is to go to our website, www.iaa.ie and inform themselves of their responsibilities”.

Drone user, Raymond Fogarty believes that there is a huge onus on other users to educate themselves: “I operate drones on a commercial basis with my company AirCam Ireland and I am approved by the IAA and also fully insured. From my experience, the majority of commercial users are up to speed. There has been a spike in the recreational use of drones and that’s fantastic but it does lead to problems. Drones are considered unmanned aircraft and there are strict regulations around their use. A simple example is making sure you have the permission of the landowner where you are taking off or landing the drone. Also, there have been dangerous situations where drones are being flown too close to people or built up areas”.

If anyone wishes to use a drone outside of the limitations set in the regulations, then they must seek permission from the IAA. Any drone over 1 kilogram must be registered with the IAA; this also applies to model aircraft over the same weight.

A good example of how drones can be used effectively and creatively is a recent collaboration by AirCam Ireland, Cork Airport and the IAA. Under strict safety conditions, Air Cam Ireland captured some fantastic drone footage of Cork Airport at sunrise as part of a promotional video https://youtu.be/arPSmgyL3Wk used to secure an aviation conference for next year.