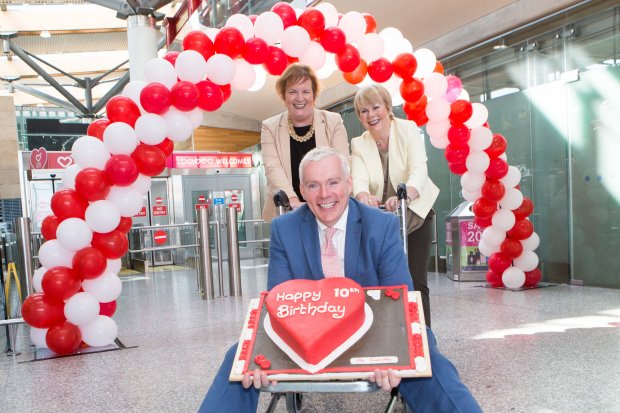 Monday, 15th August 2016: Cork Airport celebrated the 10th birthday of its terminal building today. Since it first opened in August 2006, over 25 million people have travelled through Cork Airport’s “state of the art” terminal and facilities.

Niall MacCarthy, Managing Director at Cork Airport said: “We wanted to mark the important occasion of the 10th anniversary of the new terminal building. It is a wonderful facility for the South of Ireland and still looks new even after the 10 years. This is a tribute to the foresight of the designers and the quality of the maintenance programme and staff since its opening 10 years ago.

“It is also heartening to mark the 10th anniversary in a year that has seen remarkable growth in new routes and capacity, new airlines and greater choice at Cork Airport firmly placing us as the largest airport in the Republic after Dublin. We plan to consolidate that growth with further announcements for 2017.

“We at Cork Airport are ideally situated at the start of the Wild Atlantic Way and Ireland’s Ancient East, both of which are proving hugely successful with both inbound and domestic tourists”.

However, MacCarthy believes the biggest win for Cork and the wider Munster region will be the addition of direct low cost transatlantic services once the logjam over the US licensing for Norwegian Air International Limited is finally resolved. He said: “We are hopeful that the recent intervention of the EU Transport Commissioner Violetta Bulc together with the support of the Irish Government will get this over the line”.

He added: “although we have a fine facility here, we continue to develop our offering which included the addition of a second airbridge in recent months, which is fully utilized, and a new fire training ground, which is about to commence construction.

“In 2017, we also plan a significant modernisation and upgrade of our food and beverage areas in the airport with much more facilities and fresh choice airside after passengers go through security. Some interesting concepts are being explored now which will be in place for Summer 2017 and which I am sure passengers will greatly welcome.

“Can I finally express my appreciation to all of the staff who work and worked at the airport (our own, our airlines, handlers, Immigration, Customs and service partners) who have facilitated the travel of those 25 million passengers over the last 10 years in the terminal. We are grateful for the support of the people of Munster and look forward to servicing even more than 25 million passengers in the next 10 years,” he said.