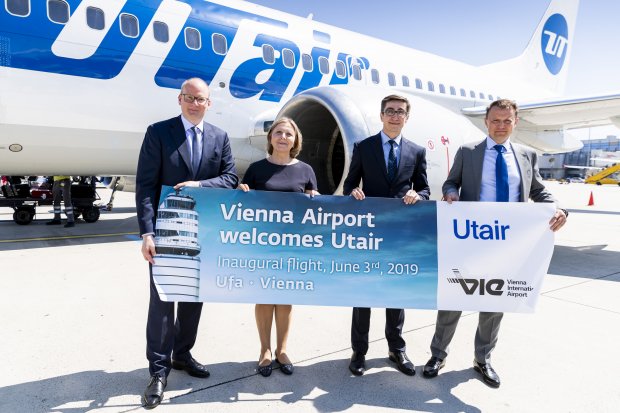 Starting today, Monday, June 3, 2019, Utair operates flights from Vienna to Ufa. Two weekly flights will be offered during summer season to the capital city of the Russian Republic of Bashkortostan. The Russian airline now offers flight service from Vienna to a second destination in Russia alongside Moscow. Russia represents an important market for Vienna Airport and the entire business and tourism location of Austria. The new flight connection was officially inaugurated today by Julian Jäger, Joint CEO and COO of Vienna Airport and Timur Mukhametyanov, Minister of Transport of Bashkortostan, as well as Tatiana Domentean, airline representation of Utair in Austria and Arthur Schainurov, CEO of Transterminal-Aero GmbH Ufa.

“For the very first time there is now a direct flight connection between Vienna and Ufa in Bashkortostan. Utair links two important industrial locations and strengthens the economic ties of both countries. The opening of flight service on this route represents the 46th Eastern European destination served from Vienna Airport, making it one of the leading flight hubs in the region. Flights are operated to six different airports in Russia alone in the summer of 2019”, says Julian Jäger, Joint CEO and COO of Vienna Airport, who is pleased with the new flight connection.

"Ufa International Airport is Utair's most important regional hub. Just this year, Utair and the Government of Bashkortostan agreed to expand cooperation and open a high-tech aircraft maintenance centre at the airport. In the spring-summer season, the airline will connect Ufa with Anapa, Yekaterinburg, Kazan, Moscow, Nizhny Novgorod, Samara, Surgut, Tyumen and Khanty-Mansiysk. In Ufa, Utair is launching its first international flight route from the region to Vienna. We are sure that the route will gain popularity among the residents of the region," President of Utair Passenger airlines Pavel Permyakov commented.

Ufa is the capital city of the Republic of Bashkortostan in the south-eastern part of European Russia. The city with its population of more than one million inhabitants is the most important business centre in the region and a significant industrial location in Russia. Bashkortostan not only stands for oil and other resources but also for technologies such as helicopter drive systems. The rather unknown holiday destination boasts considerable potential for tourism. In particular, avid hikers will get their money’s worth, enjoying the far-reaching landscapes. The Ural Mountains with impressive mountain scenery and grasslands is 100 kilometres away. The original route of the Trans-Siberian Railway used to pass directly by Ufa. Today the next train station of the world’s longest railway line is about six hours away by car. On June 25, 2019, a cultural extravaganza will take place in Vienna’s Museum Quarter featuring more than 100 artists and musicians from Bashkortostan. This event is designed to increase awareness of Bashkortostan. Similar to Austria, parts of the country have been designated UNESCO World Heritage sites.

Twice weekly to Ufa
The Russian airline Utair serves the Vienna-Ufa route twice weekly during summer, namely on Mondays and Fridays. The aircraft takes off from Ufa at 9:45 a.m. and lands in Vienna at 11:05 a.m. The return flight departs from Vienna at 12:05 p.m. and arrives in Ufa again at 7:20 p.m. The airline has also offered flights from Vienna to Moscow-Vnukovo since the summer of 2017.