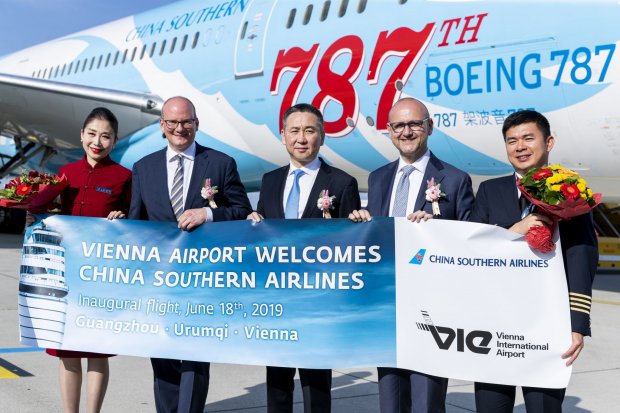 There is a new highlight in the long-haul flight offering from Vienna. Yesterday evening, June 18, 2019, China Southern Airlines, Asia’s largest airline, began operating three weekly flights from Vienna to Urumqi and Guangzhou in the People’s Republic of China. As a result, two important regions in Northwest China and South China can be reached from Vienna for the first time. This new flight connection was officially inaugurated yesterday in the presence of Julian Jäger, Joint CEO and COO of Vienna Airport, Norbert Kettner, Director of the Vienna Tourist Board and Han Wensheng, COO of China Southern Airlines, marking the initial flight on this new route.

“China is an important growth market for Vienna Airport and one of Austria’s most important trading partners. Since the beginning of the year, passenger traffic from Vienna to the Far East has risen by 29%. We would like to welcome China Southern Airlines, Asia’s top carrier and a strong partner, in order to more effectively open up the region. Now two significant business locations in China are accessible from Vienna, namely Urumqi in the northwest of China and Guangzhou in the south. Vienna is the first destination in Central Europe to be included in the route network of China Southern Airlines, and we are very pleased with our new partner at the airport hub”, says Julian Jäger, Joint CEO and COO of Vienna Airport in welcoming the new flight connections to China.

"In the meantime China is the world’s largest travel market. Vienna can fully exploit this potential thanks to excellent flight connections. Last year the city already registered more than half a million overnight stays from China. The Greater Vienna metropolitan area is the third most popular city destination of Chinese guests in Europe, surpassed only by London and Paris. Vienna accounts for a good third of all Chinese overnight stays in Austria. The new flight connection is an important milestone in the market development work carried out by the Vienna Tourist Board. I would like to warmly welcome China Southern Airlines to Vienna”, explains Norbert Kettner, Managing Director of the Vienna Tourist Board.

“The successful launch of the Guangzhou-Urumqi-Vienna air service marks a bold and exciting step forward that China Southern has taken to transform itself into an international network-oriented airline. This new route will significantly promote the cooperation between China and Austria in economy, trade, tourism, culture and other areas. It will also enhance connectivity along the route and facilitate the exchanges and cooperation between China and the surrounding countries of Austria, including Germany, Switzerland, France and Italy. All of our efforts serve to push forward the exchanges, development and prosperity of China and Europe, the two of the world’s largest economies and will make significant contributions to the Belt and Road Initiative”, said Mr. Han Wensheng, Chief Operating Officer of China Southern Airlines.

China Southern Airlines operates a flight from Vienna, serving two destinations in China at the same time. First, the aircraft takes off from Vienna to fly to Ürümqi, the capital of the autonomous region of Xinjiang Uygur in the northwest of China. The city is located directly on the historical and also planned “new” Silk Road connecting the economic and production sites of Asia with Europe. Afterwards the flight continues to the important industrial and trading city of Guangzhou, also called the “Factory of the World”. With more than ten million inhabitants, it is the most prominent metropolis along the Pearl River Delta, which is one of the largest contiguous urban areas in the world. The airline operates its flight hub in Guangzhou, from where passengers can conveniently reach numerous other destinations with China Southern Airlines. By the way, the official symbol of the City of Guangzhou is the “ceiba tree”. A stylised, fiery-red blossom of the Asian tree adorns the logo of China Southern Airlines.

Three weekly flights to Urumqui and Guangzhou in a Boeing 787 Dreamliner
Starting in June, the China Southern flight arrives in Vienna on Tuesdays, Thursdays and Saturdays. A Boeing 787 Dreamliner is deployed on the new route. This aircraft is characterised by spaciousness, low cabin pressure, improved air quality and optimal humidity. Accordingly, it offers passengers a particularly high level of travel comfort.

China Southern Airlines – Asia’s largest airline
China Southern, the largest airline in Asia and one of the biggest in the world (with respect to the size of its fleet) has an impressive fleet of 840 Boeing and Airbus aircraft. The Chinese airline operates more than 3,000 flights each day to 224 destinations in 40 countries and transported 140 million passengers in 2018. On June 15, 2018, China Southern Airlines was given the “2-Star Flight Safety Diamond Award” of the Civil Aviation Administration of China (CAAC) and was thus designated as China’s safest airline.