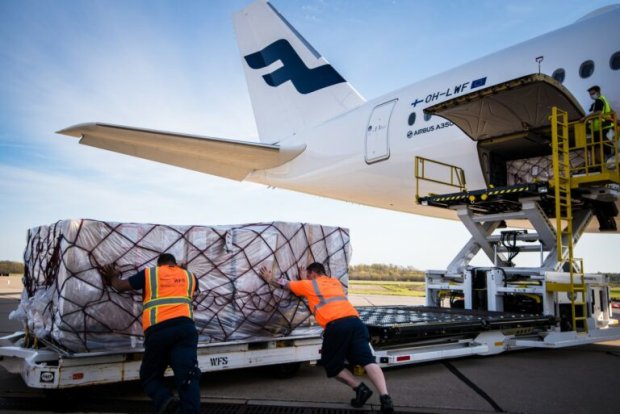 Finnair’s first flight touched down Tuesday, arriving nonstop from Helsinki-Vantaa Airport in Finland and transporting automotive parts from Asia to North America. The new service is another win for PIT as the airport continues to move forward on expanding its cargo footprint.

Currently, the service is planned to be short-term, with flights operating in April and May. However, airline officials said they are hopeful the service could expand beyond the initial schedule.

“We were delighted to have this opportunity to offer Pittsburgh as solution for our customer,” said Fredrik Wildtgrube, vice president of Finnair Cargo. “We believe that meeting the customer needs and having readiness to open new routes will increase interest towards our cargo products.”

Supply chain challenges during the pandemic have prompted airlines like Finnair to look beyond their traditional network. Airline officials compared PIT to their Helsinki hub, saying smaller airports can be faster, agile and flexible.

Finnair is utilizing its Airbus A350-900 aircraft. First entering commercial service in 2015, the A350 is Airbus’ newest twin-aisle widebody passenger jet. Built mainly from carbon-composite materials, the A350 can achieve 25 percent lower fuel burn and operational costs. It is the first scheduled A350 service of any kind to PIT.

The arrival of Finnair, greeted with a water arch salute from firefighters for the inaugural flight, comes as PIT continues to see an increase in demand for air freight amid the coronavirus pandemic.

In March, the airport saw a 29 percent increase in cargo compared to 2020. Air freight rose by 27 percent while mail increased 37 percent.

The spike in air freight is attributed to cargo carriers utilizing larger aircraft and increasing the number of operations at PIT.

In December, Qatar Airways resumed its cargo operations at PIT and continues its weekly flight on a converted Boeing 777-300ER. Additionally, Cathay Pacific used a similar aircraft for cargo flights between Pittsburgh and Hong Kong that ran twice weekly from September to November of last year.

FedEx and UPS have also upped their operations at PIT, with the carriers increasing year-over-year flights by 46 percent and 83 percent, respectively, in March.

UPS has added an additional daytime flight from Louisville and added larger aircraft to existing flights. FedEx also increased its presence at PIT during the first quarter of 2021, which included additional weekday flights to Newark and Indianapolis.

At congested cargo gateways like New York and Chicago, airlines and freight forwarders often have to wait days to get their products offloaded and on the road. At PIT, that can happen in a matter of hours.

Cargo carriers have consistently referenced that speed as a major selling point to utilize PIT.

Plans to accelerate cargo expansion at PIT received a major boost when the U.S. Department of Transportation announced an $18.69 million BUILD grant to support the construction of a 75,000-square-foot cargo processing facility and an adjacent surface parking lot. That facility is in design.