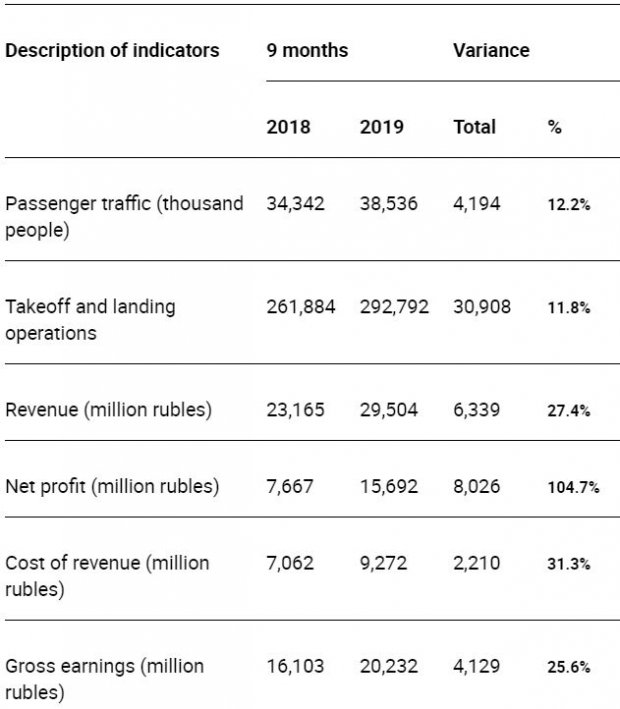 Increases in passenger traffic and takeoffs and landings at Sheremetyevo International airport helped Sheremetyevo JSC achieve significant growth in financial performance over the first nine months of 2019. Revenue under RAS volume to 29,504 million rubles, an increase of 27.4 percent compared to the same period in 2018 , including 36.2 percent in aviation activities and 14.9 percent in non-aviation activities. The growth in cost of revenue gained to 31.3 percent, or 9.272 million rubles.

Gross earnings of MASH JSC for the first nine months of 2019 finally to 20,232 million rubles, which exceeded the level of the same period in 2018 by 25.6 percent. The company net profit for the first nine months of 2019 measured to 15,692 million rubles, an increase of 104.7 percent compared to the same period in 2018, which was mainly due to the increase in aviation revenue and changes in exchange rates.

Sheremetyevo International Airport  is among the TOP-10 airport hubs in Europe, it is the largest Russian airport in terms of passenger and freight traffic. By the end of 2018, the airport served 45 million 836 thousand passengers, which is 14.3% more than in 2017.

By the end of 2018, Sheremetyevo became the best in quality of services in the category of the largest airports in Europe with the volume of passenger traffic more than 40 million per year according to the ASQ ACI program, and was among the top best airports in the world according to the International Council of Airports - ACI Director General's Roll of Excellence.

Sheremetyevo is recognized as the best airport in the world according to the global analytical study of the British company Stasher.

Sheremetyevo Airport is the holder of the highest 5-star Skytrax rating.

“has written More than 379,000 t of cargo and mail handled at Sheremetyevo Airport according to 2019 results”