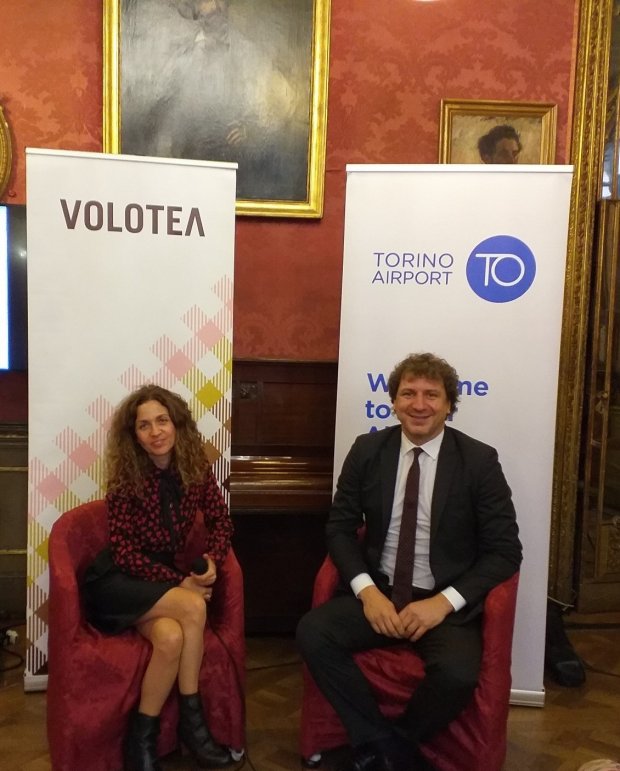 Turin, 21st October 2019 - Volotea, the airline that connects small and medium-sized cities in Europe, today announced the launch of 2 new routes for 2020 from Turin to Lamezia Terme and Mykonos (exclusive route). The company takes to the track in Turin with a total offer of 368,000 seats to fly to 9 destinations, 7 in Italy and 2 abroad.

Volotea has been operating in Turin since 2013 and, since the beginning of its activities, has transported 770,000 passengers locally. With the new routes, the reachable destinations from Torino Airport on board the aircraft of the carrier rise to 9, 5 of which are exclusive.

Excellent results were achieved this year: from January to September, in fact, over 206,000 passengers were transported by the carrier to the Airport of Turin (+ 49% compared to the same period in 2018), with a load factor of 96%. Finally, for the next year, the carrier is taking to the track in Turin with a total offer of 368,000 seats for sale, a 31% more than 2018.

"It is with great pleasure that we announce 2 new connections from Turin to Lamezia Terme and Mykonos - commented Valeria Rebasti, Volotea's Commercial Country Manager Italy & Southeastern Europe -. With the start of the new connection to and from Lamezia Terme, we will increase the flow of travelers to Turin, allowing those with friends or relatives living in Piedmont to reach them even more easily. On board our airplanes, Piedmontese holidaymakers can easily and quickly reach Mykonos, one of the most fascinating tourist resorts in the Mediterranean, to enjoy a holiday of sea, fun and good food. Thanks to the new routes, we therefore consolidate the portfolio of both domestic and international destinations that can be reached from Turin for a truly irresistible summer 2020 ".

"Today's meeting - said Andrea Andorno, Chief Executive Officer of Torino Airport - consolidates a relationship between Torino Airport and Volotea that has evolved over the years. From 2013 to today, Volotea has in fact recorded a constant increase in both the number of routes and the traffic generated at our airport. The two new destinations - Lamezia Terme and Mykonos - that Volotea will launch from next summer allow us to lay the foundations for a further expansion of the network and confirm that, thanks to strategic partners, it is possible to serve the Turin market better and better. In particular, the route to Greece allows us to respond to a demand for leisure tourism expressed by the Piedmontese territory towards one of the most popular destinations in the Mediterranean, until now not directly served by Turin; the connection to Lamezia Terme will instead be able to satisfy even the needs of those traveling to visit family and friends on one of the most important North-South Italian routes ".

For the summer of 2020 the bouquet of destinations reachable from Turin includes 9 destinations (5 exclusive), 7 Italian - Cagliari, Olbia, Lampedusa, Naples, Pantelleria, Palermo and Lamezia Terme (new 2020) - and 2 abroad – Skiathos and Mykonos (new 2020) in Greece.

All routes to and from Turin are available on the website www.volotea.com, in travel agencies or by calling the Volotea call center on 895 895 44 04.