Tampere-Malaga is “Skyscanner Unserved Route of the Week” with over 16,000 searches; Finnair’s next regional route?? 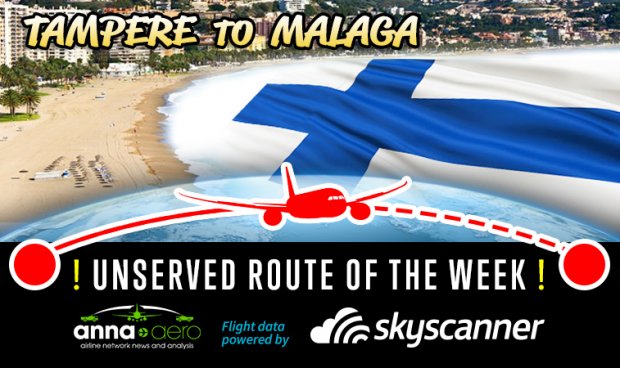 With over 16,000 searches in the last 12 months, a potential city pair from Tampere to Malaga has been identified as this week’s “Skyscanner-anna.aero Unserved Route of Week” – a powerful analysis based on aspirational data captured from the Skyscanner.net flight comparison site used by +60 million unique visitors per month. “There are so many Finns in the Malaga area that it can almost be called ‘Little Finland’ over there,” says Marja Aalto, Director, Air Transportation Development, Business Tampere. “In the Costa del Sol area officially there are 15,000 Finns who are permanent residents, the unofficial estimation is that 30,000 Finns are living there year-round.”

anna.aero recommends Finnair or Ryanair to return on this route

Skyscanner demand on this week’s unserved route shows a bias towards the Tampere end of the city pair, with a 88/12 split, so on this basis we looked at potential carriers at the Finnish origin first. According to OAG schedules for the week commencing 13 October, the largest carrier at Tampere is unsurprisingly Finnair (37% share of weekly seats). The airline’s limited non-stop route network from Tampere currently consists of just one destination – a 23 times weekly service to the capital city Helsinki. Although it does not serve the Costa del Sol city from any other Finnish airport, the oneworld carrier presently offers nine weekly frequencies from its main hub to Malaga, so it must be aware of the significant traffic flows from Tampere connecting in Helsinki to the Spanish destination. Indeed this summer Finnair has added Spanish services to the likes of Alicante, Ibiza and Menorca from Helsinki, so it might only be a matter of time before its begins looking at introducing these destinations from Finnish regional airports. In fact it is planning to start seasonal weekly Palma de Mallorca flights in June 2018 to Oulo, Finland’s second busiest airport. “It has been a very, very long time ago since they [Finnair] had anything else from Tampere. I guess most people don’t even remember any more,” adds Aalto.

Tampere’s second biggest carrier is SAS (30% share of weekly capacity), but similar to Finnair, it uses the airport merely as a spoke to connect 18 times weekly to its Stockholm Arlanda hub. Perhaps a better hope would be to convince the airport’s third largest carrier – Ryanair – to begin services from Malaga again, which is its 11th largest operation according to OAG data. In terms of its existing Nordic operations from the Spanish airport, it currently flies to Copenhagen (six times weekly), Billund (five), Oslo Torp (four), Gothenburg, Stockholm Skavsta (both three), Stockholm Vasteras and Haugesund (both twice-weekly). The ULCC did serve the route until November 2015, so with this new Skyscanner data on this city pair now being made public, perhaps Malaga will return as a destination on Ryanair’s network map in 2018.

Considering the Malaga end of the route, the airport’s #1 capacity provider of its 45 serving airlines is in fact also the Irish ULCC, controlling 23% of weekly seats. Unlike its nemesis, the second largest operator at the Spanish airport, which is easyJet, presently has no flights to the Nordic region from Malaga (neither does the #3 carrier Vueling), so perhaps a route to Tampere is a way off the radar yet for the LCC. A better option could well be Norwegian, the fourth biggest airline at Malaga, which has a far greater presence in the Nordic region (as you would expect) with operations to Copenhagen (double-daily), Arlanda (11 times weekly), Oslo Gardermoen (10), Helsinki (eight), Aalborg (three), Gothenburg, Torp, Trondheim (all twice-weekly), Stavanger and Bergen (both weekly). Given its network depth in the Nordic area, it would not represent a huge strategy shift for the LCC to add Tampere as its 11th airport pair between the markets.

When looking at the previous year of search data, the busiest month for potential traffic flows (for both directions on the route combined) is January 2017, with nearly 1,900 searches, over 1,100 higher than the lowest monthly figure, which was recorded in December 2016 (800 searches). The seasonality profile of this search data is slightly less extreme than the last Unserved Route of the Week (Cologne Bonn to Belgrade), with the low-month traffic representing 40% of the highest month. According to OAG Traffic Analyser, because there is no direct service, the top two connecting options chosen by those passengers who did book travel between Tampere and Malaga in the last 12 months (year ending August 2017) indicates that the majority of connecting travellers used Helsinki (47%) and Arlanda (44%).

Indeed, an O&D that is not served by a non-stop flight will typically display a low purchase rate and low traffic. In this instance Skyscanner’s Travel Insight indicates a monthly average of 2.0% for the Tampere to Malaga route (see graph below). Therefore, if there was a Tampere to Malaga route, and if bookings performed in line with the “Skyscanner market average” for direct services at both airports (7.5%), the airline operating this route could immediately expect an improved purchase rate of 275%, without any increased marketing spend. However, with over 16,000 annual searches in the past year, a weekly or twice-weekly service should be immediately viable for the airline choosing to start this potential city pair. “With a good connection, Tampere-Malaga will be an excellent choice for people traveling to the Costa del Sol from Central Finland,” concludes Aalto.

About this anna.aero analysis and Skyscanner data

“Skyscanner” packages this amazing B2C data into a suite of business products which offer comprehensive data solutions – our specific need to identify unserved routes uses the Skyscanner Travel Insight product, a comprehensive, unique ‘big data’ set that can accurately predict future demand by telling you where 60 million real living-and-breathing travellers actually want to fly to. (And bear in mind that there are other significant search volumes that could also be added to the Skyscanner totals – from dedicated airline websites, competitive search engines etc, underlining the value of Skyscanner data as a conservative indicator of market route demand.)

Check next week’s newsletter for another great anna.aero-Skyscanner “Unserved Route of the Week” – or browse in anna.aero’s Route Shop where there are 3,100 more unserved routes.