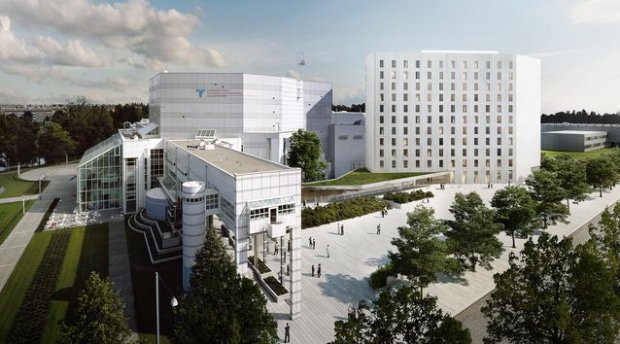 At the end of 2019, the Marriott International hotel chain will open its first hotel in Finland in connection with Tampere Hall. The hotel to be built in Tampere is part of the Courtyard by Marriott hotel brand, which is directed at modern business travellers and families. In the Tampere Courtyard by Marriott hotel, there will be 11 aboveground floors and 229 hotel rooms. Reservations for rooms can be made starting 6 months before the hotel opens. The hotel project is expected to have a great impact on Finland’s attractiveness and the international recognition of the entire country.

- It is important for Marriott International to establish a larger presence in the Nordic Countries and particularly in Finland. Tampere is one of the central cities in the country. It is a growing and vibrant city whose multiple development projects promise an interesting future for it. We expect our hotel to attract visitors and events to Tampere from across the world, describes Tuomas Laakso, the development manager of Marriott International in Central and Northern Europe.

Lauri Lyly, the mayor of Tampere, is pleased with the fact that of all the cities in Finland, Tampere is the place where the first Marriot hotel will be opened:

- The hotel will give a nice internationality boost to our city, and it will make a great addition to our event, culture, and travel offering. The Marriot hotel chain has over 100 million loyal customers around the world, and now they will have a good reason to come to Tampere, says Lyly.

The CEO of Tampere Hall, Paulina Ahokas, stresses the fact that the hotel will further improve the already comprehensive service selection provided for conference and congress visitors and increase the attractiveness of the largest culture and congress centre in the Nordic Countries:

- Tampere Hall, the Moomin Museum, and the Tampere Philharmonic Orchestra annually attract hundreds of thousands of visitors, and now that the world’s largest hotel chain is arriving in Tampere to complete this ensemble, it feels like we have hit the veritable jackpot. From now on, we will be able to host, for instance, major international conferences in a whole new way.

A connecting corridor will be built between the entrance hall of Tampere Hall and the Tampere Courtyard by Marriott hotel, and the conference and congress services will remain in Tampere Hall. In addition, Yliopistokiinteistöt, Tampere Hall, and the City of Tampere are currently investigating the possibility of building a tunnel connection from the hotel to the campus of the University of Tampere, which is located on the other side of the Kalevantie road.

A total of 229 hotel rooms and restaurant and gym services have been outlined for the Tampere Marriot hotel. Keva, the Finnish public sector pensions institution, will purchase the site for the hotel from the City of Tampere at fair market value. The construction of the hotel will commence immediately after the construction licence has been granted. The estimated construction time for the project is 18 months.

The architecture firm ALA Architects will be responsible for designing the hotel. The investment will be made by Marriott International with Odyssey Hotel Group as its commercial partner. SRV Rakennus Oy will be responsible for the construction work. The hotel project began already in 2013, but it has been delayed from its original schedule due to the rapid expansion of Marriott International and related major development projects.