Asian low-cost giant, AirAsia has applied to regulators for approval to launch a new low-cost venture in India in a joint venture partnership with the Tata Group and Indian investor Arun Bhatia.  The Malaysia-based airline this week submitted an application to the Indian Foreign Investment Promotion Board (FIPB) for approval to take a 49 per cent stake in the new venture with Bhatia, owner of Hindustan Aerosystems Pvt. Ltd through his investment company Telestra Tradeplace and Tata Sons Ltd, a part of the Tata group.

The application follows a groundbreaking decision by the Indian Government in the second half of last year to allow up to a 49 per cent investment by foreign companies in the aviation sector, which has led to talks between Etihad Airways and Jet Airways over a close co-operation, while Deccan Charter’s Captain GR Gopinath, one of the original pioneers of low-cost aviation in the country, is in talks to launch a new low-cost carrier with foreign backing later this year after a bond over his role in the scheduled passenger business following the sale of Air Deccan to Kingfisher Airlines expired.

“We have carefully evaluated developments in India over the last few years and strongly believe that the current environment is perfect to introduce AirAsia’s low fares which stimulate travel and grow the market.”

Subject to FIPB approval, which is expected to be around a one month process, the proposed joint venture will make an application to Indian aviation regulators for an Air Operators Permit.  AirAsia said the parties had signed a Memorandum of Agreement that details high-level terms with regards to the proposed partnership.  “We have carefully evaluated developments in India over the last few years and strongly believe that the current environment is perfect to introduce AirAsia’s low fares which stimulate travel and grow the market,” said Tony Fernandes, Founder and Group Chief Executive Officer, AirAsia.

The start-up, to be branded AirAsia India, will operate from the city of Chennai in the southern state of Tamil Nadu and will initially link smaller cities to the regional metropolis, mainly Tier 2 airports already permitted to accept the Airbus A320.  Although Air Asia currently offers flights into India it has found it difficult to compete with the local carriers leading to the closure of some routes, most notably those of its AirAsia X long-haul division from Kuala Lumpur to Delhi and Mumbai.

In a media call this week, Tony Fernandes confirmed that AirAsia has had a tough time in India in the past but this proposed expansion into India’s domestic market has been something that has been discussed internally for the past three years within AirAsia Group’s headquarters.  “It has been tough for us to develop a low-cost structure to compete effectively in India, but we now have the recipe to achieve this,” he said.

This is where the carrier’s partnership with the highly-regarded Tata Group comes into play.  Fernandes acknowledges that although it has the operational expertise it will have to rely on its joint venture partners to provide the insight into the Indian way of life and travelling habits.  “We have formidable partners that understand the Indian market and we can leverage on one another’s strengths,” he explained.

Although AirAsia has a respected brand, Fernandes knows that price will be the main differentiator in the Indian venture and will be the main selling point for the start-up.  “Let’s not kid ourselves, the main thing that will drive passengers is price,” he said.  “We have a strong brand loyalty, a good distribution system and Asian route network but the key is the right cost structure so we can offer the right fares to stimulate the massive Indian domestic market to fly.”

“There is a monstrous market opportunity in India.  If you add up all the aircraft in India it doesn’t match the number currently in Malaysia, yet the population is around 50 times larger.  This is a huge opportunity but requires change.  We haven’t jumped in quickly.  We have done our homework and go into the domestic market with our eyes wide open,” he added.

Fernandes believes that a number of failures in the Indian market have been due to the fact that cost levels and therefore fare levels haven’t been low enough.  “We looked at all the cost structures of the existing Indian operators but felt growing organically with our own partnership was the stronger option.  This is primarily what we have always done,” he said.  The carrier will launch with an initial investment of between $30 million and $50 million. “How fast we expand is up to how fast we grow and how successful the business is.  This model has worked well in our other joint ventures,” said Fernandes.

AirAsia made its debut in India in December 2008 when it launched daily flights to Tiruchirapally from its Kuala Lumpur base.  The group now serves five points in the country with AirAsia operations from Kuala Lumpur to Chennai, Kochi, Kolkata and Tiruchirapally and by Thai AirAsia from Bangkok Don Muang to Bangalore, Chennai and Kolkata.  It has also previously served Gaya, Hyderabad and Thiruvananthapuram.

“There is a monstrous market opportunity in India.  If you add up all the aircraft in India it doesn’t match the number currently in Malaysia, yet the population is around 50 times larger.  This is a huge opportunity but requires change.  We haven’t jumped in quickly.  We have done our homework and go into the domestic market with our eyes wide open.”

The start-up will initially launch with “three or four” A320s, according to Fernandes, but will “scale-up relatively quickly after that,” he explained.  The formal start of operations is dependent on final regulatory approval but Fernandes is confident the venture will take to the air before year-end with a fourth quarter tentative start date planned.  “We are ready as soon as we get the approvals,” he said.  The carrier will use some of the aircraft already ordered by the group, but the growth could lead to yet more aircraft being added to AirAsia’s already burgeoning orderbook.  “A number of our new deliveries are already allocated to other ventures across the AirAsia group, but we do have access to Airbus to increase on our order if necessary,” explained Fernandes.

Although no confirmed route plans have been divulged, AirAsia India has already completed a review of a number of likely destinations, already ruling number of high-cost airports out of its plans.  “Certain airports we will avoid due to their high charge structure but we have developed innovative ways to stimulate markets we don’t even serve,” said Fernandes.  “We wouldn’t see Mumbai, for example, as a main destination.  However, even Delhi has a kind of low-cost terminal offering.  We would be happy to work with any of these high-cost facilities on the possibility of low-cost infrastructure.”

The airline has already recruited its senior management team, including a Chief Executive who will lead the business and more details are expected to be revealed in the coming weeks, although Fernandes noted that the majority of positions will be held by Indian citizens, highlighting the abundance of skilled and experienced personnel available.  The company is expected to have an initial workforce of around 300 and expects to add around 20 additional workers for each new aircraft addition.

The selection of Chennai International Airport as the operational base for AirAsia India is a logical move given the brand’s presence in this part of India.  AirAsia launched flights to Chennai from its Kuala Lumpur base in April 2010, while Thai AirAsia added flights from Bangkok in March 2012, initially from the main Suvarnabhumi International Airport but more recently from Don Muang.  Alongside point-to-point demand the start-up will be able to leverage the demand for transfer traffic to two Asian capitals to support its initial network.  “Chennai was an obvious choice for the venture.  We already fly there and know the southern market fairly well,” said Fernandes.

These existing operations will play an important role in AirAsia India’s growth aspirations.  Under Indian regulatory conditions all domestic ventures must prove themselves in the local market before they are permitted to fly outside of the country.  This is currently set at a five year period but Fernandes suggests this may change.  “Our advantage is that we already have sister airlines across Asia that can fly into India.  As a group we effectively will be able to serve domestic and international markets,” he said. 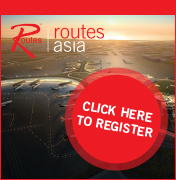 In the table below we highlight the largest domestic and international operators from Chennai International Airport in 2012.  The domestic market from Chennai is pretty equally split between the operations of low-cost ventures SpiceJet (23.4 per cent), Jet Airways (22.0 per cent) and IndiGo (20.0 per cent).  The international market is split between local carriers Air India and Jet Airways and foreign ventures Emirates Airline and SriLankan Airlines.  AirAsia already accounts for five per cent of the international capacity through its existing flights to Kuala Lumpur, increasing to 6.4 per cent when you include the flights of the Thai AirAsia venture.