El Salvador hopes that recent new air services from Aeromexico, Iberia and Spirit Airlines into the country will be just the start of a major expansion that will see enhanced connectivity with the rest of the world and Routes Americas could play an important role in helping it achieve its growth ambitions.

“We are convinced of the great potential we have as a country to do business and to continue growing in tourism and air connectivity. Routes Americas 2014 will be a major development for the country as a tourist destination for the Americas and the world,” José Napoleón Duarte Durán, El Salvador's Minister of Tourism told a packed audience during a welcome address to officially open this year’s forum, which is being hosted by the recently established Ministry of Tourism El Salvador (MITUR) and Salvadoran tourism corporation Corsatur.

MITUR has been set up with a clear mission to promote and position El Salvador domestically and internationally as a tourist destination that is sustainable, attractive and competitive.  Tourism is a key driver of the Economy in the Central American country and enhanced air connectivity will only increase the role it will play in the future.

“El Salvador in the last four years has seen major changes in connectivity with the purpose of expanding the flow of tourists, and recognisable airlines have begun operations in the country with great success.  In total 10 airlines now operate into El Salvador International Airport,” he said.

“This has allowed us to record a growth of 44.5 per cent in the air flow of visitors between 2009 and 2013, a positive development which has forced us to expand our main airport to accommodate twice its current capacity of two million passengers,” he added.

El Salvador Minister of Tourism José Napoleón Duarte Durán, reveals Routes Americas meeting was one of the best of his life!

In order to meet growing demand airport operator, Comisión Ejecutiva Portuaria Autónoma (CEPA) is initially making upgrades to the existing terminal structure at the recently renamed Óscar Arnulfo Romero International Airport in San Salvador, but revealed a four-phase $492.7 million project that will run between 2014 and 2032 as part of a revised masterplan launched in December last year.

Although this does not include the construction of a new terminal structure it will significantly expand the existing building and boost passenger capacity in the first phase (2014 -2017) to 3.6 million and ultimately to 6.6 million by 2032 when the existing number of gates will more than double from a current 17 to over 40.

“To host Routes Americas 2014 represents an important platform for tourism development projects that the country has been working on over the years through air connectivity,” explained José Napoleón Duarte Durán.  “It also provides an opportunity for all participants to establish relationships with others related to aviation who are interested in flying to, from and within the Americas with the purpose of meeting and doing business as well as shaping the future of this industry. I feel that the main goal of this event is also to negotiate new air routes and increase frequencies.”

Within Central America, El Salvador is a strategic country due to the fact that its house the hub of the main airline in the region: Avianca Central America, formerly TACA, but the Minister understand the need to attract other operators to meet growing demand in today’s modern society.  “Markets around the world have changed; today everything is moving much faster with the advent of the Internet and more recently social media,” he said. 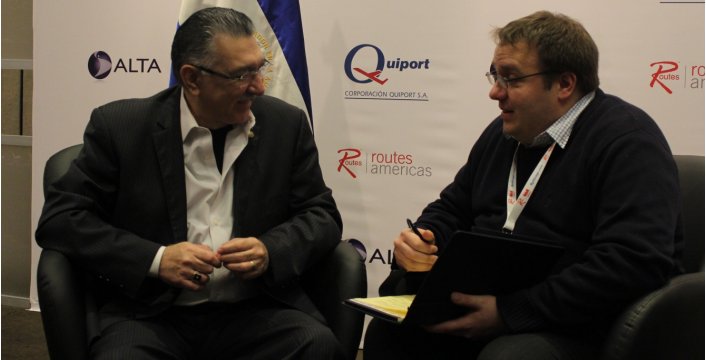 The North American markets of Canada, USA and Mexico have for a long time been important to El Salvador but new markets across South America and even as far afield as Europe are being opened.  “We took the decision to break the barriers with Colombia and eliminate visas and immediately have seen demand more than double,” said José Napoleón Duarte Durán.  Similar exercises are understood to be under consideration for Brazil, Ecuador and Peru in the future.

However, he highlights new cruise ship connectivity and the arrival of Iberia in the country as two of the key developments during his almost five years as Minister.  “Four years ago we didn’t have these links, but now we do.  We have broken down those barriers and opened new market opportunities to El Salvador,” he said.  The arrival of Iberia has seen the flow of tourists from Europe to El Salvador increase by 72 per cent, according to government statistics.  A growth of more than 25% was also recorded on visitors from North America and Mexico when Spirit Airlines and Aeromexico inaugurated their new links to San Salvador.

“This is a country of great opportunities for business, investment and tourism.  We are a distinct destination in which our main asset are the people; a country that always greets you with a smile.  This is El Salvador today and every more the El Salvador of the future will be a country that will be an important logistical and tourist destination.  But, we know we need to invest, if you are not competitive you have no future,” he added.