After a record event in San Salvador which saw 487 delegates registered to attend the event, more than ever before, the Ministry of Tourism El Salvador have officially handed the event over to Denver the host destination for the 8th Routes Americas event.

Building on the success of this year’s event, the route development forum for the entire Americas region, which now incorporates Network USA, will take place 1-3 February 2015 hosted by Denver International Airport, supported by Visit Denver. This will mark the first time that Routes Americas will be held in North America.

Adrian Newton, Group Director Transport and Technology at UBM Live, organisers of Routes Americas said: “Following this year’s successful event here in San Salvador we are thrilled to be taking Routes Americas to Denver and to North America for the first time next year. Denver International Airport offers unparalleled air service options for our delegates and we feel that Routes Americas has potential for even more growth in 2015.  In addition, Denver International Airport will celebrate its 20th anniversary in February 2015 and bringing the aviation community of the Americas to the ‘Mile High’ city in the same month will be a fitting celebration of this landmark event.” 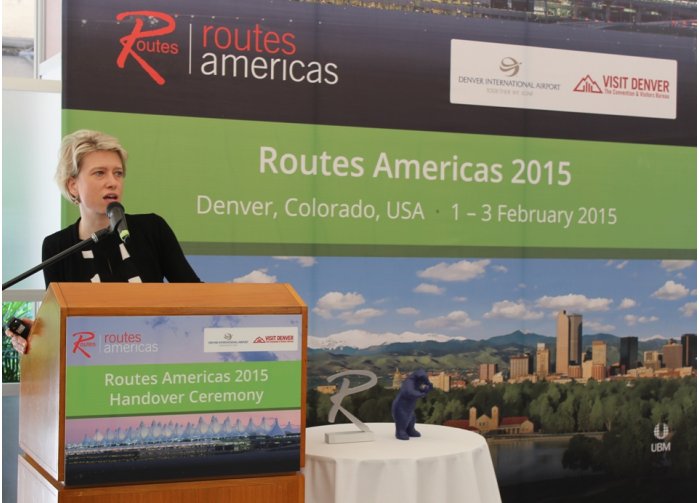 Denver, known as the Mile High city due to its position above sea level, benefits from 300 days of sunshine a year.  Located east of a major mountain range the city has an iconic skyline positioned against the stunning backdrop of the Rocky Mountains.  In addition, the city is located just 340miles (547 kilometres) from the exact centre of the continental United States – closer to the centre of the nation than any other city of its size. Coupled with an impressive air service, Denver also has a very strong public ground transportation system that connects the metropolitan area’s three million residents.

Denver International Airport will celebrate its 20th anniversary on 28 February 2015 and, in addition, the first major expansion to Denver International since 1995 is currently underway and will be completed in the first half of 2015. The South Terminal Redevelopment Program (STRP) will include the development of a new hotel and conference centre, public transit centre and public plaza for community programming and events that connects the development to the existing Jeppesen Terminal.