A successful Routes Europe event will come to a close today in Marseille, and preliminary data suggests it has seen a record number of delegates descend on the city to discuss the future of Europe’s air traffic, making this year’s event the largest regional route development event ever.

At lunchtime today the forum will be officially handed over to Aberdeen City and Shire, the host of the 2015 event, at a ceremony that is due to be attended by Lord Provost of Aberdeen George Adam, Aberdeenshire Provost Jill Webster and Aberdeen International Airport managing director Carol Benzie.  The event which will take place at the Aberdeen Exhibition and Conference Centre (AECC) from 12-14 April 2015.

Speaking to The HUB Daily yesterday ahead of today's ceremony, Lord Provest George Adam said: "There is a palpable excitement building about Aberdeen and Aberdeenshire hosting Routes Europe next year. Aberdeen International Airport is growing at a fantastic rate, with two new air services taking off in the last week alone. Aberdeen is playing in a league of much bigger cities than previously, competing with the likes of Marseille and Berlin. When we won the bid to host Routes Europe 2015, we said it was a huge vote of confidence in the economy of Aberdeen and its future. The support and excitement the news has attracted within the city region, Scotland and the UK is a clear demonstration of that confidence.”

An ambitious £15 million redevelopment is already underway at Aberdeen International Airport (AIA), designed to transform the customer experience. The project comes hot on the heels of a 24 per cent increase in passenger numbers since 2011, the addition of a number of new routes including Corfu and Riga, and saw the airport enjoy its busiest ever year last year.  Passenger numbers are forecast to grow further in the coming decade and this significant investment will ensure the team can continue to deliver excellence in customer service. With 65 per cent of its passengers using the airport for business trip purposes, AIA is the best connected regional airport in the UK for daily hub connections and the best connected UK-UK airport in the country.

Speaking to The HUB Daily last night Aberdeen International Airport's managing diector, Carol Benzie said: “I am looking forward to being on stage as the handover takes place, and all eyes firmly look to Aberdeen as we prepare for 2015. The arrival of the event in the North-east of Scotland next year will mean a lot for the airport and the wider region that we serve. We hope that by bringing the aviation industry to our doorstep they will see the benefits of doing business with us, and we look forward to giving them a good Scottish welcome.”

Aberdeen is the gateway to Scotland’s castle and whisky country. Scotland’s Castle trail runs through the heart of Aberdeenshire and the region is home to 13 of the world’s most unique castles. Aberdeen is also known as ‘the Granite City’ named for its sparkling buildings, built from locally quarried grey granite, and elegant architecture. The city’s old town, Old Aberdeen, dates back to the 1400s and is home to the oldest granite cathedral in the world, St Machar’s Cathedral. The City, which is home to around 250,000 inhabitants, is within 15 minutes of the stunning countryside which surrounds Aberdeen and is also the capital of the Grampian Highlands with the majestic Grampian Mountains dominating the skyline to the west and miles of unspoiled coastline to the east.

“Routes Europe is the largest of our regional events and we have experienced significant growth this year with 115 airlines, 380 airports and over 1200 delegates in total,” said Katie Bland, Director Routes for UBM Live.  “When the event moves to Aberdeen next year, delegates will experience the economically vibrant region of the North-East of Scotland and the multitude of business and leisure opportunities on offer. Aberdeen International Airport is already well connected across Europe and will allow easy access for delegates. We are looking forward to working with the Aberdeen team and to the 10th Routes Europe in 2015.” 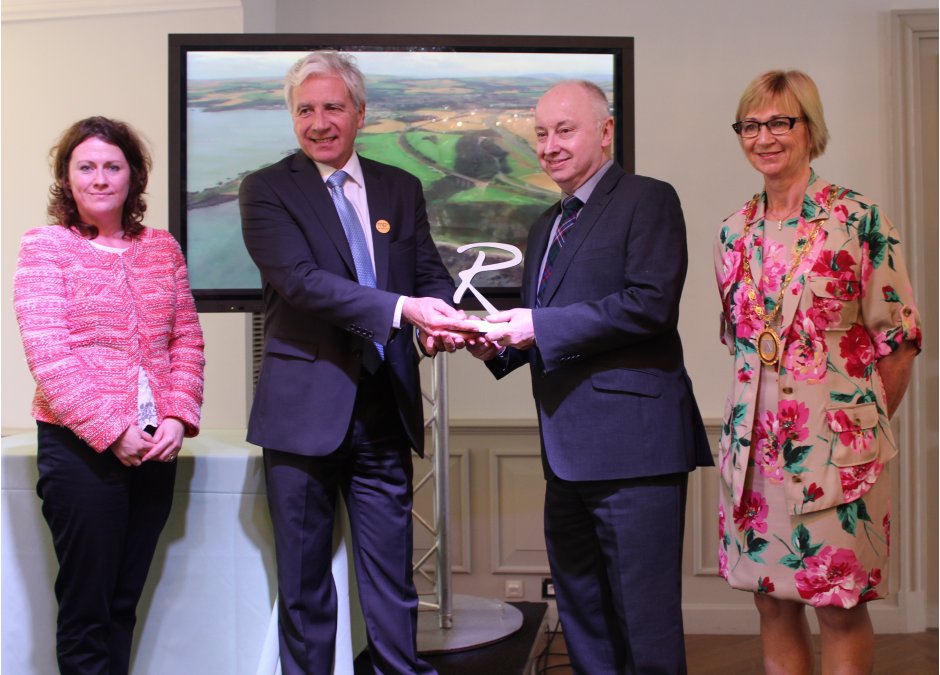