United Arab Emirates (UAE) national carrier Etihad Airways and expanding Asian operator Philippine Airlines (PAL) have signed a Memorandum of Understanding (MoU) that marks a new era of cooperation between the flag carriers. The MoU lays the foundation for a renewed partnership agreement that is expected to deliver a range of commercial benefits to the airlines and their customers. Included in its scope are codesharing, frequent flyer reciprocity, airport lounge access, air pass agreements, and cargo cooperation.

The MoU with Philippine Airlines is an important milestone in the long-standing relationship between the two flag carriers as well as ties between Abu Dhabi and the Philippines. More than 700,000 Filipinos live in the UAE and account for much of the traffic on the Abu Dhabi - Manila route each year, one of the busiest routes in the entire Etihad network. It will also help to boost the number of leisure travellers to the Philippines – in particular from the Middle East and Europe, part of the Philippine Department of Tourism’s plans to boost tourism arrivals. 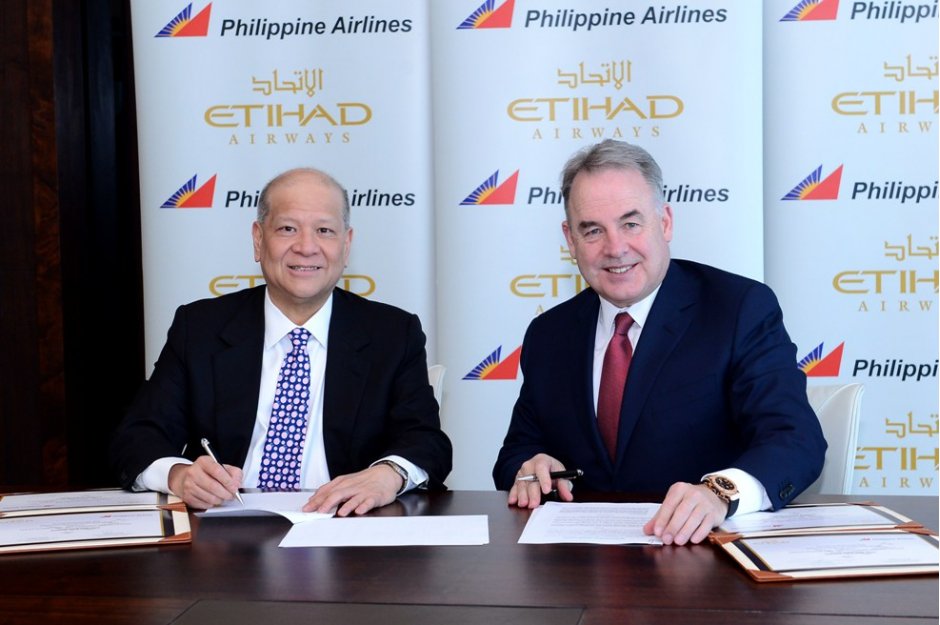 “The MoU symbolises our shared commitment to growing the passenger and cargo market between the UAE and Philippines and fostering closer diplomatic, trade and cultural ties. Closer collaboration in our home markets and in the global arena will enhance the competitiveness and appeal of our offering and deliver an unrivalled customer proposition in the UAE, in the Philippines and abroad,” he added.

According to Ramon S Ang, president and chief operating officer, Philippine Airlines, the relationship will go a long way in providing the two carriers’ combined customer base a much more enhanced set of travel options. This also comes at an opportune time for the Asian carrier which is in the thick of a fleet modernisation and expansion program that will see the flag carrier pushing further not only into the Middle East but also on other parts of the globe using its new fleet of aircraft.

There is also significant potential for both airlines to increase the volume and value of trade between the two nations. Two-way trade between the UAE and the Philippines was valued at $US1.4 billion in 2013 and the UAE is the Philippines’ third-largest trading partner in the Middle East. “Closer cooperation in the cargo arena, one of Etihad Airways’ most successful divisions, has the potential to boost each airline’s bottom-line and the economies of our two great nations,” said Hogan.

Etihad Airways launched services between Abu Dhabi and Manila with a four times weekly link in February 2006 using its Airbus A330-200s. Now, the airline offers twice-daily Boeing 777-300ER flights between the capitals and last year the Abu Dhabi - Manila route was the airline’s second busiest route (547,680 passengers) in its global network.  In our analysis below we look at the strong O&D flows between Philippines and the UAE which is supported by the large diaspora in the Gulf state.

In addition to its closer ties with Philippine Airlines, Etihad Airways will also boost its flights within the Middle East from the start of July with additional flights to Amman, Jordan and Beirut, Lebanon. The UAE carrier will build on the success of the existing service and increase the frequency of its routes from Abu Dhabi from 18 flights per week to triple daily schedules from July 2, 2014. The flights will be operated with an A320 aircraft fitted with 16 Pearl Business Class seats and 120 Coral Economy Class seats.

“The Middle East network has been performing strongly. This increase in our services is indicative of the huge confidence we have in this important regional market,” said Hogan. “We have steadily increased frequencies on both routes in line with strong demand, not only to the capital of the UAE, but also via Abu Dhabi to and from key destinations in Asia and Australia.

Etihad started its operations to Beirut in November 2003, the airline’s first commercial route followed by services to the Jordanian capital Amman in December 2003 and has carried 2.1 million travellers since then on both routes.