Canadian budget carrier WestJet Airlines has confirmed it will launch a twice-daily, non-stop service between Toronto and Fredericton, New Brunswick, from April 15, 2015. The new domestic route will be flown by its regional division WestJet Encore and will be its first link into the Maritime Provinces as it expands further to the East.

The airline says WestJet Encore's move eastward is part of a strategic plan to “continue to liberate Canadians in smaller communities from the high cost of air travel,” continuing WestJet’s own pioneering developments in the larger Canadian markets through its 18-year history. The first step of this Eastern Encore expansion saw the introduction of flights to Ontario from June 27, 2014.

"We are very pleased to bring our low fares, high value and remarkable WestJet guest experience to the capital of New Brunswick for the first time, and we look forward to offering residents of Fredericton and the surrounding area the opportunity to take advantage of WestJet's growing domestic, transborder and international network,” explained Ferio Pugliese, executive vice president, WestJet and president, WestJet Encore.

The arrival of WestJet Encore into the Toronto – Fredericton market will end the monopoly of Air Canada. The national carrier offers up to four flights a day on the route also using Dash 8-Q400 turboprops with a fifth frequency operating in July and August.

"We are delighted Fredericton has been chosen as the first destination to receive WestJet Encore in the Maritime Provinces," said David Innes, president and chief executive officer, Fredericton International Airport. "Our region has tremendous vitality and access to WestJet service was identified by our passengers as a high priority during our Community Air Access Strategy discussions in 2013."

WestJet Encore recently celebrated the first anniversary of its launch. The regional brand inaugurated operations in June 2013 with ten daily departures to two destinations with an initial fleet of two Q400s. It now operates 90 departures daily to 19 destinations with 12 aircraft and further network changes will see this grow.  This inforgraphic below highlights the growth during its first 12 months of operation. 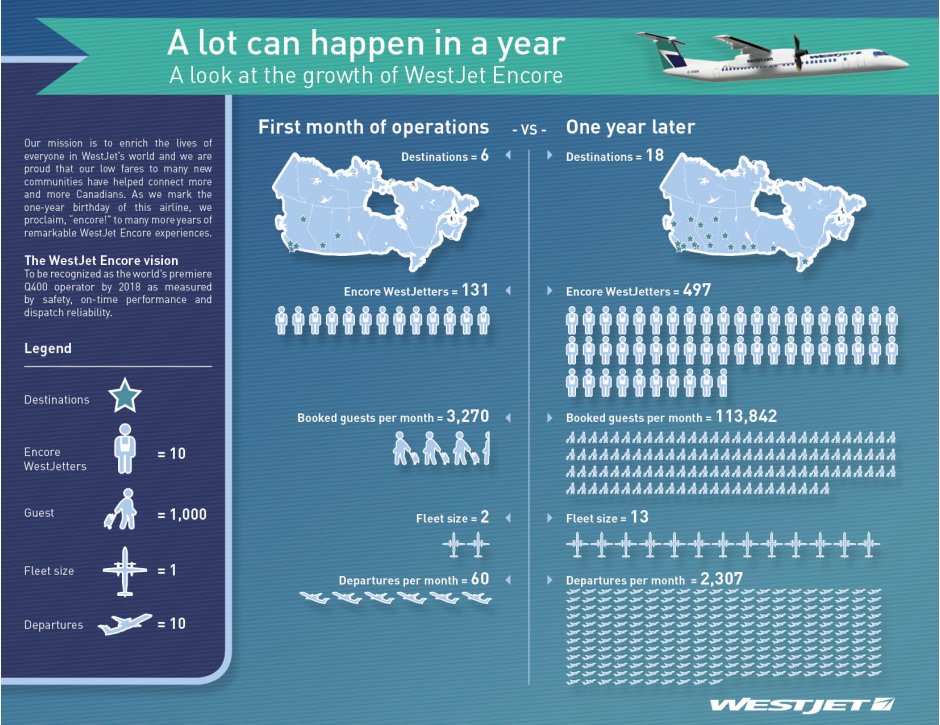 Over the coming winter schedule WestJet Encore will begin operating a number of new routes, either along with or instead of the mainline WestJet business. From October 26, 2014 it will introduce a daily Calgary – Penticton operation and will replace WestJet on the daily Calgary – Prince George route.

In our analysis, below, we look at the available annual bi-directional capacity between Toronto and Fredericton over the past ten years. Overall capacity between the two destinations has risen 80.5 per cent between 2004 and 2013, an average annual growth rate of 8.9 per cent. Last year capacity rose 7.7 per cent to over 200,000 seats for the first time and published schedules for 2014 suggest a 5.7 per cent growth in 2014 to almost 220,000 seats.