United States domestic air travellers could face a summer of higher fares thanks to a reduction in airline capacity exacerbated by the US government’s American Airlines - US Airways merger settlement. This is the view of OAG, a provider of aviation intelligence, based on an analysis of US domestic airline schedules for August 2014 and recent trends in airline load factors.

“The North American domestic market is the only region in the world that will see a decline in airline capacity this month,” said John Grant, executive vice president of OAG. “Even though we are entering the peak US holiday season, domestic seat capacity will be down one per cent versus a year ago, meaning about 25,000 fewer seats per day. A contributory factor is slot divestitures by American Airlines-US Airways that were required by the Department of Justice, which other carriers are failing to fully absorb.”

As part of the merger settlement announced by the Department of Justice (DOJ) in November 2013, American Airlines and US Airways agreed to give up several hundred slots at seven constrained airports across the US, including La Guardia (New York), Miami and Chicago O’Hare.

“The DOJ intended the divested slots for low-cost carriers, such as JetBlue Airways and Southwest Airlines, to keep prices low for consumers and offset airline consolidation,” said Grant. However, such policy actions are often “blunt instruments,” according to the executive. This month’s schedules on OAG reveal American/US Airways, Delta Air Lines and United Airlines all show seat capacity reductions, but, overall, low-cost carriers have failed to increase their capacity versus August 2013 in the domestic market.

“Meanwhile, domestic US airline load factors have been rising steadily for the past five years. The combination of reduced capacity in the peak month of August and rising load factors may well lead to higher fares for passengers as carriers seek to manage demand,” added Grant.

The one per cent fall in US domestic capacity between August 2014 and August 2013 is broadly composed of lower capacity among the three big US majors (American/US Airways, Delta and United) and an increase in capacity among the larger low-cost carriers (LCCs) and larger full-service carriers, according to the statistics from OAG.

Between them, American/US Airways, Delta and United will offer 600,000 fewer seats than in August 2013. American Airlines will reduce seats by 196,000, while US Airways will actually increase capacity by 31,000 seats, leading to a net loss of 166,000 seats. The merged entity will therefore operate only 0.9 per cent fewer seats this month compared to August 2013.

Low-Cost carriers will maintain capacity at a similar level to last August, although increases are being made at Southwest Airlines (four per cent), JetBlue (two per cent), Spirit (15 per cent) and Frontier Airlines (13 per cent). AirTran will see capacity fall by more than 50 per cent as it progresses towards full integration with Southwest; the combined Southwest/AirTran position will be a three per cent reduction in seat capacity, according to OAG.

“Despite some significant additional seat capacity from some airlines, the sheer dominance of the biggest carriers means these increases make relatively little impact on airline market share. In fact, between August 2013 and August 2014 the share of domestic seats operated by the top ten carriers grew from 94 per cent to 96 per cent, meaning the market is now more concentrated than it was a year ago,” added Grant.

According to data from OAG’s DOT Analyser – the latest addition to the OAG Analyser product suite, which consolidates three key datasets (T100, Form 41 and O&D Reports) – load factors in the US domestic market have been rising steadily year-on-year for the past five years. For example, United Airlines recorded an average load factor of 81.2 per cent in the 12 months to April 2010, and this has risen in each subsequent 12-month period except one. At Spirit and Frontier, load factors have reached 87 per cent and 91 per cent, respectively.

OAG’s analysis of the U.S. domestic airline market is outlined in OAG’s FACTS (Frequency and Capacity Trend Statistics) report for August 2014, which can be viewed here. 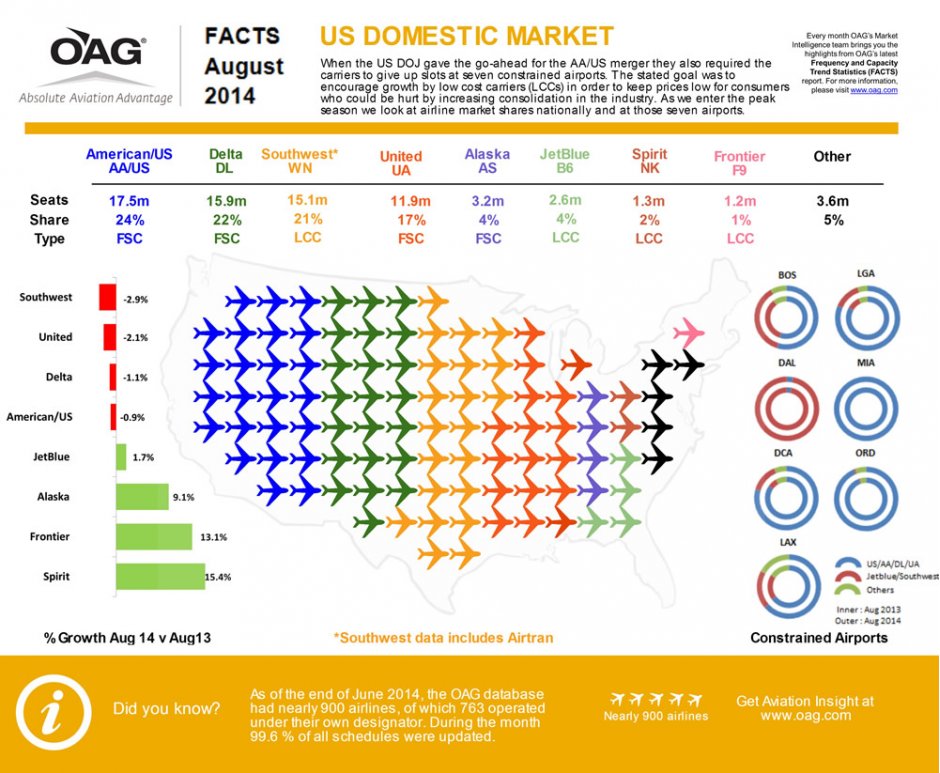