Traditional mainstream media outlets have been full of dramatic headlines over the past year regarding the expansion of Delta Air Lines at Seattle-Tacoma International Airport (Sea-Tac) and the ramifications for Seattle-based Alaska Airlines.  You can see some examples below...

Many of these articles have framed this build-up as if an all-out war for dominance of the Seattle market – one that will end with a clear winner and a clear loser. Nevertheless, Delta and Alaska—both of which are among the most profitable airlines in the industry — each continue to perform well in the Seattle market, and show few signs of slowing. So what really is going on up there in Seattle?

It’s no secret that Delta has long viewed Seattle-Tacoma International Airport as its West Coast international gateway, drawing down its Tokyo-hub and moving more Asian flights stateside. Seattle was the logical West Coast choice for a number of reasons. Seattle has the geographic advantage of having the least circuity to Asia. It lacked a single dominant international carrier as its international network was primarily comprised of foreign flag carriers. More importantly, the local market was significantly underserved, especially in the international market (as the chart below illustrates). 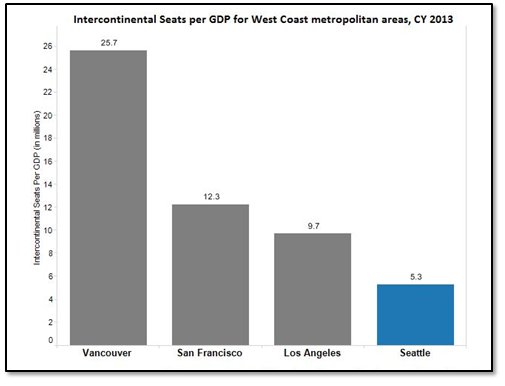 Delta’s build-up in Seattle has been dramatic. Having inherited just two intercontinental flights following its 2008 merger with Northwest Airlines (Amsterdam and Tokyo-Narita), it today offers non-stop service to nine intercontinental destinations from Seattle—more than all other carriers combined.

Lacking any significant domestic operations at Sea-Tac other than to its hubs, Delta was relying on its partner, Alaska Airlines, to supply much of the domestic feed for its growing intercontinental flights. As late as Q4 2012, it looked as though the two were possibly headed towards a closer relationship, with Alaska Air Group chief executive officer Brad Tilden joining Delta’s boss, Richard Anderson, to announce Delta’s new Seattle-Shanghai flight.

Alaska Airlines made a natural partner for Delta’s Seattle operations. In addition to maintaining its headquarters in Seattle, half of all passenger trips on Alaska originate, terminate, or connect at Sea-Tac. Alaska Air Group is notable for its fierce independence and consistently strong financials; its 16 per cent profit margin in 2013 was easily the highest of major U.S. carriers (see chart, below). 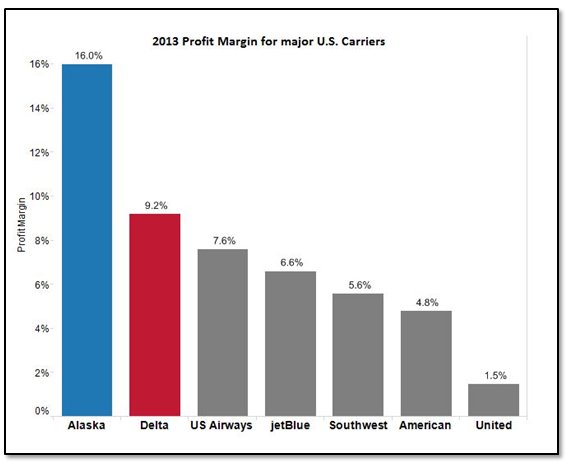 Though not a member of any airline alliance, Alaska has traditionally formed bilateral partnerships with individual airlines, including Delta Air Lines, American Airlines, and numerous foreign flag carriers from Emirates Airline to Icelandair.

With its planes full of its own profitable customers, Alaska might not have neither the need nor the desire to provide Delta with the capacity or prorates that the latter needed to feed its international flights at Sea-Tac.  In the four largest California markets in which Delta added service to compete with Alaska—Los Angeles, San Francisco, San Diego, and San Jose—Alaska regularly filled more than 88 per cent of seats. Thus, Seattle’s first new domestic services announced by Delta were all attempts to provide connecting seats to markets that Delta needed to support its international network: Las Vegas, San Francisco, and Los Angeles.

Despite the drastic jump in capacity and subsequent fare competition between Delta and Alaska, both airlines have seemingly been able to profitably fill their planes in the Seattle market. In their March 2014 earnings call, Delta’s Chief Revenue Officer and Executive VP, Glen Hauenstein, noted that all of Seattle’s domestic markets were segment profitable, and that Seattle’s margin had improved by eight margin points over 2013 despite a 22 per cent increase in revenue. Meanwhile, Alaska passenger revenue per available seat mile in the second quarter rose four per cent over the same quarter in 2013.

Throughout the third and fourth quarters of 2014, Delta has continued to add new domestic routes to Seattle. By December 2014, Delta will offer 89 peak day departures to 34 destinations—up from 36 peak day departures to 15 destinations during the same period in 2013. Seattle is increasingly serving as an important hub not only for Pacific Northwest and West Coast travellers, but for travellers from the Eastern United States as well.

The only nonstop flight from anywhere in the US to Hong Kong on a SkyTeam carrier, for example, is Delta’s Seattle flight. According to Delta president Ed Bastian, “connecting traffic now accounts for 65 per cent of our current Seattle flows, a trend we see increasing as we mature our service….” 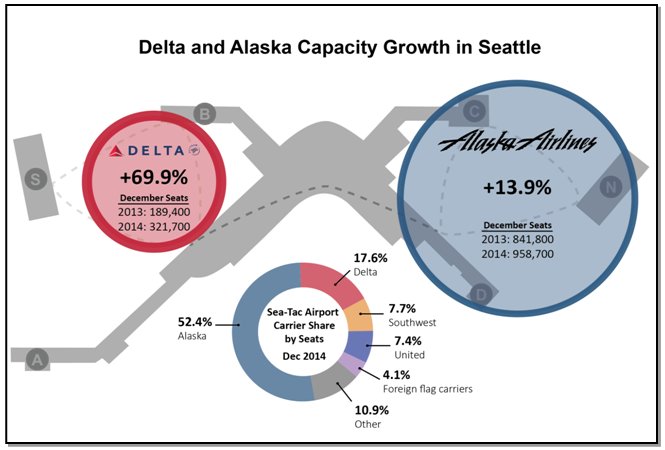 While these flights certainly will have an impact on Alaska’s profitability, most investment analysts do not believe that it will materially affect the company’s overall financial health, and continue to forecast that Alaska Air Group has a strong financial outlook for the rest of 2014 and into 2015. "While some investors and reporters continue to voice concerns over Delta's increased presence in Seattle, it appears to us that to-date impact has been minimal," wrote Imperial Capital analyst Bob McAdoo in a July 15 report. "Alaska should continue to execute near the top end of the peer group."

For the time being, at least, it seems unlikely that either Delta or Alaska is hurting significantly because of the other’s operations in Seattle. Those who see this situation as a typical battle for market share, with the winner being whomever can weather losses the longest, are apt to be in for a long wait. As Delta’s expansion continues unabated and connecting traffic flows begin to shift toward this Pacific Northwest city, it is becoming increasingly clear that the industry is witnessing something that hasn’t been seen in a long time in the airline industry — a US legacy carrier developing a new airport hub from the ground up.