Low-fare carrier easyJet announced at the UK’s leading travel exhibition, World Travel Market this week that it will launch the only direct scheduled flights between Bristol and Gibraltar Airport, further strengthening links from the South West of England to the rest of Europe. The new route will be operated up to three times weekly on a year-round basis from April 19, 2015.

This will be the second regular route for easyJet to Gibraltar, a British Overseas Territory located on the southern end of the Iberian Peninsula at the entrance of the Mediterranean. It first inaugurated flights to the territory, famous for its Rock of Gibraltar landmark, in March 2008 when it opened a link from London Gatwick. It subsequently added flights from Liverpool’s John Lennon International Airport in March 2011 but this route was closed in October 2012.

“We’re really pleased to be introducing Bristol’s only direct air link to Gibraltar Airport,” said Ali Gayward, UK commercial manager, easyJet. “With a year round service, affordable fares and flight time of just over two and a half hours, we’re confident that it will prove a popular service for both business and leisure travellers.”

Gibraltar is renowned for its rocky landscape and is ideal for those looking to escape to sunnier climates. Travellers can take advantage of Gibraltar’s breath taking views from the top of the rock, vast history and wealth of shopping, as well as giving tourists an opportunity to explore the deep caves and caverns of the country. 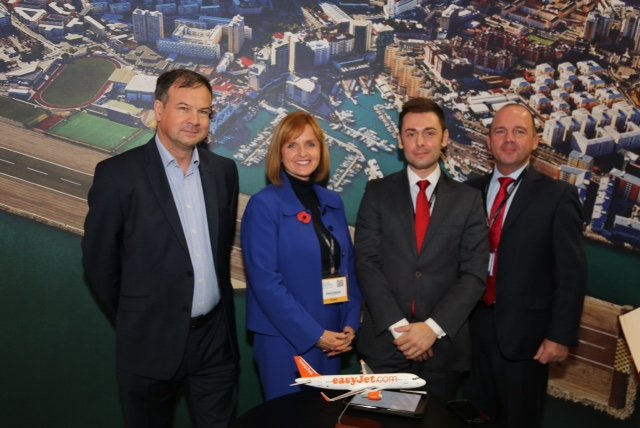 The territory actually has notable links to south west England and both share the distinction of being part of the same region in terms of representation in the European Parliament, so there are political, business and tourism connections underpinning this route. easyJet will offer a staggered schedule on the route with flights increasing during peak periods, although it confirms it will provide more than 19,000 seats available on the new service next summer (up until September 6, 2015).

“Bristol Airport is delighted to play its part in extending the air links between the UK and Gibraltar. The city of Plymouth in the South West has a strong connection to Gibraltar through its rich naval and marine industry history, and more recently the financial services sector plays an important role in both our economies. This new flight will provide easy access and improve connections for both business and leisure passengers,” added Browne.

easyJet is already the largest operator at Bristol Airport and alongside this new route to Gibraltar it will also introduce new links to Lanzarote, Catania and Porto in an expanded summer 2015 schedule and will increase its network to 50 destinations. The growth will mean an extra aircraft will be based at Bristol bringing easyJet's summer operation to 12 aircraft.  The new Lanzarote and Porto routes will be flown on a year-round basis and will operate twice and three times weekly from April 18, 2015 and April 19, 2015, respectively.  The Catania link will be flown twice weekly on a summer seasonal basis from May 14, 2015.

“As Bristol’s largest airline, and our biggest UK operation outside of London, we are pleased to continue our growth at the airport and add these new and exciting routes to our network," said Gayward.  “We’re committed to making it even more easy and affordable for travellers across the South West to fly to great destinations, whether it be for leisure or business. We’re constantly listening to the feedback from our customers and are confident that these new routes will prove popular with passengers.“

In our analysis, below, we highlight the operations of easyJet at Bristol Airport over the past ten years, a period it has held more than a 50 per cent share of the total annual seat capacity from the airport.