The Irish Government has confirmed that it will retain Public Service Obligation (PSO) services on two domestic routes to Dublin and has awarded the rights to serve the routes from Donegal and Kerry to Stobart Air from February 1, 2015, subject to a contract being signed.

Donegal and Kerry Airports are the most remote of the regional airport network from Dublin and continuation of the PSO air services will promote balanced regional development for those areas. Passengers from Donegal and Kerry will be able to conduct business in Dublin and return home on the same day, while travellers also benefit from the international connectivity available from Dublin Airport.

Regional airports are viewed as being important because of the level of international connectivity that they bring to a region for tourism and business and that connectivity is seen as being a significant contributory factor underpinning Ireland’s economic recovery and sustainable development into the future, according to Ireland’s Minister for Transport Tourism and Sport, Paschal Donohoe TD

The Irish Government established these PSO air services schemes to provide financial support to airlines to operate essential services serving these peripheral or development regions which are considered vital for their economic development and which would not otherwise be provided on a commercial basis. These originally also covered Derry, Galway, Knock and Sligo but from July 2011 was reduced to just the current two routes.

The PSOs were last awarded to Aer Arann (Kerry) and Loganair (Donegal) on three year plus contracts from November 2011 and which will now expire at the end of January 2015. Following an EU public tendering process, Minister Donohoe confirmed this week that Stobart Air has been successful in securing the tender to provide scheduled air services on the those routes, subject to a contract being put in place.

“Following an assessment of tenders by an Evaluation Panel, Stobart Air was selected to have the most economically advantageous bids for the routes,” he said.

The new combined contract will operate from February 1, 2015 until January 31, 2017 and may be extended for a further period of a maximum of one year, following the initial two year period, subject to a satisfactory review undertaken after the initial period of 18 months of operation.  Our analysis shows just under 25,000 two-way passengers flew between Donegal and Dublin and 12,000 between Kerry and Dublin during the first nine months of this year. 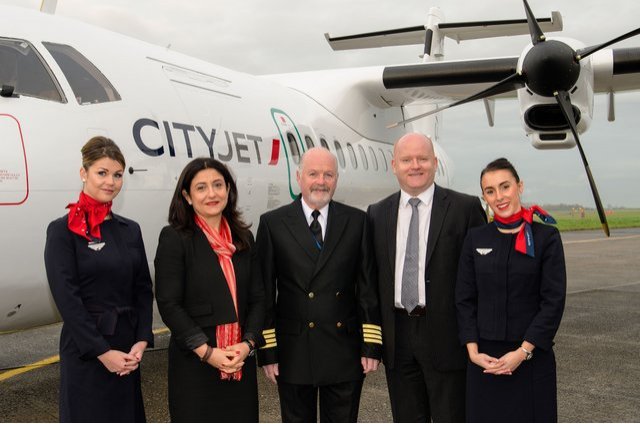 Meanwhile, Stobart Air has agreed a deal to expand its white label flying and alongside existing contracts for Aer Lingus Regional from Dublin and Flybe from London Southend, it will start flying a single aircraft for the fellow Irish operator CityJet. The ATR 42 will be based at Cardiff Airport from December 1, 2014 and will operate flights to Edinburgh and Paris Orly through the remainder of the winter 2014/2015 schedule.

CityJet said that following a market evaluation of numerous providers to operate its Cardiff routes, it chose to work with Stobart Air based on its “excellent reputation and value proposition”, according to the carrier. “CityJet shares many key values with Stobart Air, including providing customers with an exceptional travel experience, and we are looking forward to developing our offering with them into the future,” added Christine Ourmières, chief executive officer, CityJet.