Kunming is the capital of the Yunnan province with a population of more than 7.2 residents and forms the political, economic, cultural technological, educational, business, tourism information, financial centre and multi-modal transport hub for the Yunnan province.

The city is a popular tourist destination in China due to its close proximity to the Stone Forest, a UNESCO World Heritage site alongside a wealth of other tourist attractions including the West Mountain, nicknamed “the Sleeping Beauty” due to its similarity in shape to a woman lying by the side of Dianchi Lake.

Other points of interests include several renowned Buddhist temples dotted along the mountain range, the Black Dragon Pool, Pavilion of Daguan, Dianchi Lake and the Green Lake downtown to name but a few. Due to local culture and a long established history almost all of these attractions have their own folklore stories.

During WWII, the Flying Tiger Squadron, and the world famous China Southwest United University, which combined a group of leading academic institutions in China and later generated more Chinese Nobel-Prize Laureates than any others even until now, was based in Kunming.

Yunnan provides a unique tourist destination due to its rich ethnic minority cultures, with 26 nationalities out of a total of 56 in China, residing within the region.

The Yunnan province is also a unique tourist destination due to its rich ethnic minority cultures, with 26 nationalities out of a total of 56 in China, residing within the region, each with their own cultures including; costumes, traditional songs, dances and even building styles, languages and writing characters.

Due to the movement of the tectonic plates and erosion most of Yunnan, especially in the western area, you can expect mountainous and jagged landscape, creating fantastic vista points and stunning scenery. The Yangtze River, Langchang-Mekong River and the Nu-Chiang-Salween River pass through Yunnan, creating another UNESCO World Heritage Site, the Three Parallel Rivers of Yunnan. From the Snow peak of Kawagebo in Shangri-la, to Hekou near Vietnam, the elevations in Yunnan vary from 6740m to 76.4m above sea level, which determines varied local climates from tropical to sub-tropical and cool temperatures across the region.

In total there are 4 UNESCO World Heritage Sites in Yunnan, consisting of the Old Town of Lijang (listed in 1997), the Three Parallel Rivers of Yunnan (2003), Stone Forest Scenic Area (2007) and the Cultural Landscape Honghe Hani Rice Terraces (2013).

In addition to the unique scenery and 4 UNESCO World Heritage Sites Yunnan also has the largest area of primeval forest in China, preserving far more endangered species than the rest of the country. The preservation of these species is the combined efforts of the unique environment and national environmental preservation initiatives. Vaired climates, clean air and water and a bio-diversity also provide Yunnan with a wide variety of produce, a booming flora industry, and bio-medicine products for example. 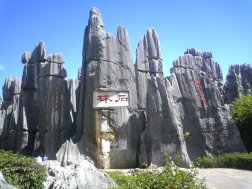 The combination of natural resources with a rich ethnic culture gifted Yunnanwith unique opportunities for the development of the tourism industry, which is one of the four pillars for the local economy. In 2011 the entire province generated CNY 130 billion income, growing by 29.1% from the previous year and representing 163 million domestic tourists alongside 7.63 million international tourists.