United Arab Emirates (UAE) low-cost carrier Air Arabia is to set up an operation in Jordan after agreeing terms to acquire a 49 per cent stake in local carrier Petra Airline. The agreement will see the carrier relaunched as Air Arabia Jordan before the end of the first quarter of this year and will see Amman’s Queen Alia International Airport established as a fifth hub for the expanding low-cost business.

Although its primary focus has been on its Sharjah-based operations, Air Arabia has already shown its ambitions to grow its business model into other countries with ventures in Egypt and Morocco. The new Air Arabia Jordan will initially operate with two Airbus A320s but the fleet is expected to grow as the business demands.

According to Air Arabia executives, the acquisition of the 49% stake in Petra Airline, which was founded by Jordan’s leading travel and transport group, RUM in 2005, will enable the budget carrier to grow into Jordan’s lucrative international market in a faster timeframe and with operational and commercial support on the ground.

“The establishment of a new hub in Jordan extends Air Arabia’s operational footprint into the heart of the Levant and brings us a step closer to achieving our stated goal of connecting the entire Arab world. This step will also provide the Jordanian economy with a reagent for growth through direct contributions to the local economy,” said Sheikh Abdullah Bin Mohammad Al Thani, chairman, Air Arabia.

You can find out some more details about the plans of the new business in this interview from Arabian radio station DubaiEye103.8 with Adel Ali, chief executive officer, Air Arabia.

Air Arabia has been serving the Jordanian market for more than ten years, but significantly expanded its operations between Sharjah and Amman last year when capacity was increased by 50.4 per cent. A further 10.9 per cent increase in capacity is already planned for 2015, based on published schedules for this route for the full year.

Under the terms of the deal, RUM Group, the existing principle shareholder of Petra Airline, will hold a dominant 51 per cent share of the new business which will strengthen Air Arabia’s position within the low-cost aviation market in the MENA and Levant region.

Petra Airline currently operates scheduled flights from Amman to Dammam and Jeddah in Saudi Arabia and Erbil in Iraq and was due to begin flights to Kuwait and Medinah, Saudi Arabia from this month, according to data from OAG Schedules Analyser. It is unclear at this time where Air Arabia Jordan will fly but the carrier will serve a range of destinations across Europe, the Middle East and North Africa and will announce its relaunch plans in the coming weeks.

Riad Khashman, chairman of RUM Group and Petra Airline, said the partnership with Air Arabia represents an important phase in the progression of Petra Airlines and will act as “the catalyst for a new era of growth” for the low cost aviation sector in Jordan and the wider Levant region.

“Alongside offering greatly increased flexibility for passengers, Air Arabia Jordan will also be an important contributor to the local economy through the creation of skilled jobs and by increasing the number of leisure and business travellers visiting Jordan,” he added. 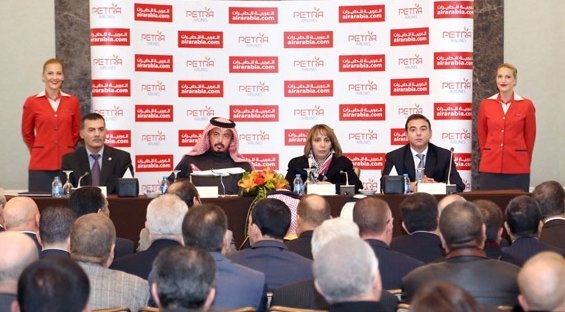 The Jordanian international market is currently dominated by the country’s flag carrier Royal Jordanian which holds a 47.7 per cent share of the available capacity in and out of the country this year, based on published schedules.

The carrier had held around a 55 per cent international capacity share until this year when a number of airlines boosted capacity into the country, including flydubai, Iraqi Airways, Kuwait Airways and the big hub carriers Emirates Airline, Etihad Airways and Qatar Airways.

Jordan has been a growing air service market these past ten years with annual capacity from the country rising from just under 2.4 million seats in 2005 to almost 4.9 million last year, an average annual growth rate of 10.4 per cent.  The chart, below, highlights the growth in the country's international air capacity over the past ten years.