A new business strategy for Italian flag carrier Alitalia was unveiled this week following a first sitting of the new executive board since Etihad Airways had its investment in the embattled European carrier approved. Alitalia will introduce new routes, new product and service standards, a new cost management strategy and new branding, as the foundations to build a premium global airline.

The new executive team and strategic investors offer an unequivocal commitment to reinvent the airline, reborn on January 1, 2015 following the completion of equity investments by Etihad Airways and Alitalia’s existing shareholders last November. As the United Arab Emirates (UAE) flag carrier’s president and chief executive officer, James Hogan, announced during a press conference to reveal the new business strategy, “I've been told not to say it but I do believe Alitalia can be the sexiest brand in Europe in aviation.”

The plan outlined this week is to put the customer at the centre of everything the airline will do and it is working to change the business to work as one united team to achieve this great common goal.

“The energies, passion and expertise I have experienced at Alitalia in recent weeks do not leave any doubt that the airline we’re unveiling today will become once again a premium Italian airline recognised worldwide,” said Luca di Montezemolo, chairman, Alitalia. “The revitalised Alitalia we envision and have started building, will be an asset to this country, and a driver to support the growth of our tourism and our business.”

The Alitalia network will be one of the main pillars of the new strategy alongside Cooperation, Fleet, Guest Service and Brand. A new three-hub strategy in Italy will be introduced with Milan Malpensa seeing an increase long-haul services, Milan Linate will grow with increased connectivity with partner airline hubs, while Rome Fiumicino will grow long-haul flying and continue to expand short and medium haul flying to maintain relevance to the Italian market. Schedules across the network will be optimised to allow better connectivity, as well as increased codesharing with existing and new partners. 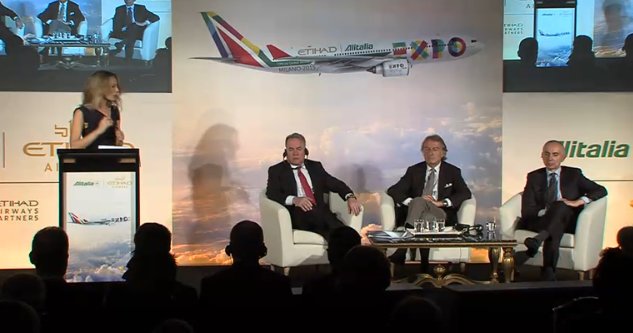 There will also be increased connectivity with Etihad Airways’ hub in Abu Dhabi and the onward flows it permits, with daily services from Venice, Milan, Bologna and Catania, as well as additional flights from Rome, all allowing onward connections to the Middle East, Africa, the Indian subcontinent, Southeast Asia, China and Australia. The Milan, Rome and Venice routes will be flown with widebodied equipment, while the new Bologna and Catania services will be operated by single-aisle equipment.

The network changes will be supported by greater fleet synergies between Alitalia, Etihad Airways and its partners and together they are exploring opportunities to improve jointly fleet efficiency. For example, Alitalia is in the process of relocating 14 Airbus A320s to airberlin, and looking into options with Etihad Airways to acquire additional wide-body aircraft for its own operation. There is also the availability to source aircraft from Etihad Airways’ existing fleet orderbook.

Etihad Airways boss, James Hogan, also now vice chairman of Alitalia, said the Italian carrier’s future will rely on major change throughout the organisation. “In a market still beset by the continuing Eurozone crisis, anything other than rapid, decisive change is simply not an option.

“We’ve invested in the new Alitalia because we believe it can flourish again. But there should be no doubts at all: we have made a commercial investment that must deliver a commercial return. The coming months and next few years will not be easy, but if everyone pulls together as one team, Alitalia can grow again. This is the right strategy, with the right management team to lead it,” he added.

Alitalia will launch a new brand and visual identity, covering aircraft, uniforms and all other customer touch-points. While the name will remain unchanged, the new branding will seek to capture and embody the essence of Italy, according to the airline’s executive team, and work to a clear deadline for the airline to deliver profitability by 2017.