When Denver International Airport (DIA) opened in February 1995 its Fentress designed peaked roof – reminiscent of the surrounding snow-capped mountains – drew admiring glances from passengers and aviation insiders alike. The aesthetic appreciation soon gave way to more practical matters but again DIA hit its mark. Airline clients talked openly of the most efficient airport in the US system. Twenty years on, DIA is intent on maintaining the feel-good factor.

Kim Day, chief executive officer, admits the iconic facility brings with it a responsibility to plan wisely and build to a quality and design that complements and enhances the existing architecture. “Denver International Airport was built with growth in mind,” she says. “The airport has 53 square miles of land, making it the second largest physical airport in the world. At full build-out, the airport can grow from its current six-runway design, serving 53 million passengers a year, to 12 runways, serving 100 million passengers a year.”

A stepping stone on the path to this ultimate build-out is the Hotel and Transit Center Program. Part of the original vision for the airport, this includes three independent, yet physically integrated, projects:

A pool and fitness centre will be situated in the “saddle” of the hotel’s 11th floor, offering views of Pikes Peak to the south and the runways to the north. The conference centre will include 12 meeting rooms (totalling approximately 10,000 square feet) a grand ballroom and two junior ballrooms (together totalling more than 16,000 square feet). Meanwhile, the downtown rail connection has been described as a “game-changer” and recaptures the convenience more associated with
Denver’s former airport, Stapleton.

As for the public plaza, that is designed to be an accessible and welcoming venue for arts and entertainment, integrating DIA into the community like never before and providing a true city experience at the airport.

DIA is taking that city experience concept seriously. The airport has more land for commercial development than any other airport in North America. “This gives us a big competitive advantage and opportunities for sustainable economic growth that most airports in the world envy,” Day says.

“In the near term, about 10% of this land contains the infrastructure needed for aviation centric, mixed-use development that might include hotels, logistic centres, training facilities, office, retail and industrial projects. We also have two additional commuter rail stations under construction that are ideal for true transit-oriented development.”

Until now, this potential development has been referred to as “Airport City Denver”. But the terminology is changing and the airport’s land development programme will in future be known as “DEN Real Estate”.

“Our location makes us appealing for companies that may want to distribute products throughout the US and the world,” says Day. “Our sheer size provides the ability for corporations to scale their operations as they grow. And our nonstop access to more than 180 locations around the world allows businesses to extend their reach around the globe.

“Together, this region can serve the needs of any business that wants to take advantage of the connectivity of metro Denver’s air and ground transportation system, highly motivated and well-educated workforce, and business-friendly environment,” adds the CEO. 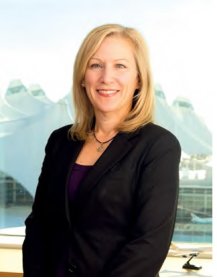 What advice would you like to give delegates at Routes Americas?

Kim Day: Come early, stay late and make the most of this wonderful region! There is so much to see and do in Denver and across Colorado, especially during the winter season. I encourage everyone to take the time to explore before or after the conference: go up to the mountains, check out the hiking and biking and don’t forget to shop. There are so very many
great restaurants that I can’t just pick one or two, but I would suggest checking out
Larimer Square, the Highlands and Cherry Creek. They are three of Denver’s unique
neighbourhoods with fun shops and excellent cuisine.

Certainly, there are few parts of the world the airport doesn’t reach. A recent addition to the long list of destinations is Panama City, served by United. Through United’s strategic partnership with Copa Airlines, the route will also act as a gateway to Central and South America, offering connections to 40 destinations in 11 countries. While too early to determine the success of the flight (it began in December 2014), it is anticipated that the new service will generate $35-$40 million in annual economic impact to the State of Colorado and support more than 400 new jobs.

Meanwhile, the Tokyo service continues to perform well, generating high load factors and year-over-year growth in average fares. “Denver-Tokyo is truly a model for how the Boeing 787 is to be successfully deployed – on long, thin routes that would be unprofitable on larger aircraft,” suggests Day.

Day’s short-term wish list for new destinations focuses heavily on Europe. Although the largest region for DIA in terms of O&D traffic, Europe remains underserved. Later this year, British Airways will switch the Denver-London Heathrow service to a Boeing 747, representing a 23% increase in capacity.

Icelandair is also due to add frequencies to Reykjavik throughout the year. “This is all good news, but we are also out talking to carriers about adding a new European gateway,” says Day. “Paris recently surpassed Frankfurt as our second-largest market in Europe (London ranks first) and we are one of the largest US markets without non-stop service to Paris. Amsterdam, Munich and Copenhagen are other large European hubs that offer potential for Denver service.”

Elsewhere, opportunities in both Canada and Mexico are being monitored closely. Despite being well-connected to both countries, Day feels there are some markets that would benefit from expanded or new air service.

In the medium term, the focus is on the Middle East and New Zealand, two long-haul markets that potentially offer sustainable, profitable service from Denver. Further out, China, Brazil and Ethiopia are all on the DIA agenda.

The airport works very closely with a key group of primary partners to market Denver, including VISIT DENVER, the Metro Denver Economic Development Corporation, the State of Colorado and various organisations associated with the ski industry.

“In today’s globally competitive environment, we have to leverage all of the resources available to effectively market Denver and Colorado to airlines,” reports Day. “More flights mean more tourists, more jobs and more economic impact to our partner organisations and Colorado’s economy. We develop both long term and annual strategic plans with our partners and focus joint resources on areas of overlap – regions where we all see growth opportunities for our various core business areas.

“In terms of campaigns for 2015, we will be celebrating the 20th anniversary of DIA on 28 February and our outreach over the next year will encompass messaging about what Denver International Airport will look like in the next 20 years.”

At the heart of DIA’s appeal is the passenger experience. Winning customers’ hearts means listening to what they want and continuing to seek innovative ways to engage with them.

Another element in enhancing the customer experience is the transformation of the airport’s shopping and dining options. In September and early October 2014, DIA hosted a Beer Garden in the centre of Jeppesen Terminal, allowing travellers and airport patrons to sample local draft beer. The plan is to repeat this annually.

A total of 21 new shopping or dining locations last year. The food options range from a table awarding-winning restaurant, Root Down, to Steve’s Snappin’ Dogs, a family-owned local favourite offering a wide variety of hotdogs and burgers. Other new venues include Elway’s, a fine dining establishment, Cru food and wine bar and a health food option in Etai’s Bakery Café.

“Our food offerings have not only got better, they have got better for you,” Day enthuses. “What used to be a smattering of fast food options has transformed into a wide range of dining destinations that offer new local tastes alongside established national brands. We earned the number one ranking for healthiest airport food in the country from the Physician’s Committee for Responsible Medicine.”

A number of factors has helped Day manage the plethora of developments at DIA. Arguably most important is the airport’s strong financial position. “Our financial strength has benefitted from extensive planning and the strong passenger growth we have seen over the past four years, which has helped us to outperform the objectives we established in our 10-year financial strategy,” Day informs.

“Our long-term plan focuses on balancing three primary metrics [cost per enplaned passenger, cash on hand and debt coverage while funding ongoing maintenance and facility upgrades. We work hard to maintain competitive operating costs for our airline partners. Our plan also supports the airport’s need to adapt to changing markets and economic climates. We established targets against which we can manage and measure performance.”

Day also places emphasis on the airport leadership team, empowering and encouraging them to outperform their own vision of their abilities. According to Day, a key part of her job is to keep them focused on the overall strategic vision of the city and the airport, while providing them with the resources to accomplish their individual strategic and tactical plans.

“I try not to micromanage, while keeping a pulse on the details of individual initiatives,” she says. “That is a difficult rope to walk, but I think it is vital. I also think personal touches like handwritten notes, face-to-face conversations and birthday cards sent to all employees’ homes help to create a culture of caring and collaboration, and makes individuals at all levels of the organisation feel a part of something bigger, inspiring them to contribute.”

Externally, Day notes the imperative to build a relationship of transparency and trust with the Mayor (Day’s boss), the City Council, other elected officials and the overall business community. “As a public agency, it is important to maintain the public trust, by making fair and ethical decisions in all that we do,” she concludes.

Environmental initiatives at the airport

Denver International Airport was the first commercial airport in the US to achieve ICAO certification for an overall property Environmental Management System. Some of DIA’s environmental initiatives are clearly visible, such as the fourth solar power array added in June 2014. The photovoltaic farms have the capacity to generate 10 megawatts, or 16 million kilowatt-hours of electricity.

That’s enough electricity to power about 2,600 typical Denver-area homes each year or about 6% of the airport’s annual demand. Less visible is the recently-implemented Aerobahn De-icing Manager, which integrates airport surface surveillance and flight data to provide real-time situational awareness of de-icing pad activity. Aerobahn use during a typical snow event will reduce airline delays by 2.6 minutes per aircraft, saving the airlines $5.8 million per winter season, while also reducing fuel use and emissions.

DIA also has one of the most comprehensive de-icing fluid collection and recycling systems in the world, boasting an average collection rate of 69% of all fluid applied to aircraft in a typical winter season. Environmental gains will also be had from Denver’s work with the Federal Aviation Administration on its NextGen programme. NextGen procedures have transformed Denver’s skies and will enable DIA to meet increased demand while minimising aviation’s environmental impacts. United Airlines, which has a hub in Denver, estimates uninterrupted idle descent from cruise to final approach results in 200-800lbs of fuel savings per flight, depending on the size of the aircraft.