Senior executives from US majors American Airlines, Delta Air Lines and United Airlines have this past week met with two senior members of President Obama’s Cabinet and other senior administration officials to discuss a potential freeze on the number of flights that the Gulf carriers may operate into the USA, former US deputy assistant secretary of state, John Byerly, revealed during the Routes Americas Strategy Summit in Denver.

Now an independent industry consultant, Byerly has been a huge advocate for the benefits of relaxed air service agreements and is recognised within the industry for his work negotiating early open skies agreements between the USA and Canada in 1995 and the USA and countries in Central America in the late 1990s.

“It’s disturbing — at least it’s disturbing to me — to learn that a troika of the CEOs of Delta, United, and American met on Wednesday and Thursday of this week with two members of President Obama’s Cabinet and with other senior Administration officials for a reported further salvo in their war against Open Skies,” he said in his address to the audience of airline, airport officials at the network planning event.

What could any changes to US Open Skies agreements mean to airports across the country?  Our content partner, Flightglobal spoke to delegates at this year's Routes Americas to get some reaction for the final issue of its Airline Business Daily.  Find out more: ANALYSIS: US Open Skies Debate Divides Industry

According to Byerly, citing industry sources, the airlines are calling on the Administration to freeze the number of flights that the Gulf carriers may operate, to potentially renegotiate the Open Skies agreements with Qatar and the United Arab Emirates (UAE) to impose severe capacity restrictions, and if renegotiation doesn’t succeed, to terminate the agreements and allow growth in the future only if US carriers wish to expand service into those Gulf markets.

“It’s disturbing — at least it’s disturbing to me — to learn that a troika of the CEOs of Delta, United, and American met on Wednesday and Thursday of this week with two members of President Obama’s Cabinet and with other senior Administration officials for a reported further salvo in their war against Open Skies.”

“What is all too apparent is that these opponents of Open Skies want to maintain full opportunities for US airlines where it is to their advantage but to close the door in markets where competitors pose a challenge.  Having grown and prospered using Open Skies rights, they now want to pull up the ladder and deny others the same opportunity,” said Byerly.

Some supporters of competitive aviation markets and Open Skies have begun to question whether the US has actually made a mistake in allowing extensive airline consolidation and whether it is correct to continue grants of antitrust immunity for these airlines to set fares and capacity jointly with their foreign airline partners in the SkyTeam, Star, and oneworld alliances.

“I’m not prepared quite yet to endorse that view,” said Byerly.  “But it is deeply worrisome when the US mega-carriers and their alliance partners shift their focus from competing in the marketplace to persuading our government, and governments abroad, to limit market access by carriers that aren’t part of their chummy club and don’t follow their rules of so-called capacity discipline.”

The keynote address at this year's Routes Americas Strategy Summit in Denver by John Byerly, a former Deputy Assistant Secretary for Transportation Affairs at the US State Department has certainly ignited an interesting debate on the relationship between US and Gulf carriers, especially given his current role as a consultant, with clients including Emirates Airline and Norwegian. But, who is John Byerly?  Find out more: Who is John Byerly?

“And I object when they band together to demand that the United States turn its back on Open Skies agreements where, through their own lack of foresight and intiative, they lag behind in the market,” he added.

Byerly described these anti-Open Skies efforts as “anti-consumer, anti-growth, and anti-competitive,” that may well bolster the troika’s profits and pump up the salaries of their executives and pilots, but cannot be the goal of aviation policy. 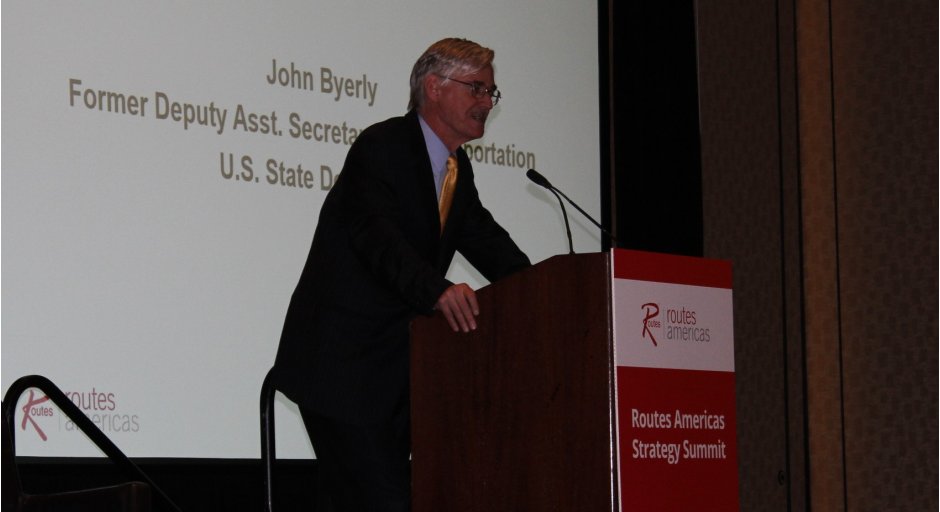 “Having secured the benefits of Open Skies for themselves, some of the largest US airlines, together with the Air Line Pilots Association, have suggested over the past year that it’s time to adopt a policy of ‘fair skies’, not Open Skies,” said Byerly, describing this an increasingly threatening “war tocsin against Open Skies”.

POLL: Do you believe the current Open Skies agreement between the US and Qatar and UAE is unbalanced in favour of the Gulf operators?

Alongside the Gulf carriers, they have aimed their attacks at Norwegian Air International, which is seeking approval from Department of Transportation (DOT) to exercise the rights granted to every licensed European Union carrier to operate low-cost, long-haul transatlantic services.

“I don’t object to airline profitability at all.  But I do object when an unholy alliance of powerful carriers files joint pleadings before the DOT to prevent Norwegian from operating to the United States,” said Byerly.

“So far, they and their powerful, politically connected labour unions have succeeded in delaying a long-overdue DOT decision.  Indeed, the European Union has formally objected to this unprecedented delay as a breach of the US-EU Open Skies agreement,” he added.

Byerly heaps praise on the Big Gulf hub carriers and Norwegian that have established operations based on sound competitive principles.  He said such carriers represent innovation, a willingness to contest markets, and a commitment to finding success through competition and not by persuading regulators to throw up the walls of protectionism.

“Having secured the benefits of Open Skies for themselves, some of the largest US airlines, together with the Air Line Pilots Association, have suggested over the past year that it’s time to adopt a policy of ‘fair skies’, not Open Skies.”

Having played a major role in breaking down some of the barriers that have significantly boosted connectivity across the Americas, Byerly warned that a return to a restricted operational environment was not something that should ever be considered.

He claimed this would set a bad precedent and create an “infection” that could see a return to a structure of regulation when Governments would spend time fighting to add just single additional frequencies in markets crying out for more capacity.

“I’m a firm believer that Open Skies and the vigorous competition it fosters are the best way to secure for American consumers, airports, and communities the benefits of more international routes, more tourists, lower prices, and enhanced quality of service,” said Byerly.

“I am convinced that, by following the compass of good public policy and simple common sense, we can fly through this anti-competitive turbulence with our Open Skies principles intact,” he concluded.

You can watch our EXCLUSIVE INTERVIEW with John Byerly following his address, below.