History was made during this year’s Super Bowl XLIX when Ecuador became the first foreign government to advertise during the American Football sporting finale. The showpiece event in the US calendar is watched by over 110 million people and a marketing investment of as much as $4.5 million for a 30-second commercial is believed to be money well spent in spreading your brand and business messages. As one Routes Americas delegate told Routesonline: “The Super Bowl is as much about the excitement of the adverts as the game itself.”

For Ecuador it was an estimated $3.8 milllion investment for it to spread its latest tourism campaign to the massive investment. Its "All You Need Is Ecuador," or "Todo lo que necesitas es Ecuador”, campaign uses lyrics from The Beatles classic song "All You Need Is Love" showcasing the many wonders of the South American country.

The recognisable tune hopes to entice people to this equatorial nation of some 15 million residents from the US through images that highlight the country’s Pacific Ocean coast, its Andes Mountains, the Amazon rainforest and the iconic Galapagos Islands. The US is already the second-largest source of tourism for Ecuador after Colombia and last year over 250,000 Americans travelled to the country.

In the run up to the airing of the advert Ecuadorian Minister of Tourism Sandra Naranjo explained one of the reasons for the significant investment. "In 2014, 112 million people watched [the Super Bowl]. That's roughly the population of Colombia, Ecuador, Peru and Bolivia combined," she said.

Ecuador certainly has a lot to offer and has a growing inbound appeal as the new Quito International Airport, the largest gateway into the country, makes the destination more accessible to international arrivals without the operational restrictions that had affected its downtown predecessor. 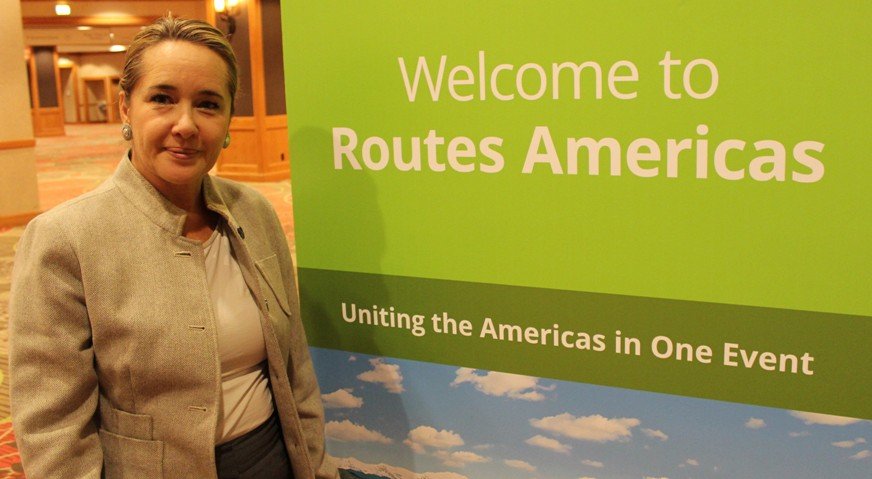 “Improving the infrastructure to handle air traffic growth into the country and Quito in particular has been vital,” Luz Elena Coloma Escobar, general manager, Quito Tourism Board told Routesonline during an exclusive interview at Routes Americas. This is of particular importance when you consider Quito is located at 2,850m above sea level, almost double the height of this year’s host city Denver, the Mile High City.

“This event and World Routes are important platforms for us. It was at Routes where we established first contact with Aeroméxico and VivaColombia, airlines that began operations in Quito in December 2013 and December 2014 respectively,” she added.

Ecuador is perhaps one of the most mega-diverse countries per square kilometre on the planet. In relation to its surface areas, Ecuador holds the greatest amount of species of plants and animals on Earth. Situated on the equator, Ecuador’s year-round spring climate bestows an incredible variety of flora and fauna on the country. In its 24 provinces, a visitor can find 1,800 species of orchids, 1,640 species of birds, 4,500 species of butterflies, 345 species of reptiles, 358 species of amphibians and 258 species of mammals.

The country’s key tourism products are eco-tourism, adventure tourism, and cultural tourism, but in regard city life, Quito, is filled with bright blue skies and art, and bears one of the largest best preserved colonial centres of Latin America fused with a modern and contemporary city.

Alongside the wider natural wonders of Ecuador, Quito is marketing itself as the centre of the world as it seeks to attract a wider mix of business and leisure arrivals to the city through growing MICE initiatives. “We see meetings and conferences as a growing sector. We are looking to host a number of high profile events in the future that will place Quito on the map,” said Escobar.

At its elevation of 2,850m Quito is the closest capital city to the sun, according to its marketing literature and the only big city where you can simultaneously have one foot in the Northern hemisphere and the other in the South, while still acting as the perfect doorway to Ecuador.

The US market remains the main target for arrivals, but the recent new links to Mexico and Colombia have seen these countries grow in importance. In Europe, Germany and the United Kingdom are the main targets, as well as growing links in Spain where there is a strong Ecuadorian diaspora.

Iberia and LAN Airlines currently link both Quito and Guayaquil to the Spanish capital Madrid, while KLM offers flights to both Ecuadorian cities from Amsterdam, a market among the first destinations to be served by its new Boeing 787-9 Dreamliners from December 2015.