Spicejet is being rescued from the brink of bankruptcy while Indigo goes from strength to strength. Air India and Jet Airways have failed to develop their networks substantially over the last five years, but Jet Airways is in now the safe hands of Etihad and Air India has successfully joined Star Alliance and is benefiting from the introduction of the Boeing 787. Meanwhile, new carriers, Air Asia India, Vistara and Air Costa, signal a new breed of airline in the India domestic market.

The election of Prime Minster, Narendra Modi, in May 2014 brought optimism for a change in fortunes of the Indian economy, but the recovery has been sluggish and his party has recently lost the Delhi State elections. Despite the faltering economy in 2014 with GDP growth static at around 5.8%, most economists are predicting a more promising 2015.

The opportunity is enormous. With a population of 1.2 billion, India is the second most populous country in the world, but is the eighth largest aviation market by number of seats. A recent report by the Federation of Indian Chambers of Commerce (FICCI) and KPMG estimated that 99.5% the population has not flown, but the growing middle class has the potential to change this percentage dramatically.

Airline seat capacity growth for 2015 looks set to be around 5.7%, taking a representative week in June. This is above a CAGR of 3.3% for the previous four years. There is one carrier that has driven the majority of the seat growth in India and that is Indigo, which has generated five times more weekly seats in the past four years compared with the next largest carrier, Jet Airways.

Indigo has focused its network development on domestic city pairs, with 105% growth in weekly seats in 2015 versus 2011 and has over one-third of the domestic market in India. The carrier has also been cautiously developing its international network over the last four years, with services to Nepal, Oman, Singapore, Thailand and the UAE.

Excluding the domestic market, India is dominated by capacity into the Middle East and in particular the UAE, which now accounts for 30% of all international seats. The next four largest markets in terms of seats are Singapore, Saudi Arabia, Thailand and the UK. 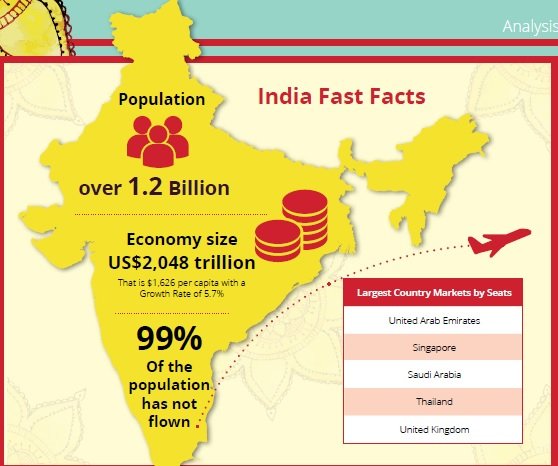 Indigo has become the market leader in India and with a fleet of 66 aircraft and an order book of 180 A320s, its position will be hard to dislodge. There is speculation that its success has caught the eye of Qatar Airways, so the carrier may be brought into the oneworld alliance, unless another group snaps it up.

The fortunes of the two full service network carriers, Jet Airways and Air India, appear to be turning around, perhaps more quickly at the latter. Jet Airways, benefitting from investment from Etihad (24%) appears to have safeguarded its future. The carrier has seen its LCC brand, Jetlite, brought into the main business. Its long-haul fleet has been reduced and an increased focus has been placed on serving the Etihad hub at Abu Dhabi.

Meanwhile, Air India joined Star Alliance on 11 July, 2014, which will bring revenue benefits and improved operational standards to the carrier. It has recently been mandated to reduce costs 10% for 2015/6, a task that should be achievable given the reduction in the fuel price and the introduction of Boeing 787s, replacing the 747 and 777 fleet.

The second and third largest LCC carriers in India, GoAir and SpiceJet, appear to be having mixed fortunes with GoAir, a privately run airline, operating 20 A320s steadily developing its network from its main bases in Mumbai and Delhi. It is now able to operate international services.

SpiceJet, on the other hand, has debts of INR10 billion and as a consequence the founder, Ajay Singh, has taken on the ownership through additional investors. Spicejet operates 18 Boeing 737s and 15 Q400s, and, like Indigo, over 95% of its network is domestic flying, with a few international services to, Afghanistan, Maldives, Nepal, Oman, Sri Lanka,

Thailand, and the UAE

Time will tell if the investment secured is enough to save the brand. Given the carrier leases its aircraft, there are few assets to be salvaged if the new investment doesn’t succeed. In the last 18 months, India has seen three new carriers enter the market, each with a slightly different business plan. Air Asia India, 49% owned by Air Asia with the rest owned by the Tata Group, operates three A320s from a base in Bengaluru. The carrier will be adopting the Air Asia strategy of low cost services focusing on secondary cities.

Air Costa, based at Vijawada, operates four Embraer 190s and 195s and has a further 50 on order. The regional low-cost carrier is targeting the slightly thinner routes between tier II and tier III cities, where a premium can be achieved. The last new entrant is Vistara, 49% owned by Singapore Airlines. Based in Delhi, the carrier operstes five A320s and has a lease signed for another 20, with the first route being Delhi to Mumbai. Vistara, like Air Asia India, has the backing of the Tata Group and is a full service carrier, bringing a Premium Economy product to India. The business plan is similar to JetBlue or Virgin America in the US.

Certainly, Singapore Airlines’ involvement brings quality, but is the market mature enough for this level of market segmentation at this point in time? In addition to the above new carriers, there is a further queue of new entrants, which are currently at the licencing stage. These include Air One, Air Pegasus and ABC Airways.

Despite the huge potential in the Indian market, these new carriers will be entering a domestic market that suffers from low yield and high taxation on fuel – up to 60% higher than other countries. These are not the foundations for success. Not all the carriers will survive and no doubt there will be some consolidation, similar to Air Sahara and Indian Airlines being absorbed into Air India. It will be interesting to see which carriers – new or old – will help India’s aviation industry to fulfil its potential.