The UK’s Birmingham Airport and China’s Guangzhou Baiyun International Airport have signed a Memorandum of Understanding (MoU) to formalise a working relationship and commit to developing links between the two cities. At a ceremony held at the Routes Asia conference in Kunming, China today (Monday 16th March), the MoU was signed by Birmingham Airport’s aviation development director William Pearson and Jammes Shen, director of aviation marketing at Guangzhou Baiyun Airport.

Speaking to Routesonline at the official ceremony, Birmingham Airport’s aviation development director William Pearson, said: “We are delighted to establish this new partnership with Guangzhou Baiyun Airport, which we hope will pave the way for potential flights between the two cities in the future.”

“This signing reflects our intent to work together, forging an effective working relationship and to develop mutually advantageous opportunities that will benefit both airports, as well as the cities of Birmingham and Guangzhou,” he added. 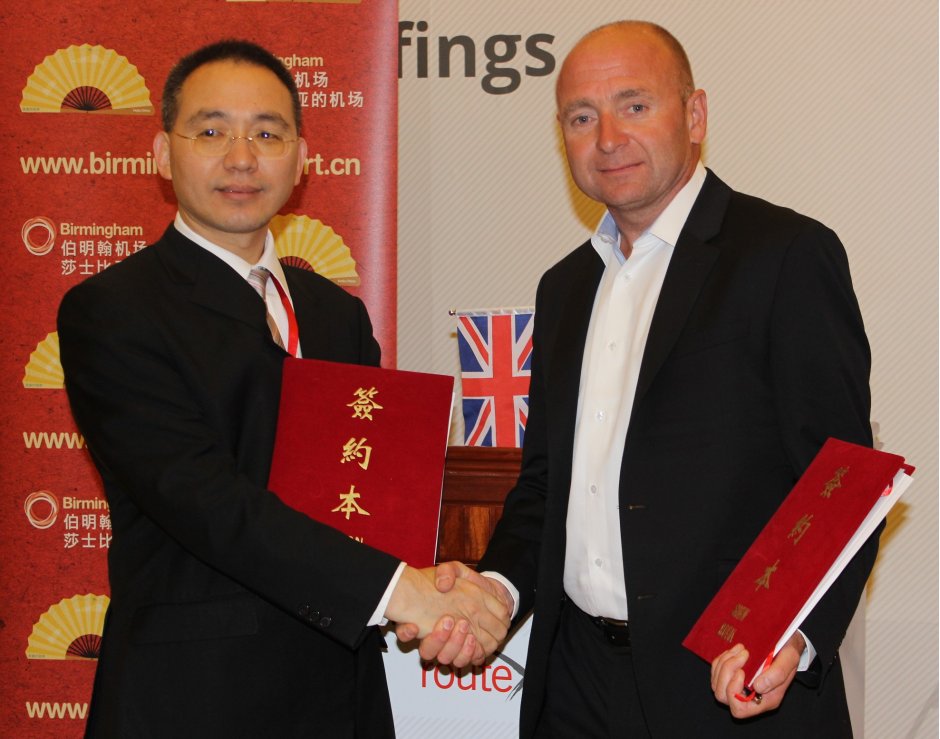 Mr Jammes Shen, director of aviation marketing at Guangzhou Baiyun Airport, added: “Baiyun Airport and Birmingham Airport have signed a strategic co-operation framework agreement which will enhance the co-operation in areas such as hub construction, airport operation, joint marketing, airport service enhancement and airport resource sharing. By signing this agreement, Baiyun and Birmingham Airport can also contribute to the rapid development of the aviation market of Guangzhou and Birmingham.”

Potential future non-stop flights to Guangzhou from Birmingham will be possible thanks to an investment by Birmingham Airport to extend its runway to enable longer haul flights. The development was opened in April 2014 by the Prime Minister and was inaugurated by the first Birmingham-Beijing charter service in July 2014. The third runway of Baiyun Airport was put into use at the beginning of February and such a development will become the basis for further cooperation between both airports.