Central and Eastern European low-cost airline specialist, Wizz Air, will slightly modify its existing model by introducing a second aircraft type to its fleet later this year. While maintaining the one fleet family concept, the budget carrier has switched 26 of its outstanding orders for the A320, for the larger A321 variant and will place the first aircraft into service in the last quarter of this year.

We first revealed about Wizz Air’s interest in A321 in spring 2013 when the carrier’s chief executive officer, József Váradi revealed at Routes Europe in Budapest, Hungary, that the carrier was considering the type. In an interview with Routesonline at the forum he said: “We think the A320 could be coupled with the A321. The A321 is a good aircraft. It gives more efficiency economically to the business and doesn’t bring complexity to the operating model.” The deal to switch the 26 outstanding orders to the larger variant was confirmed later the same year.

The A321 is the largest member of the A320 aircraft family, and has a longer range compared to the A320. While it has the same wingspan and operational systems to the A320, it is seven metres longer and can accommodate 40 additional passenger seats per aircraft. According to Wizz Air the larger capacity will enable the carrier to “accommodate its ongoing route network expansion” and maintain “low ticket prices”.

As part of its ‘Go East’ strategy Wizz Air has recently expanded its network into countries such as Israel, Azerbaijan, UAE and Russia and the larger A321s are expected to fly on some of these new routes, while also enabling capacity to be increased on some trunk routes within Europe.

However, in the latest update from OAG Schedules Analyser it appears that the aircraft will initially be deployed on Wizz Air’s core network within Europe serving some of its busiest routes from its main base at Budapest Airport in Hungary.

According to the data from the intelligence provider Wizz Air’s latest uploaded schedules show the Airbus A321 entering scheduled service on November 20, 2015 operating three times daily on the Budapest – London Luton route. As an additional aircraft arrives the A321 will also be utilised on daily services from Budapest to Brussels Charleroi, Eindhoven and Istanbul Sabiha Gokcen from December 16, 2015.

Here's the proposed A321 introductory schedule as extracted from OAG Schedules Analyser on the morning of April 24, 2015... 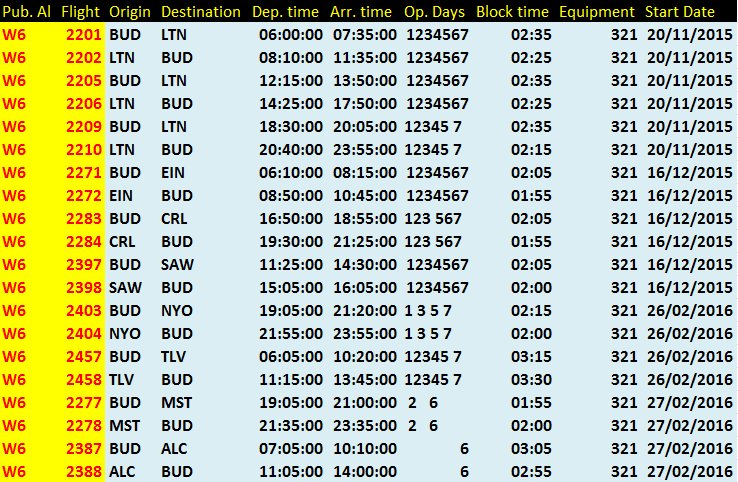