The hosting of Routes Europe in the Northern Ireland capital, Belfast, in April 2017 will bring significant benefits to the city, country and entire Ireland, said Minister Arlene Foster, head of the Department of Enterprise, Trade and Investment in the Northern Ireland Executive at the formal announcement of the 2017 edition of the forum.

Fresh from this year’s tenth edition in Aberdeen, Scotland, earlier this month, the formal announcement of the 2017 host was made at a special event at the Invest NI headquarters in downtown Belfast on the afternoon of April 30, 2015. Next year’s Routes Europe will take place in the Polish city of Kraków, hosted by Kraków Airport and its partners, the Małopolska Kraków Region and the City of Kraków.

ROUTES EUROPE 2017 will take place in Belfast, Northern Ireland, hosted by a partnership led by Visit Belfast and Invest NI, and supported by Tourism NI, Tourism Ireland, Belfast International Airport, George Best Belfast City Airport and Belfast City Council. It will be held in the in the newly expanded Belfast Waterfront Conference and Exhibition Centre between April 23-25, 2017.

The main conference will take place from Sunday 23rd April to Tuesday 25th April, 2017 in the newly expanded Belfast Waterfront Conference and Exhibition Centre due to open in spring 2016.

“Being chosen as a Routes host is both a great honour and a substantial commitment. It provides us with a rare opportunity to bring influential decision makers into the region, showcase Northern Ireland, and build and develop relationships for future partnerships,” said Minister Foster.

“It will also deliver a substantial economic impact both immediately and longer term. The conference will attract more than 1,200 European and international delegates, including air service decision makers from over 130 airlines. They will stay in Belfast for at least three nights – bringing an economic benefit to the city worth over £1.3 million,” she added.

In addition to the main conference there will be a programme of supporting events across the city, which the Minister hopes will leave a lasting legacy of Northern Ireland in the minds of visiting delegates.

“The intangible benefits are just as important; Routes Europe is a chance to showcase all that is on offer here for airlines, tourists, businesses and inward investors, and an opportunity to positively influence perceptions about Northern Ireland and position it as a dynamic, outward-looking country,” she said.

“It will also generate extensive, positive, international PR coverage for Belfast and Northern Ireland, which will enhance our profile as a tourism destination and as a location for hosting large-scale international events,” she added.

However, beyond that, and most significantly, Routes Europe has the ability to accelerate European route development for Belfast and Northern Ireland.

“I am committed to improving Northern Ireland’s air connectivity, both long and short haul, as part of the Northern Ireland Economic Strategy. Routes Europe offers us a unique forum through which we can further that aim. As well as enhancing our air connectivity, new routes will open up opportunities for the supply chain in our aerospace sector, which is an important and growing sector that is helping to drive economic growth,” said Minister Foster. 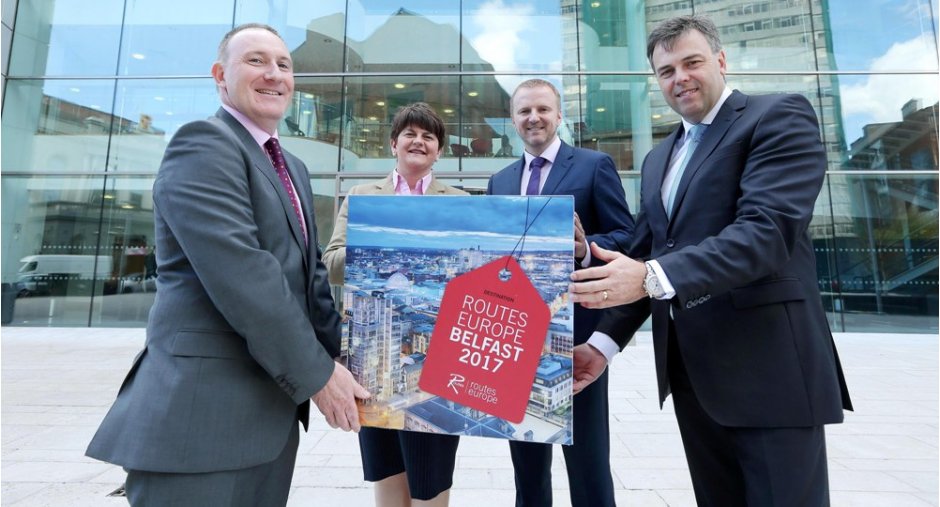 The winning bid was prepared by a partnership led by Visit Belfast and Invest NI, and supported by Tourism NI, Tourism Ireland, Belfast International Airport, George Best Belfast City Airport and Belfast City Council and is an excellent example of the power of organisations working together in partnership. This collaboration has led to a number of wins in recent years, from hosting world leaders at the G8 summit to the World Police and Fire Games and Giro D’Italia.

Northern Ireland has proved that it can deliver when it comes to world-class events and I’m looking forward to us demonstrating that in 2017 when we welcome Routes Europe,” she added.

Her views were supported by Gerry Lennon, chief executive officer, Visit Belfast, who told Routesonline that the city was "proud to be hosting Routes Europe 2017" and was looking forward "with huge excitement to warmly welcoming every delegate to experience a thriving and capable city brimming with enthusiasm and ready to deliver".

"A city firmly on the rise which is investing in its future, Belfast has all the credentials, experience and capacity to host major world class events and when combined with the strength of our hospitality offer, the warmth and friendliness of our people, our unique heritage and world-class attractions, we guarantee that all our guests will be keen to return,” he added.

During the Routes Europe 2017 hosting announcement, Routesonline also spoke to Alastair Hamilton, chief executive officer, Invest Northern Ireland on the economic benefits of the event to the country.  You can watch the interview, below...