European low-cost carrier, Vueling, will slightly modify its existing model by introducing a second aircraft type to its fleet this summer. While maintaining the one fleet family concept, the budget carrier will complement its current A320 fleet and small number of leased A319s with ten larger A321 variants and will place the first aircraft into service at the start of July 2015.

The A321 is the largest member of the A320 aircraft family, and has a longer range compared to the A320. While it has the same wingspan and operational systems to the A320, it is seven metres longer and can accommodate 40 additional passenger seats per aircraft. According to Vueling the larger capacity will enable the carrier to boost capacity in key markets.

Vueling, a subsidiary of British Airways and Iberia parent company IAG, could also use the aircraft to expand its offering from its main base at Barcelona’s El Prat Airport, as well as its secondary bases across Continental Europe. However, in the latest update from OAG Schedules Analyser it appears that the aircraft will initially be deployed on Vueling’s core network within Europe serving some of its busiest routes from its main base in Spain’s second city.

According to the data from the intelligence provider Vueling’s latest uploaded schedules show the Airbus A321 entering scheduled service on July 3, 2015 operating a morning return rotation on the Barcelona – Nantes route. The same day the aircraft will operate from Barcelona to Brussels and back and then in the evening to Granada and back before operating an overnight flight to Moscow.

After returning to Barcelona on the morning of July 4, 2015, the aircraft will then operate return flights to Copenhagen, Madrid that day and to Stockholm and London on July 5, 2015. Over the subsequent week the larger capacity airliner will replace smaller A320s on flights from Barcelona to Bilbao, Lisbon, Milan, Naples, Nice, Vienna and Zurich.

The current Vueling A321 flight schedules suggest that a second aircraft will enter service from July 14, 2015 and as additional aircraft arrive the type will be deployed on more routes across Continental Europe into the United Kingdom and Scandinavia and to destinations across the Mediterranean and into Russia and North Africa.

Here's the proposed A321 introductory schedule as extracted from OAG Schedules Analyser on the morning of May 11, 2015... 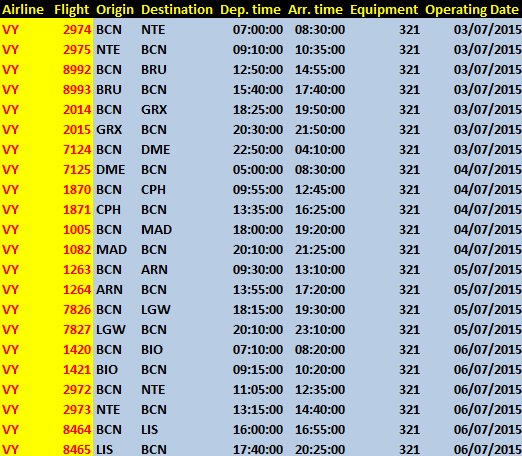