Iranian carrier Mahan Air has revealed it has introduced nine second-hand Airbus aircraft into its fleet during the first two weeks of this month to continue its development and replace some of its older airliners. The aircraft were acquired for an undisclosed amount from unidentified sellers, although ownership data suggests these were sourced via Iraqi company Al-Naser Airlines.

The carrier describes the fleet additions as an important boost for the country’s civilian aviation industry, which has struggled for many years because of ageing fleets and American-imposed restrictions on access to replacement aircraft, parts, technology and service.

Western aerospace companies are prohibited from dealing with Iran by sweeping sanctions linked to the country’s nuclear programme and to its sponsorship of terrorist groups. Under US law hefty financial penalties can also be applied to non-western entities which do business with Tehran, a restriction that has made it difficult for the country’s airlines to source supplies.

Mahan Air was placed on a sanctions list in October 2011 by the US Treasury Department over what it called the airline’s support for activities of Iran’s Revolutionary Guards Quds Force and Hezbollah militants – a claim vehemently rejected by the airline.

Mahan Air has previously managed to bypass sanction rules by acquiring Airbus equipment via intermediaries. It confirms these new aircraft, which comprise a single A321, seven A340-600s and a single A340-300, will enable it to strengthen its position in the Iranian market. All the widebodies formerly saw operation on the long-haul network of Virgin Atlantic from the UK with many initially being sold to ACMI provider HiFly Malta before ending up in Iraq.

“With the ever- growing number of domestic and international routes, and providing more proper services to our passengers, Mahan added new planes to its air fleet that is a part of Mahan Air improvement plans that has been achieved,” it said.

It appears that all nine aircraft were ferried to three airports in Iran on May 8, 2015. All were previously registered to Al-Naser Airlines, the second flag carrier of Iraq and first private airline in the country.

The arrival of the aircraft in Iran has sparked investigations from the world’s media into the brokering of the deal to import the aircraft into the country. The Financial Times suggests Mahan Air is suspected of spending more than a year brokering a complex series of arrangements with apparently unwitting companies across Europe using Iraq’s Al-Naser Airlines as a front, citing western security officials.

It describes the sanctions-busting operation to acquire the nine new aircraft as “the most ambitious scheme by Iran’s hard-hit aviation sector yet uncovered” and is believed to have involved “a sprawling network of leasing arrangements and contracts across Europe”.

It comes at a particularly sensitive time for Iran’s relationship with the west. While landmark nuclear negotiations are poised to open up the Islamic Republic’s economy to the world in exchange for curbs on its atomic ambitions, there are also concerns over Tehran’s role in bloody proxy conflicts with its regional rivals.

Mahan Air will now be one of the largest remaining operators of the four-engined Airbus A340, a type that is being retired from the fleet of many airlines and replaced by more efficient twin-engined airliners. In a blog post this past week aviation intelligence provider OAG has highlighted the decline in A340 flights since the manufacturer ended production of the type at the end of 2011.

Three and a half years down the line and unsurprisingly, there are fewer A340s in the air. According to OAG schedules data this year there will be 119,000 scheduled passenger flights using this aircraft type, down from a peak of 206,000 in 2008. 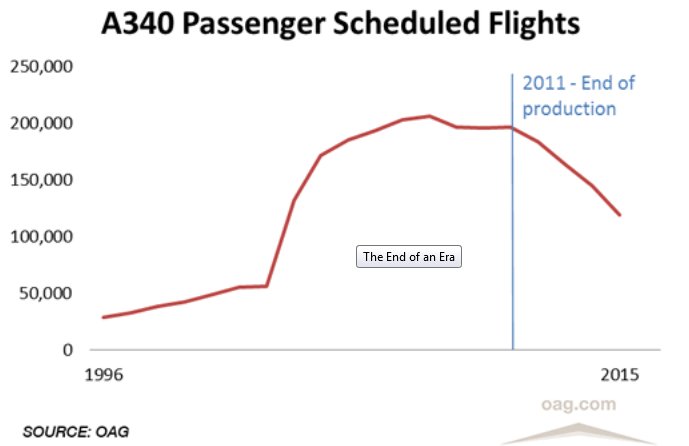