Queen Alia International Airport (QAIA) is fast gaining a reputation for delivering quality customer service to match the best in the business. QAIA’s customer-focused philosophy is such that it has been recognised by passengers, rating the facility the Best in the Middle East and Best Improvement in the Middle East in ACI’s 2014 Airport Service Quality (ASQ) customer satisfaction survey. 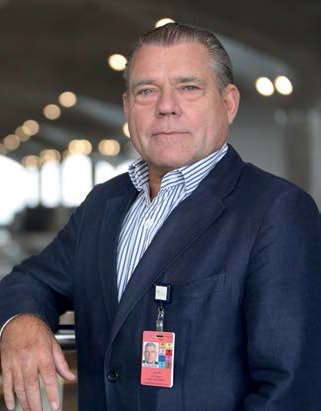 Queen Alia International Airport (QAIA) is fast gaining a reputation for delivering quality customer service to match the best in the business. QAIA’s customer-focused philosophy is such that it has been recognised by passengers, rating the facility the Best in the Middle East and Best Improvement in the Middle East in ACI’s 2014 Airport Service Quality (ASQ) customer satisfaction survey.

“Our focus is on the provision of high quality facilities and services and this is reflected in our mission statement, which is for Queen Alia to contribute towards the prosperity and pride of Jordan and our stakeholders by being among the world’s top 20 airports in each ASQ category,” he says.

“Ongoing training programmes, wellness sessions, always looking to make improvements by analysing the survey results and having quality on the agenda of everything we do has created a passenger-focused corporate culture across the airport.”

Binger is particularly proud of efforts to make the security process more customer friendly, which started by simply persuading army staff on security duty to ditch their military uniforms for less intimidating blazers and trousers. But Binger is among the first to admit that QAIA’s impressive new 100,000m2 terminal – phase one opened in 2013 – has played the major part in the airport’s ASQ success.

“Passenger satisfaction levels have soared since the new terminal opened,” enthuses Binger. “All I really need to say is that before it opened the old terminal ranked 186 in the world in ACI’s ASQ survey. Today it ranks 34 in the world and this needs to be seen in context as we currently bus 40% of our departing passengers to aircraft parked at remote gates. Its impact has been truly remarkable.”

A host of new retail and food and beverage (F&B) outlets, which have included a number of local brands and concepts to help create a sense of place – and a huge duty free walkthrough store operated by World Duty Free – have also helped contribute towards its popularity. Retail and F&B operations currently account for 20% of the airport’s non-aeronautical revenues. Airport expansion

When AIG was awarded a 25-year concession to operate QAIA, it pledged to build the new terminal to better equip the gateway to handle rising demand. And it has been as good as its word.

However, the need to continue to use the old terminal while the new one was being built meant that it had to be constructed in phases with the main terminal building initially being followed by two piers built on the site of the old terminal. With the old terminal now demolished, work is underway on the new $200 million pier extensions that will effectively complete the first phase of the new terminal and equip QAIA to handle 12 million passengers per annum (mppa).

When these open in 2016, the 46,500m2 piers will boast 13 fixed link bridges – four of which will be capable of simultaneously accommodating either two narrowbody or one widebody aircraft and, if required, both arriving and departing flights at the same time – and 17 contact gates.

The additional gates will also ensure that AIG no longer has to bus 40% of QAIA’s departing passengers to aircraft parked at remote gates. “We are currently gate constrained because we only have the capacity to serve around 60% of our departing passengers from contact gates,” remarks Binger. “We don’t like this as it is a challenge and it is not the best customer service.

“Thankfully, it will be a thing of the past from 2016 and, when it is and we are able to provide all our passengers with top quality services from the moment they step inside the building until the moment they leave, I expect our terminal to be ranked as one of the best in the world in the ASQ survey,” he continues.

Completion of the expansion programme will take AIG’s investment in Queen Alia past the $1 billion-mark since it took over responsibility for operating the gateway on 1 January, 2008. And the forward thinking airport already has further expansion programmes on the drawing board to raise its capacity to between 16mppa and 20mppa by 2032. AIG has also been boosted by the news that the Jordanian government will rehabilitate the airport’s north runway this year, making it available for commercial operations for the first time since it took over responsibility for managing the airport. Binger reveals that this will be a significant development for the airport, making it less vulnerable to the impact of bad weather.

AIG will manage the project on behalf of the government, which under the terms of the 25-year concession is responsible for providing two certified, parallel runways. “We expect to re-open the north runway later this year, which will allow us to carry out maintenance on the south runway before becoming a two-runway airport again for the first time in nearly a decade,” says Binger.

“Our aim is to continue to enhance our passenger capacity and service levels to help Queen Alia reach its full potential as a regional transfer hub,” he adds. “It might sound ambitious, but the new terminal already ensures that we offer some of the fastest and more convenient transfer times in the world. There is no reason to believe that we cannot build on this as we develop our route network.”

The goal is in line with the Kingdom’s national tourism strategy of not trying to compete with the neighbouring major hubs of Dubai, Doha, Abu Dhabi and Istanbul.

“We want to create our own niche so we complement instead of compete against the big hubs on our doorstep, as there is no way we could win that battle,” admits Binger.

“We have the best transfer product in the region. It is so easy to transfer through Queen Alia because of the short walking distances involved and the efficient process of transferring between one flight and another. This is our unique selling point and therefore our opportunity to develop into a niche hub in the market.”

With a record 7.1 million passengers (+9% year-on-year) passing through QAIA in 2014, there is no denying that the new terminal and piers, when they open, will be needed to help AIG meet rising demand.

Binger is, however, quick to point out that last year’s impressive upturn in passengers was primarily down to the fact that 2013 was a “flat year” for traffic growth at QAIA due to political unrest in other parts of the world.

With the exception of 2013 and the immediate aftermath of the Arab Spring, he notes that QAIA has typically enjoyed traffic growth of around 10% per annum and admits that he would be delighted with something similar to this in 2015.

For now he is predicting “modest growth” for the year, but won’t as yet be drawn on any figures because of the continuing civil war in Syria and political unrest in Libya and other parts of the Middle East.

Royal Jordanian is the biggest airline at QAIA, accounting for around 44% of the market. Other big players in Amman include Emirates, Qatar and Saudi Arabian Airlines while low-cost carriers such as flydubai, flynas and Air Arabia are beginning to make an impact. Binger is more than aware that for QAIA to succeed in its ambition to be a leading transfer hub it needs a strong Royal Jordanian. He feels that the recent addition of the Boeing 787 Dreamliner to the Jordan flag carrier’s fleet is a step in the right direction.

“Royal Jordanian has an important role to play and I am confident that its investment in the Dreamliner will give it the operational flexibility to develop its network out of Amman, particularly to the fast growing Asian market and Africa,” he muses.

The unveiling of its new piers and re-opening of its second runway in 2016 may just be the start of good times for Queen Alia International Airport.