United Arab Emirates (UAE) national carrier, Etihad Airways, will contribute US$2.9 billion to the US economy and support 23,400 American jobs this year, according to new research by the global consultancy Oxford Economics.

The study, commissioned by the Gulf hub carrier, projects that by 2020 the airline’s operating expenditure and capital investments will almost double to support 46,200 American jobs and deliver US$6.2 billion a year.

These are among the key conclusions of the Oxford Economics Report to quantify the economic contribution which the airline makes to the US.

The study assessed the airline’s capital expenditure with US suppliers and its operating expenditure in the country to calculate a value for direct, indirect, induced and catalytic contributions.

“Open Skies is good for competition and good for the consumer, but most of all today’s report shows it is also good for the American economy,” said Vijay Poonoosamy, vice president international and public affairs, Etihad Airways.

“Since 2005, the year before we started flying to America, our expenditure and activities in the US market have supported thousands of jobs and helped to fuel domestic economic growth. By 2020, Oxford Economics calculates that we will have committed US$41 billion to the US GDP through a combination of direct expenditure on our day-to-day operations in the US and our long-term relationships with American partners including Boeing, GE Aircraft Engines and Sabre Airline Solutions,” he added.

Since 2004, when it announced plans to acquire five Boeing 777-300ER aircraft, Etihad has introduced or ordered almost 120 Boeing aircraft at a current list price of $36.5 billion, including more than 70 787 Dreamliner and 25 next-generation B777X aircraft. The airline has also chosen US suppliers for other equipment ranging from cabin interiors to in-flight entertainment systems.

According to Poonoosamy, a number of US airlines were also beneficiaries of Etihad Airways’ presence in the US market. In 2014, Etihad Airways delivered 182,000 connecting passengers onto US airlines including American Airlines, United Airline, Delta Air Lines and JetBlue Airways.

This is forecast to grow to approximately 300,000 in 2015, an increase of 65 per cent, following the introduction last year of new routes to Los Angeles, San Francisco and Dallas Fort Worth. “Put into perspective, that’s equivalent to five full 737-800 flights every day of the year,” said Poonoosamy.

In addition to the airline’s direct expenditure, Oxford Economics says a further US$1.3 billion will be spent in America by the 260,000 international visitors which Etihad expects to carry to the US this year from a range of markets, including countries across the Middle East and Indian sub-continent. 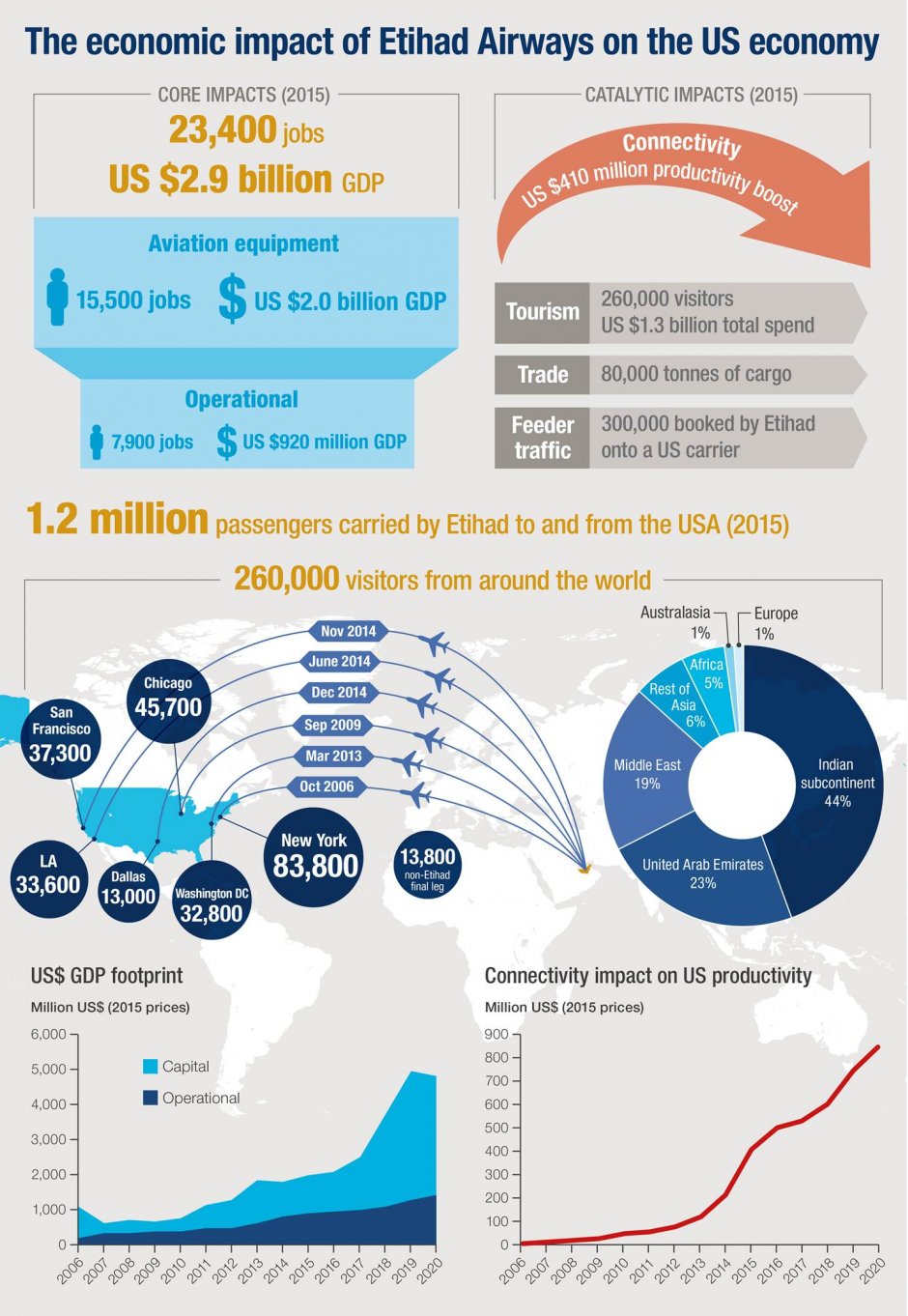 The economic benefits of connectivity between the US and destinations in the Etihad network have been valued by Oxford Economics at US$410 million this year, rising to an expected US$850 million by 2020.

According to Poonoosamy, Etihad’s presence in the US market had generated economic activity for third party organisations including hotels, ground transport providers and a wide range travel industry partners.

The airline’s economic contribution is further strengthened by its cargo activities, which will contribute to the movement of 80,000 tonnes of freight to and from the US this year. In addition to the freight space in the bellies of its passenger jets, Etihad has formed a strong partnership with the US aviation company Atlas Air, which operates three Boeing 747 freighters on behalf of Etihad Cargo.

“Our most important contribution to the US is choice,” Poonoosamy said. “We deliver increased options for consumers, and through our exceptional in-flight service between the US, Abu Dhabi and beyond we connect American travellers to destinations which were poorly connected, or perhaps not connected at all.”

“We are all growing as a result of Open Skies,” he added. “That is good for the airlines, good for the US economy and good for customers.”