Brazilian manufacturer Embraer has confirmed at the Paris Air Show that SkyWest Airlines will purchase eight new, dual-class Embraer E175 jets to fly for Alaska Airlines. The new aircraft, to be delivered in 2016, will replace eight older regional jets SkyWest currently flies for the Seattle-based carrier.

The announcement comes the same month SkyWest takes delivery of the first of seven E175s purchased last November to be flown for Alaska Airlines under its capacity purchase agreement (CPA).  The regional carrier will begin flying the jets for Alaska Airlines on July 1, 2015 with the start of new services from Seattle to both Milwaukee and Oklahoma City, and between Portland, Oregon and St Louis.

However, the aircraft will actually debut in passenger service on routes from St Lake City to Portland and Seattle on the morning of July 1, 2015 and will also be used between Seattle and Ontario, California from July 2, 2015 until October 1, 2015 and Portland and Austin, Texas from November 5, 2015.

"We're pleased to enhance our Alaska Airlines partnership with these new aircraft," said Chip Childs, president SkyWest. "Our first E175 flights for Alaska will launch next month, and we look forward to continually improving the product we provide to our partner and their customers with eight additional E175 aircraft next year."

The SkyWest E175s flying for Alaska Airlines will be configured in a two –class layout with 12 seats in First Class and 64 in Economy.  The newly ordered aircraft will be used to replace the eight 70-seat Bombardier CRJ700s SkyWest currently flies for Alaska Airlines and will enhance fleet commonality and efficiency.  SkyWest said it expects to retire these aircraft by autumn 2016.

These eight new aircraft are part of SkyWest’s previous order for 100 (40 firm and 60 reconfirmable) E175 current generation E-Jets – with an additional 100 options – placed in May 2013.  This reconfirmation brings its total number of firm orders to 55 aircraft.

"The E175 is an excellent regional aircraft that offers customers comforts similar to our mainline jets," said Andrew Harrison, executive vice president and chief revenue officer, Alaska Airlines on the introduction of the new aircraft type into its fleet.  "The spacious E175 is particularly well-suited for long, thin routes that are too far for our existing regional aircraft."

Here's the proposed Alaska Airlines Embraer E175 schedule as extracted from OAG Schedules Analyser on the afternoon of June 15, 2015... 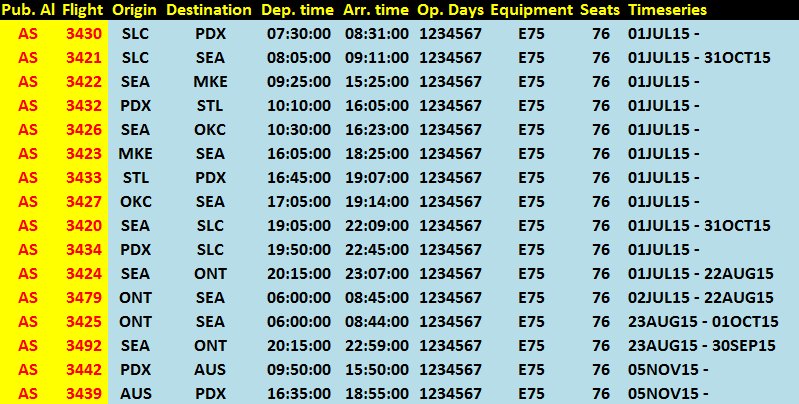