Durban’s King Shaka International Airport has become a trailblazer for African aviation. It’s not just the state-of-the-art facilities or the high-ranking service quality that sets it apart. More, it is the fact that it has taken the oft-mentioned potential of the continent and turned it into a reality.

The airport sits at the heart of the thriving Dube Tradeport aerotropolis, a 7,000-acre site about 18 miles north of Durban that proves once and for all that innovative, strategic planning can capture aviation’s many economic advantages.

Not that the planning for the new airport was fully appreciated when it opened some five years ago. Back then, it was a prime target for airlines impoverished by the global economic meltdown, which viewed King Shaka as a needless expense. The claim was that the existing airport still had some life left in it.

“Some, maybe,” accepts Terence Delomoney, general manager of King Shaka International Airport. “But that’s not the point in any case. Building the airport was a sensible business decision taken co-operatively by all the parties involved. And the five years since have proved the business case was right.”

A new airport for Durban had actually been on the cards since the 1970s. It was accepted that the existing facility – built in the 1950s between an oil refinery and a highway – had limited expansion capabilities. And although the 2008/2009 global economic meltdown did provide some breathing space, it was clear that this was merely a temporary reprieve and not a cure.

“The limited expansion potential wasn’t the only issue,” explains Delomoney. “The runway was just 2,400 metres long so a fully laden Boeing 747 couldn’t take off. Reducing the payload obviously affected the long-haul opportunities for a city that really needs long haul.

“Add to that the fact that KwaZulu-Natal is a very active province and was keen on building an aerotropolis to maximise the impact of air connectivity,” he continues. “And selling off the old airport land also enabled some critical port developments at the old site.”

The 2010 soccer World Cup provided the spark that lit the fire under the project. And although the global recession did cloud the issue briefly, there is little doubt that the new aerotropolis is performing as predicted.

Thinking big for Dube Tradeport to succeed, air connectivity is vital. King Shaka is playing its part admirably. Delomoney reports that operations are efficient and service standards are high, placing the airport in the top 30 in the world according to Airports Council International benchmarking figures, number two in Africa.

With a strong platform to build on, the goal is to entice more airlines to serve KwaZulu-Natal’s primary city. It is not quite as straightforward as it seems, however. King Shaka is part of the Airports Company South Africa (ACSA) network. There are four divisions within ACSA, King Shaka at Durban being one. O.R. Tambo in Johannesburg, Cape Town and the combined regional airports are the other three.

“Our challenge is that we are close to Johannesburg, which is established as the ACSA hub for South Africa so we’re not going to try to compete against that,” says Delomoney. “But we do need to get relevant, direct flights.”

There have already been some successes, notably to the Middle East. Emirates flies daily to Dubai with good load factors, for example. But the fact that it flies four times a day from Johannesburg to Dubai indicates that there is more traffic there for Durban to capture.

Meanwhile, Qatar Airways will start a Durban service via Johannesburg later this year. Delomoney says the aim is to build up that business and show the potential for a direct connection.

“In Europe, the UK is obviously an important link for South Africa and we’re also chasing another European hub to improve our European coverage,” the King Shaka general manager reveals. “And India is tremendously important too. Durban has the second biggest Indian population outside of India so there is massive potential. But there is no direct service between India and South Africa at the moment. It’s hard to attract an Indian carrier because none of them are doing particularly well.”

King Shaka is also looking to stimulate more low cost carrier activity. That, according to Delomoney, will really grow the cake rather than merely slice it differently. Converting potential demand to real, paying passengers is a complex art, however, and the price and service needed to stimulate the market into action will take some working out.

As is stands, King Shaka has enough capacity to accommodate extra business. The airport served close to 5 million passengers in 2014 and has space for 7.2 million passengers. The international terminal can get busy during peak periods and the team are looking at some short term options of alleviating this challenge.

Airside, the airport has a 3,700-metre runway, allowing it to accommodate the leviathan of the commercial skies, the Airbus A380. The aircraft can even take off fully laden, finally opening up Durban to the entire world.

There are some developments in the pipeline The airport will be improving its taxiway system to eliminate a congestion hotspot, for example. Additionally, it will be building two more remote widebody stands to complement the two contact gates and two remote stands it currently operates.

“This is not just about expansion but also about the nature of the business at the airport,” explains Delomoney. “Durban is an events-driven city so we often have peaks. Also, we act as a diversion airport for O.R. Tambo so during bad weather or other emergencies we could have a number of widebodies looking to park here. The two extra remote stands will be completed in a year or two and give us much needed flexibility to deal with these situations.”

The surrounding aerotropolis is responding to King Shaka’s heartbeat. New office blocks and conference facilities are springing up and a special Industrial Development Zone (IDZ) – that provides a number of benefits to companies, including tax relief – is already home to such blue chip companies as Samsung.

This doesn’t mean the airport will disappear into a faceless corporate jungle. Rather, the plan is to enhance King Shaka’s sense of place. A lot of the short-term work will focus on improving the ambience, says Delomoney. “Part of this will come from making the airport a focal point for local communities,” he continues. “It will also help improve non-aeronautical revenue if we get the locals coming to do some shopping or to eat.”

That could be important. Charges have been an issue since King Shaka’s inception with airlines particularly uncomfortable about the idea of cross-subsidisation. The larger airports in the ACSA network contribute to the running of the regional airports but airlines say that they shouldn’t pay for facilities they don’t use.

“ACSA operates a network of airports,” argues Delomoney. ”And the regional airports provide vital feeder services for their flights. If these airports are not kept up-to-date it could lose the airlines business. The regional airports also have the potential to grow if they are operated well and could provide some extra business in the future.

“With a network of airports there are also economies of scale in other areas so that helps airlines too,” he continues. “The regional airports are able to be more efficient. Effectively, they are entwined in the operations of the local hub so it is not a traditional cross subsidisation model.”

Five years on, when King Shaka marks its 10th anniversary, Delomoney is confident that such debates will be a thing of the past as the airport and Dube Tradeport will have proven their worth to all their clients.

Further direct connectivity to Europe and the Middle East would be a sure sign of success as would greater LCC activity, says Delomoney. Dube Tradeport in turn would be welcoming greater volumes of cargo and have even more companies in the IDZ. A hotel or two might even be in construction.

“I would also like to see the development of new products, perhaps resort-type products, as Durban has everything you need, including a superb variety of attractions and good year-round weather,” Delomoney reveals.

The 10th anniversary could also mark the beginning of the next phase of development at the airport. King Shaka has an ultimate build-out capacity of 45 million passengers – a figure it is not expected to reach until 2060. But, with the 2022 Commonwealth Games going to Durban and a host of other major world events heading for the city, that future could come quicker than expected.

If that happens, extensive consultation will be the name of the game, a lesson learned from the building of King Shaka. For now, though, the focus is on World Routes, another successful, global event to be hosted by Durban. Delomoney is excited by the prospect of showing off the city and province. He feels the event will be important to Durban’s future – and, as with the decision to build King Shaka, it is the long-term view that holds sway.

“It would be great to get some direct services out of it but really it is about showcasing Durban, KwaZulu-Natal and South Africa and keeping the city, the province and the country in the front of people’s minds when they are thinking destinations and route development,” he says.

“World Routes is great exposure for us.” That exposure will centre on Durban’s rich, vibrant culture. As mentioned, there is the large Indian population providing an eastern influence. Combined with the local Zulu population and the historical European presence makes Durban a true melting pot.

This is perhaps best experienced through the local cuisine, which includes such delights as “bunny chow”, a hollowed out piece of bread full of curry. There is also one of the world’s great coastlines with beaches perfect for surfing or just relaxing. Durban is superb for sports too, especially of the extreme variety. Diving with sharks, mountain biking in the Drakensberg range or bungee jumping at the Moses Mabhida stadium are all possible. And of course, there are plenty of games reserves nearby as well. 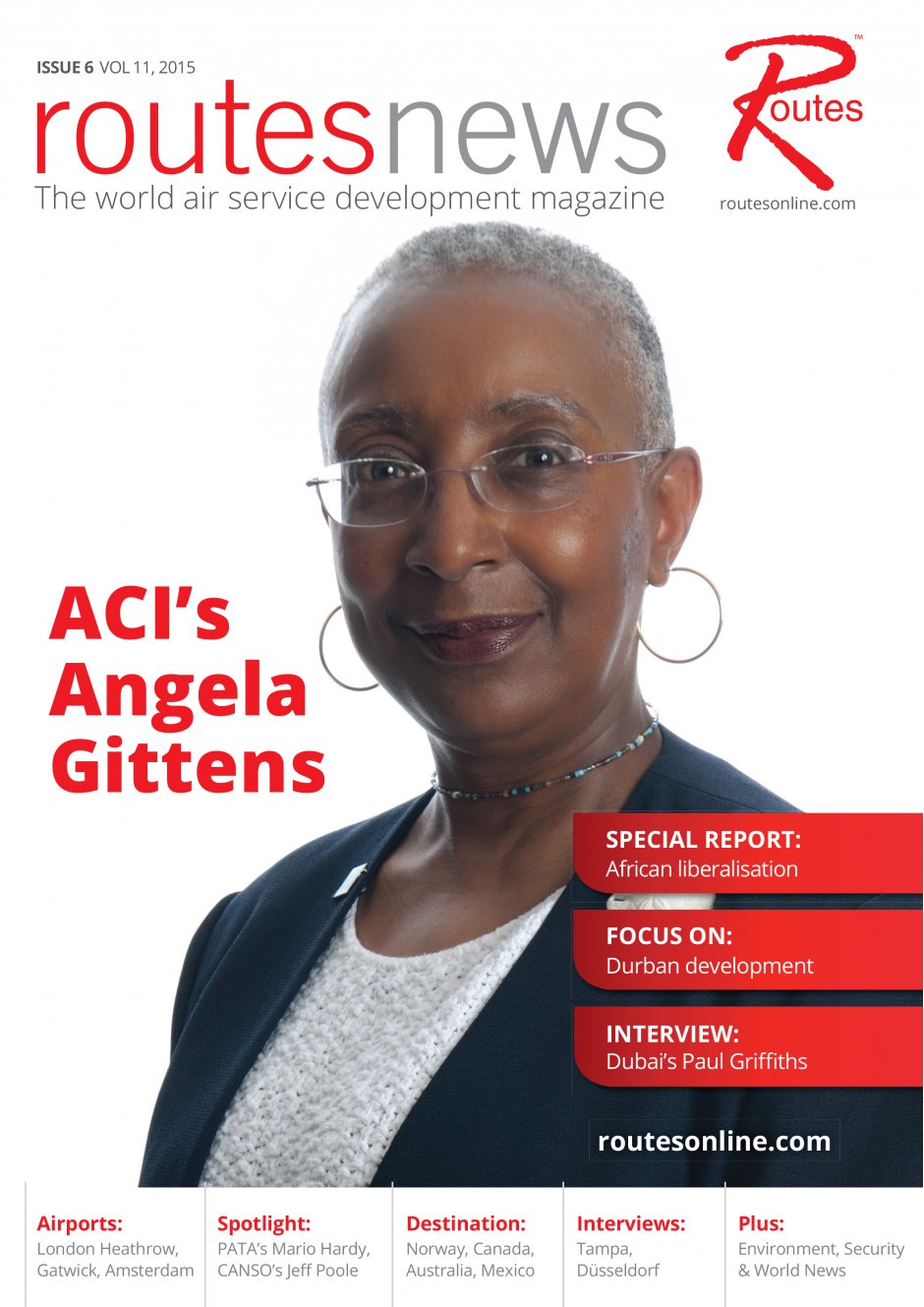