The new Harare-based Zimbabwe operation of proposed pan-African low-cost carrier fastjet could be up and operational within the next four to six weeks after its first aircraft touched down in the country late last week.  The Airbus A319 was ferried between Montpellier in France and the Zimbabwe capital on September 18, 2015 via a short stopover in Hurghada, Egypt.

The expanding airline already operates into Zimbabwe from the Dar Es Salaam base of its original Tanzania business, but the arrival of the new aircraft represents a significant step forward in its activities in southern Africa.  It will initially use the aircraft to launch domestic flights between Harare and Victoria Falls.

Speaking exclusively to Routesonline on the sidelines of the World Routes Strategy Summit in Durban, South Africa, where he was a speaker, Richard Bodin, Chief Commercial Officer, fastjet confirmed the arrival of the aircraft.

“Yes, we now have our first in Zimbabwe and can now formalise the final stages of getting the business of the ground,” he said.  “The arrival of the aircraft in Harare has enabled the local market to realise we are almost ready to fly and they are now working hard to support our entry to market.”

fastjet is currently in the advanced stages of the licencing process in Zimbabwe having been awarded Air Service Permit (ASP) from the authorities in the country in March 2015.  These afford the airline authority to operate air services to both domestic and international destinations within and from the country, but it still awaits the award of Air Operator’s Certificates (AOCs) which will allow the commencement of operations.

To secure this the aircraft will this week complete a demonstration flight for the Civil Aviation Authority of Zimbabwe and once approval is granted the airline will open reservations, launching flights no early than two weeks from that date. 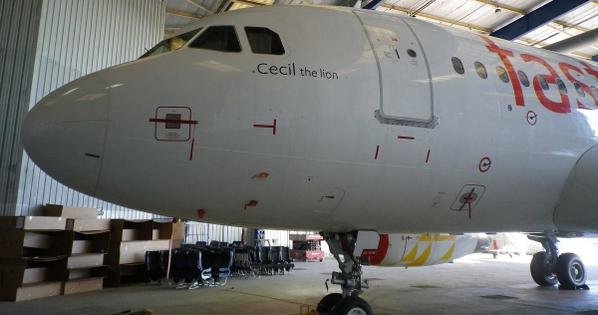 The first fastjet Zimbabwe A319 has been sourced on a six-year operating lease from Industrial and Commercial Bank of China Limited (ICBC).  The aircraft has spent almost entire operation in southern Africa having originally been delivered to South African Airways in September 2004.  It has spent almost the last year and a half in storage, initially at Johannesburg and from November last year at Montpellier.

The jet is already carrying local Zimbabwe markings (registration: Z-FJE) and has been christened ‘Cecil the Lion’ after the 13-year-old male Southwest African lion who was shot and killed by a recreational big-game hunter at the start of July this year.  The killing drew international media attention and sparked outrage among animal conservationists, politicians, celebrities and the general public.  ‘Cecil’ had primarily lived in the Hwange National Park in Matabeleland North, Zimbabwe.

The airline has confirmed that this aircraft will be followed in November by the arrival of a sixth A319 which will serve as the first aircraft for its new Lusaka, Zambia-based business, which it hopes to get off the ground in December.  This will be the first aircraft aquired, rather than leased by the low-cost carrier and a final transaction on the purchase of the aircraft from an entity managed by BBAM was closed on September 23, 2015.

"This aircraft has been earmarked to be the first in the fastjet Zambia fleet and following reconfiguration and painting is expected to be flown to Lusaka, Zambia in early November," confirmed Ed Winter, Chief Executive Officer, fastjet.