Southern African regional carrier, Proflight Zambia made a significant step forward in its operations during World Routes. The airline today (September 22, 2015) inaugurated scheduled flights between Lusaka and Durban, in the process bringing a number of guests to King Shaka International Airport and onto the event.

The return service in the afternoon will be used by the airline’s World Routes delegation to return back to the Zambian capital after two-and-a-half days of meetings at the Durban Inkosi Albert Luthuli International Convention Centre.

The new three-times weekly Lusaka – Durban link will see Proflight Zambia complement the existing operations of South African Airways Express on the international city pair and will open up an alternative schedule for travellers from Zambia to enjoy the sea, sporting and cultural events, shopping and business prospects across tha KwaZulu-Natal province. 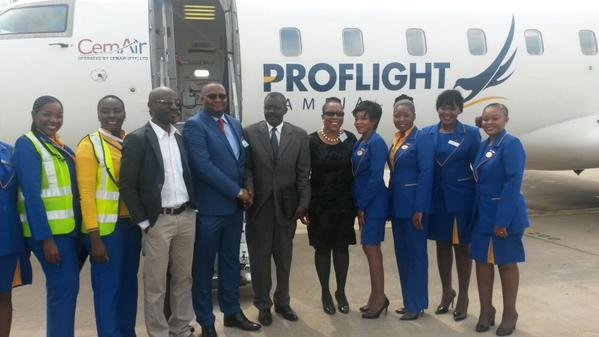 The new flight is the second international route for Proflight Zambia and follows the launch of two domestic flights from Lusaka to Kitwe and Kafue National Park this year and is operated by its Bombardier CRJ100 which is wet-leased from Saouth African carrier CemAir.

“Proflight’s new international destination brings opportunities to both cities because it offers travellers more access for both business and leisure. Durban is one of the most important destinations in the region for trade and leisure, and this flight offers good connectivity with our domestic flights too,” said Captain Phillip Lemba, Director of Governance Government and Industry Affairs, Proflight Zambia.

Speaking to Routesonline on the sidelines of the World Routes network development forum in Durban, South Africa, commercial director, Keira Irwin, Proflight Zambia, outlined how the South African city is part of a strategic growth that will see the operator look at more cross-border development and grow on its regional domestic roots.

“South Africa as a growing market continues to play an important part in Proflight’s international network expansion strategy,” she said. “Travellers from Lusaka and elsewhere in Proflight’s extensive network will be able to attend to business in Durban, go shopping, visit the sea and spend time on the beach, visit family and friends, go to concerts and shows, and attend rugby, football and cricket matches.”

The new service will also enable South Africa visitors to more easily visit Lusaka for business and to enjoy Zambia’s tourist attractions, while the Durban inbound sector also provides smooth connections with our services between Lusaka and Ndola, Kitwe, Solwezi and Mfuwe,” she added.

Proflight Zambia will next year celebrate its 25th anniversary and having out-lived national entities Zambian Airways and Zambezi Airlines, it now operates the largest fleet of aircraft in Zambia, operating a mix of scheduled and charter flights. From its base in Lusaka its domestic routes include, Livingstone, Mfuwe, Lower Zambezi, Ndola, Solwezi, Kitwe, Kafue National Park and Kasama, and regional routes to Lilongwe in Malawi and now Durban, South Africa.

Further network growth is on the cards as the carrier works to rebalance its fleet and increase its capacity offering. Its scheduled network is currently served using three 29-seater Jetstream 41 aircraft; four 18-seater Jetstream 32; and two 12-seater Cessna Caravan C208 aircraft, but there are discussions to transition to an all-jet operation over time. The debut of the leased 50-seat CRJ100 has seen the airline reduce frequencies in some markets but still show an overall capacity increase, while a second unit is expected in 2016, with more to follow.