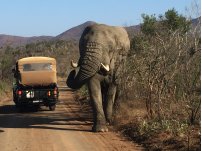 First on our agenda, and as offered within our own tour programme, was a safari. As recommended by many locals and the KZN team, we visited the region’s most famous reserve, the Hluhluwe Imfolozi Park, the oldest proclaimed nature reserve in Africa. Due to soaring daytime temperatures we weren’t fortunate enough to see any of the big cats, though the day offered close encounters with elephants, rhinos, giraffes, zebras, buffalo, gazelles and warthogs to name but a few. The safari was a truly unique opportunity to encounter these animals as they should be, in the wild within their natural habitat. 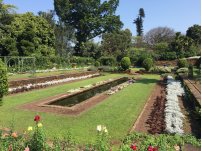 During our down time, between scheduled activities, the team took advantage of the stunning coastline and world renowned beaches. The wide stretches of golden sand provided the perfect opportunity to enjoy the sunshine and the warm waters of the Indian Ocean. The day also included a visit to the beautiful Durban Botanic Gardens, currently the oldest surviving botanic garden on the African continent and Durban’s oldest public institution. Here we witnessed a traditional African wedding alongside an array of flora and wildlife. During our free times in the evening the team decided to venture out to discover the Durban nightlife. Visiting many of the local bars in the fantastic Umhlanga area and further nights out on Florida road we experienced the more lively and welcoming side of the city.

In keeping with the safari, the next item on our list was one that could only be enjoyed in a few locations across the globe. Snorkelling with sharks may not appeal to all, but it was an activity that the majority of the team were keen to experience, offering snorkelers face-to-face encounters with these often misunderstood creatures. A short boat ride out to sea and after some very tense moments where fins appeared and the sharks circled, we were all in. The exclusion of a cage really gave us an up close and personal view of the blacktip shark’s underwater world, as they investigated our presence, often brushing up against us, and coming within inches of our faces.

Once the snorkelling was complete, Durban decided to treat us to one last incredible show of nature; during the 15 minute boat ride back we found ourselves in the middle of a humpback whale pod. We saw the recognisable expulsions of air as they came to the surface alongside the famous tail slap as our helpful guide explained their behaviour, social structure and habits. 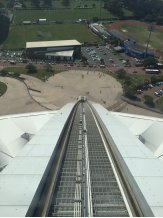 With less than 4 hours to our flight, we decided to visit the iconic Moses Mabhida Stadium and
enjoy the views its huge arch offers in a less traditional way. The “Big Rush” holds the Guinness World Record for being the world’s tallest bungee swing, standing at an incredible 350ft above the pitch and requiring jumpers to walk 352 steps to the platform. Manoeuvring to the jump position was nerve-racking in itself, with ladders, small platforms and high winds all contributing to the fear of the dizzying height.  With hearts in our mouths one by one we all made our jumps, free-falling 196ft and reaching speeds of 75mph, before swinging out over the pitch which hosted many of the 2010 FIFA World Cup matches. This final adrenaline-fuelled excursion marked the end of our time in Durban.

When arriving within this city we were faced with gloomy skies and bad weather, not what the team had initially expected when landing in South Africa. However over the course of the event and during our time after, the city took on a new image with clear blue skies, once-in-a-lifetime experiences and revealing itself to be a place full of incredible history, wonderful people and amazing stories.