Irish budget carrier, Ryanair is to open a new base at Vilnius International Airport in the Baltic State of Lithuania. The airline will station two Boeing 737-800s at the facility from October this year as part of a small restructuring of its operations in the Eastern European country.

The investment in the Lithuanian capital will bring a new three times weekly link between Vilnius and Berlin, a market currently served by Latvian carrier airBaltic, as well as a weekly flight to Malta. New routes to Birmingham and London Luton will be continued into the winter schedule, while more flights will be introduced on the Vilnius – Bergamo route, rising to five times weekly from late October 2016.

At the same time Ryanair will also modestly downsize its existing base at Kaunas in south-central Lithuania where it will reduce its stationed fleet from three to two units. This will coincide with the transfer of its routes from Kaunas to Birmingham and Malta to Vilnius, albeit it will continue to serve seven markets from the city. The switch is due to Lithuanian Airports incentives providing better rewards to fly from Vilnius versus Kaunas.

“This winter Ryanair will have four aircraft based in Lithuania, two in both Vilnius and Kaunas. Traffic to Vilnius with Ryanair will grow by 16 percent this year and we expect to carry 1.5 million passengers to and from Lithuania in 2016, of which 860,000 will be from Vilnius,” said David O’Brien, Chief Commercial Officer, Ryanair at a press conference announcing the changes at Radisson Blu hotel in Vilnius this week.

The expanded winter programme from Vilnius will see Ryanair serve 15 routes with 46 weekly flights and will see its Lithuanian network grow to 75 weekly rotations.

Ryanair will also shortly expand its presence in the country when it inaugurates flights to a third destination from the end of this month. The airline will introduce a new twice weekly link to Palanga from London Stansted from March 29, 2016 and expects to carry around 33,000 passengers on the route during its first year of operation.

The budget carrier has served the Lithuanian market for over ten years, initially with a London Stansted – Kaunus operation. It first introduced flights into Vilnius in May 2011 when it debuted services from Bergamo, Bremen, Dublin, Girona, London Stansted and Rome Ciampino. Its expanded offering will mean it will be providing over 3,000 seats per day into the Lithuanian market from the coming winter schedule.

Analysis of OAG schedule data shows that Ryanair is the largest operator in the Lithuanian market by departure capacity, a position it has held since 2010. However, despite growing its own activity by 64.9 per cent since the start of the decade, an average annual rise of 13.0 per cent, its share of seats from the country has slipped from a high of 40.6 per cent in 2011 to 32.0 per cent in 2015, due to growth from rivals, particularly Wizz Air.

Meanwhile, last year we reported that Ryanair could be considering adding smaller 737-700s to its fleet after acquiring a single aircraft for crew training. This aircraft was also used to substitute for larger 737-800s during periods of down time, but it appears the Irish carrier has found a new market for the aircraft as a private jet available for corporate charters.

The airline has reconfigured the aircraft with just 60 Business Class seats and unlike the no-frills service provided on its normal aircraft, will provide a corporate cabin fitted with leather seats, at a pitch of 48 inches, and fine dining on-board catering. Its charter hire division says the aircraft will be made available on a "cost per hour" basis on routes of up to six hours with overall quotes depending on the departure and arrival airport. "We offer the most competitive rate in Europe," it adds. 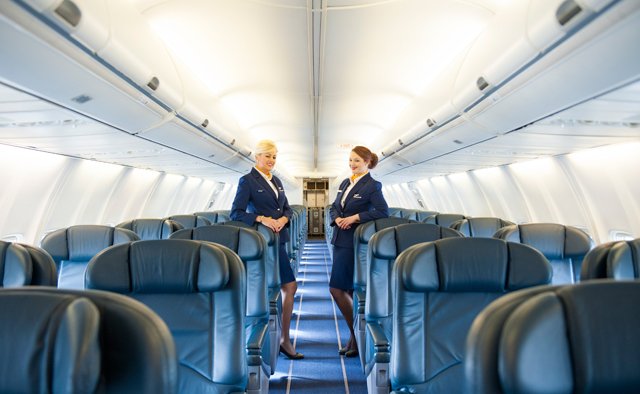