Irish airport operator daa has confirmed it is progressing its plans to deliver a new runway for Dublin Airport. The 3,110 metre runway will be built 1.6km north of the existing main runway and is expected to be delivered in 2020 to significantly grow Ireland’s connectivity.

Dublin Airport is investing in the region of €320 million in this multi-faceted project which will comprise multiple contracts and packages of works. It received planning permission in August 2007 to build a new runway, but the plans were put on hold due to the economic downturn and subsequent fall in passenger numbers.

However, the recovery in passenger numbers, particularly in the past two years, has been significant and daa believes the continuation of growth at Dublin Airport is dependent on having sufficient capacity available to satisfy future demand.

“Last year was the busiest year ever in the airport’s history with a record 25 million passengers travelling in 2015. Passenger numbers continue to grow strongly in 2016 with double digit growth recorded in the first two months of this year,” said Kevin Toland, chief executive officer, daa.

“We are progressing our plans to deliver the new runway in accordance with the development and pathway for growth outlined in the Government’s National Aviation Policy (NAP). Dublin Airport’s North Runway will significantly improve Ireland’s connectivity supporting trade, foreign direct investment and tourism,” he added.

“Driven by demand from airlines and passengers, Dublin Airport’s current runway infrastructure is at capacity during the peak hours and this must be addressed to enable future growth. The north runway will significantly improve Ireland’s connectivity which plays a critical role in growing passenger numbers and sustaining the future economic development of Ireland.”

The rapid recovery in passenger numbers is due to a combination of almost 50 new routes and services in the past two years, significant additional capacity increases on a number of existing routes, and nine new airlines operating at Dublin Airport. Total long-haul connectivity has grown by more than 65 percent since the airport’s Terminal 2 opened, while short-haul connectivity has increased by 16 percent.

“Driven by demand from airlines and passengers, Dublin Airport’s current runway infrastructure is at capacity during the peak hours and this must be addressed to enable future growth. The north runway will significantly improve Ireland’s connectivity which plays a critical role in growing passenger numbers and sustaining the future economic development of Ireland,” said Toland.

Dublin Airport’s North Runway development has the potential to open up connectivity to a range of long-haul destinations, particularly in fast growing economies in Asia, Africa and South America. It is estimated that the delivery of a new runway could support a further 31,000 new jobs over the next two decades, contributing €2.2 billion to GDP.

The current planning permission was granted with 31 conditions attached. “We have stated previously that two of these conditions are onerous and would severely reduce the future operational capacity of the airport at key periods. This has implications on our ability to support future traffic growth at the airport and we are looking at how this can be addressed,” explained Toland.

“We are very conscious of balancing the national and business needs with those of our local communities and we will continue to work closely with our neighbours in relation to this project,” he added. 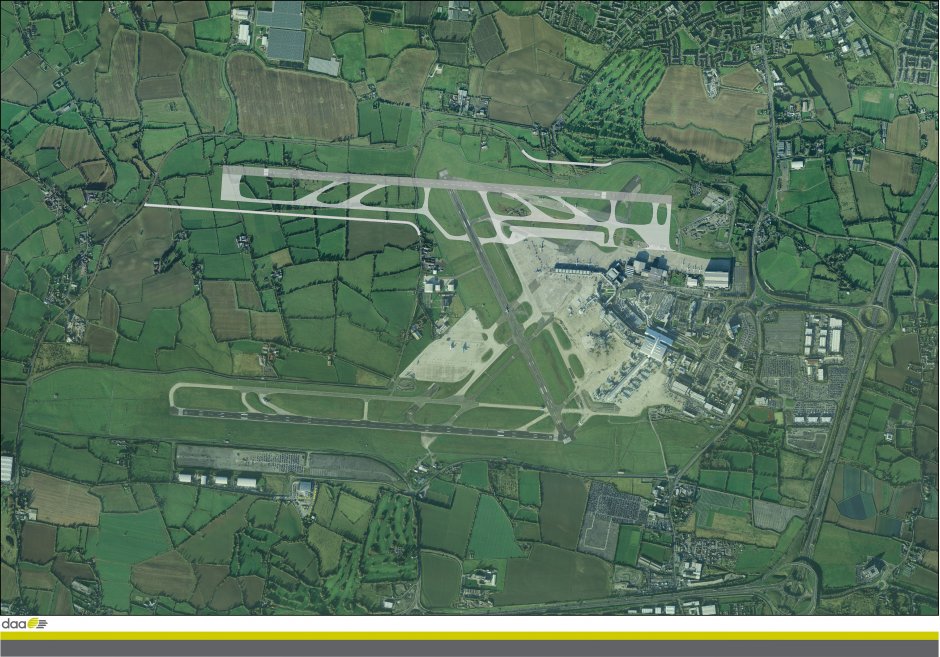 The North Runway has featured in successive Local Area and County Development Plans since the 1970s. As a result of years of careful planning, land for this development was safeguarded over 40 years ago, so the runway will be delivered within the airport’s existing land bank.

Enabling works are due to commence later this year with construction of the north runway scheduled to start in 2017. The project will support around 1,200 jobs during its development as well as generating significant employment opportunities in the local supply chain for construction materials.

The development of the new runway will further enhance Dublin Airport’s economic impact which currently supports or facilitates a total of 97,400 jobs in the Irish economy. A major study conducted by economic consultants InterVISTAS last year found that Dublin Airport contributes €6.9 billion to the national economy.

The overall impact includes almost 16,000 people employed directly at the airport campus by daa, airlines and other companies, the multiplier effects that flow from that employment, and the other sectors of the Irish economy that are facilitated by Dublin Airport.

Ireland’s Minister for Transport, Tourism and Sport, Paschal Donohoe TD, welcomed the news saying that the runway project was a vital piece of infrastructure that would support Ireland’s continuing economic recovery.

“This project is of major strategic importance to Ireland as an island economy, in terms of improved connectivity. It has the potential to create thousands of jobs, both directly and indirectly, over the coming years. Our National Aviation Policy (NAP) recognises our dependence on aviation for our links with the rest of the world and the importance of ensuring that the sector can continue to grow to underpin economic recovery and development,” he said.

After hitting a ten year low of under 12 million departure seats in 2011, Dublin Airport has boosted its capacity offering by almost quarter over the subsequent four years with an average annual growth rate of 6.2 percent between 2011 and 2015.  It is currently forecasted to grow capacity a further 2.0 percent in 2016, based on published schedules.

The western European market remains the core offering from Dublin and accounts for over 90 percent of departure capacity.  Its offer has grown by 16.4 percent into this region, but is a growth that has been far exceeded by other parts of the world.

Enhanced connectivity into North Africa has seen capacity grow ten-fold, while buoyed by the arrival of Emirates Airline and additional frequencies into the Middle East capacity has more than quadrupled since 2010.

A continued focus on the Transatlantic market has seen capacity to North America almost double this decade, while new flights are now being offered into East Africa (Ethiopian Airlines) and Latin America (Thomson Airways). In fact, as the image below - taken from our new data analysis that will appear in the new-look Routes News magazine which will be officially launched at Routes Europe later this month - shows, Dublin Airport actually recorded the largest rise in transatlantic seat capacity between 2014 and 2015.