Oman Air has highlighted the price airlines are willing to pay to maintain accessibility into the world’s leading international hubs by paying a record price for a slot pair at London’s Heathrow Airport.  The airline paid a reported $75 million for the morning inbound and outbound slot that has enabled it this month to launch a second daily rotation in and out of the hub from and to its Muscat base.

The major deal with Air France, KLM and Kenya Airways, which also includes the lease of Boeing 787 Dreamliner equipment from the African flag carrier, breaks the previous Heathrow Airport slot record of $60 million paid by American Airlines to SAS Scandinavia Airlines in 2015.

Heathrow’s unique capacity constraints – it is operating at 98 percent capacity – coupled with the high demand from airlines due to strong passenger yields at the airport, mean slots are hard to obtain. The airport currently claims it has a queue of thirty airlines waiting for slots.

It’s estimated that due to demand from airlines and passengers to use the airport, far outstripping supply, passengers are already paying on average £95 more per a return ticket then if Heathrow had extra capacity (Frontier Economics, 2014: Impact of airport expansion options on competition and choice).

Oman Air launched its second daily Muscat – London Heathrow rotation on April 12, 2016.  It said the investment in the slot pair was in response to overwhelming demand from air travellers for flights between Muscat and London, and from London to onward destinations in the Middle East and Asia. 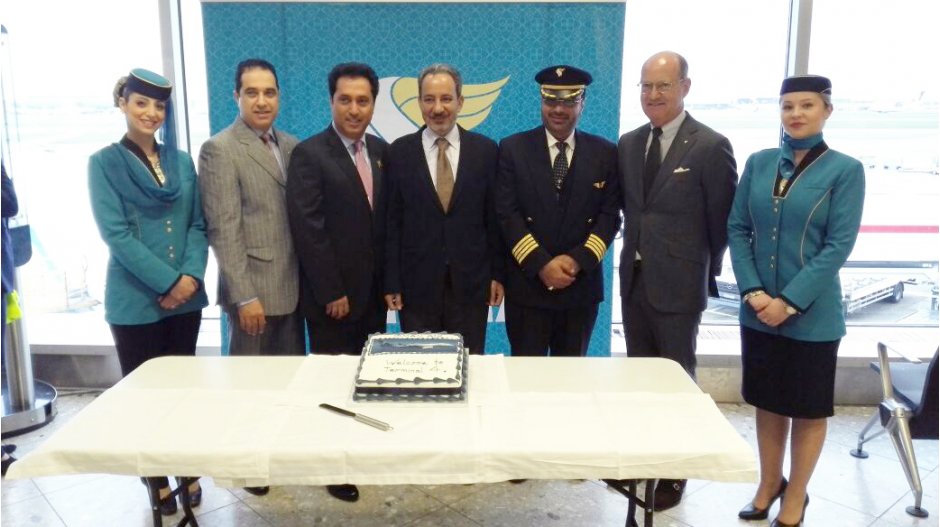 “This is one of Oman Air’s flagship routes and our second daily frequency is a clear indication of the strong demand for flights between these two great cities. As a result of this new service, many thousands more travellers will be able to visit Oman and discover its remarkable beauty and warm hospitality, or continue on to one of Oman Air’s many other exciting destinations,” said Paul Gregorowitsch, chief executive officer, Oman Air.

The additional flight has introduced a level of complexity to the Oman Air London operation which will now be split between two terminals at Heathrow Airport.  This new flight, which operates through the night from Muscat (departing 01:25), and arrives in the UK at 06:30 and then departs at 08:25 and arrives back in Oman at 18:55, utilises Terminal 4 at the airport.  The airline’s existing rotation that departs Muscat at 14:00 and arrives in London at 18:20 uses Terminal 3.

“We believe that it is vital to offer our customers this increased choice now and, in the short term, that means flying out of two terminals in London. However, we are working closely with the airport authorities at Heathrow to accommodate all of Oman Air’s operations at Terminal 4 from the earliest possible date,” said Gregorowitsch.

Clearly the benefits far outweigh the costs and complexities this growth offers to Oman Air.  The second flight will enable favourable connection opportunities in London to major US cities like New York, Boston, Chicago, Miami, Los Angeles and San Francisco, and Toronto in Canada.

“Our customers have expressed a strong desire for a second frequency into London and we are very pleased to be meeting that demand with this new service,” added Gregorowitsch.

“This is one of Oman Air’s flagship routes and our second daily frequency is a clear indication of the strong demand for flights between these two great cities.”

Oman Air has operated flights into the UK for less than ten years. It first launched service on the Muscat – London city pair during the winter 2007/2008 schedules from November 2007, initially serving Gatwick Airport. However, like many long-haul airlines it made the switch to Heathrow Airport with its daily operation moving during January 2009.

It initially utilised Airbus A310 equipment but switched to newer A330-200s and then to larger A330-300s, which currently serve this market. These are likely to be replaced by brand new Boeing 787 Dreamliners on both rotations over the next two years.

Oman Air has ambitious plans to more than double its fleet before the end of the decade, growing to 70 aircraft by 2020. The airline is seeking to both grow point-to-point demand to support Oman’s business and tourism development strategies, but like Emirates Airline, Etihad Airways and Qatar Airways, use its geographical location to also provide transfer opportunities via Muscat International Airport.

Alongside Bangkok, London was one of Oman Air’s first intercontinental destinations and regards it as a flagship route for the company.  Demand has grown rapidly and MIDT data shows that passenger numbers on its flights have grown from around 70,000 in 2008 and 2009 to over 150,000 a year.  The airline claims the second rotation was a necessity to meet this demand as its current flight is “regularly sold out” across its three cabin offering.