UK leisure carrier Thomson Airways flew a Boeing 787-8 Dreamliner into Bristol Airport on April 19,2016 to help celebrate the return of long-haul operations from the South West of England from summer 2017.  The airline will use the modern generation airliner, its first ever scheduled deployment from Bristol, to introduce routes to Cancun in Mexico and Orlando Sanford in Florida, USA for Thomson and First Choice customers from summer 2017.

This marks the return of the two routes after a four year absence and will be the only direct long-haul services to be offered from Bristol Airport.  The move is part of the holiday company’s strategy to ensure customers across its home UK market can fly more easily from their local airports.

After Continental Airlines closed its daily link between Bristol and Newark in late 2010, Thomson had been the sole provider of long-haul services from the airport with its seasonal offer to both Cancun and Orlando Sanford.  The Orlando Sanford flights were introduced in 2007 by First Choice Airways ahead of its amalgamation with Thomson Airways and was joined by the Cancun programmethe following summer.  However, both destinations were dropped from Bristol in October 2013 at the end of the summer schedules.

“The routes added to the network will offer customers from the South West and Wales region more options of an exotic getaway. These destinations offer further choice for customers flying from their local regional airport to long haul destinations,” said Shaun Browne, aviation director, Bristol Airport.

News of the new long-haul routes comes as Thomson Airways also revealed it is to launch three new European routes from Bristol in 2017. Holidaymakers will be able to fly direct to Cantania, Italy, Chania in Greece, and the Catalonian city of Girona in Spain. On top of this, the introduction of additional flights to Gran Canaria, Pula in Croatia and Paphos in Cyprus will allow sun-seekers to choose 10 or 11-night breaks to provide greater flexibility and choice alongside the traditional seven or 14-night holiday.

“We are committed to taking customers on holiday from their local airport and we’re excited to be able to introduce these direct long haul routes from Bristol,” said Mark Hall, director of product for Thomson and First Choice. “We were the first UK airline to take delivery of the 787 Dreamliner, which has enabled us to open up new destinations for Thomson and First Choice customers and fly them there in style.” 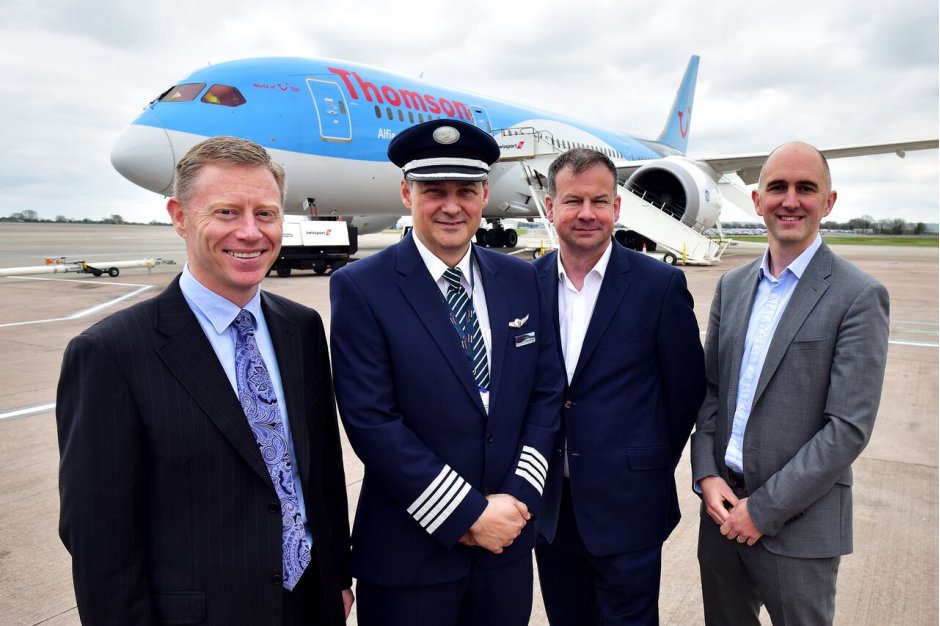 Alongside the growth from Bristol, Thomson Airways will also add to its long-haul activities at other UK airports with new flights from London Gatwick to St Lucia, from Manchester to Santa Clara, from Newcastle to Orlando Sanford and from Glasgow to Jamaica in summer 2017.

The airline says the Dreamliner has has “revolutionised air travel” and also highlight an interesting fact that the type has reduced flight times, on average, by 22 minutes since it was introduced in 2013 and in the process has helped Thomson Airways to offer a host of new and exciting holiday options.

The first 787-9 is expected to arrive in the next two months and our Airline Route blog shows that Thomson Airways has now added schedules for the larger variant of the Dreamliner to its inventory. The aircraft is planned to enter comercial service in the middle of July and will initially be used on three routes from London Gatwick.  It will debut on the London Gatwick – Cancun from July 15, 2016, a route that it will serve four times weekly and will also serve the London Gatwick – Orlando Sanford and London Gatwick – Punta Cana markets twice weekly and weekly, respectively, later the same week.