Questions were put to the panel via the sli.do website, allowing the audience members to submit their questions anonymously should they wish to do so.

The panel discussed the economic impacts of tourism in Africa, as well as the importance of island tourism for the likes of Tenerife.

The discussion kicked off with a debunking of the ideology of ‘tourism.’ Richard Bodin believes tourism is “a very broad word” as it can be broken down into various segments. This included commercial tourism, fly and flop (visiting a destination to go to the beach) and visiting friends and relatives. 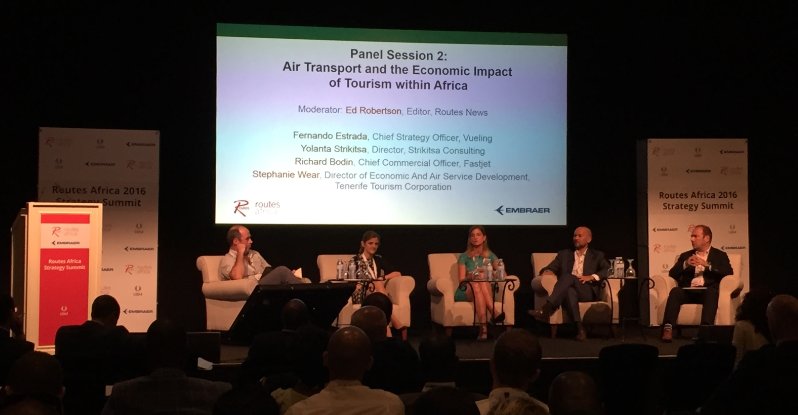 Speaking on the growth of Tenerife as a tourist destination, Stephanie Wear said although there has been considerable growth in recent years, this does not mean that Tenerife is happy with it. “We want to continue to put into place a strategy that helps us to open up new markets,” she explained.

The markets in question focus around the US and Africa. Given Tenerife’s close proximity to West Africa, they are an ideal location for those travelling from the US due to the short travel time onwards to the African continent. Wear shared with the audience that Tenerife Tourism Corporation has begun talks with tour operators in order to join forces to attract tourism from all points of the world.

One of the disadvantages faced by Africa when it comes to travel and tourism is the current perception of the continent. Richard Bodin believes that outside of Africa “people tend to lump all of the countries in one band” meaning potential customers view Africa as one entity rather than the regions it can be split in to.

“There is a lot of educating to be done there” he added. The issue of Africa being viewed as one whole continent as opposed to separate countries and regions was raised in the earlier panel of the day. In terms of security issues surrounding aviation, the point was made that if there is an aviation accident within Africa, the entire continent comes under the microscope as unsafe.

With Tenerife’s close proximity, much of the focus leading up to the event looked at West Africa. During the panel, East Africa as a destination was highlighted. Richard Bodin of fastjet says his airline “are very pro-East Africa” with a great deal to offer the region. He does feel that within East Africa there is still a great deal of protectionism which is hard to overcome.

In terms of an African carrier, Yolanta Strikista believes there is no significant competitor to Ethiopian Airlines at the moment. It was said that the airline is heavily promoting an increase in passenger traffic – at present, the airline has a domestic schedule of 20 cities, serving the likes of Addis Ababa, Mekele and Shilavo. Across Africa, 51 cities are served.