The International Air Transport Association (IATA) expects 7.2 billion passengers to travel in 2035, a near doubling of the 3.8 billion air travellers set for 2016. The prediction is based on a 3.7 percent annual Compound Average Growth Rate (CAGR) and highlights that the biggest driver of demand will be the Asia-Pacific region.

The latest update to the association’s 20-Year Air Passenger Forecast suggests that the developing Asia-Pacific region will be the source of more than half the new passengers over the next 20 years. China will displace the US as the world’s largest aviation market (defined by traffic to, from and within the country) around 2029, while rapid growth in India will see it displace the UK for third place in 2026, while Indonesia will enter the top ten at the expense of Italy, rising to the five largest aviation market.

Growth will also increasingly be driven within developing markets. Over the past decade the developing world’s share of total passenger traffic has risen from 24 percent to nearly 40 percent, and this trend is set to continue. “People want to fly. Demand for air travel over the next two decades is set to double. Enabling people and nations to trade, explore, and share the benefits of innovation and economic prosperity makes our world a better place,” said Alexandre de Juniac, director general and chief executive officer, IATA.

“Economic growth is the only durable solution for the world’s current economic woes. Yet we see governments raising barriers to trade rather than making it easier. If this continues in the long-term, it will mean slower growth and the world will be poorer for it. For aviation, the protectionist scenario could see growth slowing to as low as 2.5% annually. Not only will that mean fewer new aviation jobs, it will mean that instead of 7.2 billion travellers in 2035, we will have 5.8 billion. The economic impact of that will be broad and hard-felt,” said de Juniac.

Whatever scenario is eventually realised, growth will put pressure on infrastructure that is already struggling to cope with demand.  “Runways, terminals, security and baggage systems, air traffic control, and a whole raft of other elements need to be expanded to be ready for the growing number of flyers. It cannot be done by the industry alone. Planning for change requires governments, communities and the industry working together in partnership,” said de Juniac.

The industry will also need to be able to grow sustainably. Earlier this month airlines supported the establishment of a Carbon Offset and Reduction Scheme for International Aviation (CORSIA). This landmark agreement—the first among governments to manage the emissions growth of an entire global industrial sector—aims to cap net emissions with carbon neutral growth from 2020. 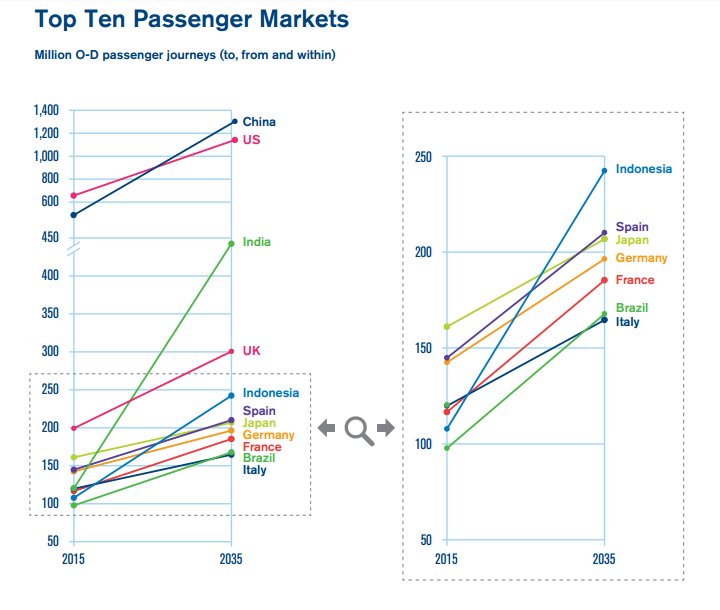 The top ten fastest-growing markets in percentage terms will all be in Africa: Sierra Leone, Guinea, Central African Republic, Benin, Mali, Rwanda, Togo, Uganda, Zambia and Madagascar as Africa is forecasted to grow by 5.1 percent per year. By 2035 it will see an extra 192 million passengers a year for a total market of 303 million passengers. Each of these developing African markets is expected to grow by more than 8 percent each year on average over the next 20 years, doubling in size each decade.

But it is expansive development across the Asia-Pacific region that is moving the axis of the industry eastwards. Routes to, from and within Asia-Pacific will see an extra 1.8 billion annual passengers by 2035, for an overall market size of 3.1 billion. Its annual average growth rate of 4.7 percent will be the second-highest, behind the Middle East.