This week, Boeing’s revolutionary 787 aircraft has been in commercial use for five years. The Dreamliner was designed in order to be around 20 percent more fuel efficient than the 767 model which it had been slated to replace.

Boeing had two options at hand to replace the ageing 767 model. Their first option for a new aircraft took the approach of creating a sub-sonic cruiser that would use around the same fuel economy as a 767, but would be able to dramatically reduce journey times. The other option was to create an up-sized version of the 747, to be named the 747X, intended to compete with the Airbus A380.

The sub-cruiser fit the market best, but once the events of September 11 2001 occurred, the market changed dramatically. Boeing came up with the concept of the 787 which is a much more fuel efficient aircraft. This was deemed a more important aspect to the industry with fuel prices rising following the 9/11 attacks, as opposed to a model which was able to reduce journey times.

Back in April 2004, ANA became the launch customer of the aircraft placing a firm order for 50 aircraft. By the following year, commitments for the aircraft had reached 237. By May 2007, the first Boeing 787 Dreamliner is beginning to be put together in Everett, Washington.

Boeing faced several hurdles along the way when building the aircraft. Problems with bolts, flight control software and supplier issues meant the flight target and delivery target had to be pushed back more than once. This lead to airlines withdrawing orders, but the first flight test took place in December 2009, and the aircraft attended the Farnborough Air Show in 2010. 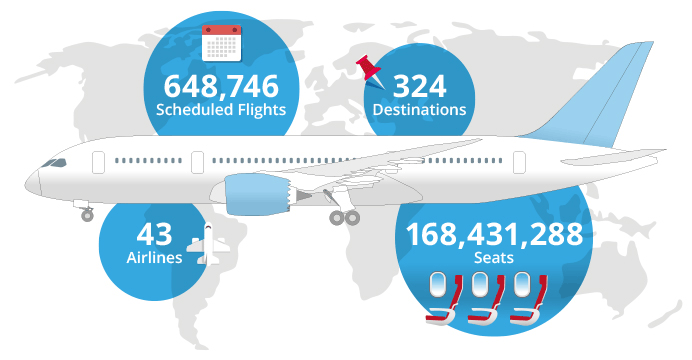 ANA’s first commercial flight on October 26 2011 utilising the aircraft was on the Tokyo-Narita to Hong Kong route. It was not until January 21 2012 that the Japanese carrier decided to deploy the aircraft onto international operations. The aircraft’s inaugural international flight was Tokyo-Haneda to the German hub of Frankfurt.

Five years in and interest in the aircraft model shows no sign of slowing, as the month of October has shown. At the beginning of the month it was announced that Pakistan International Airways were set to buy eight Dreamliner aircraft worth $1.8 billion. Should this order be finalised, it would double the fleet of the flag carrier.

Just a few days later, Spirit AeroSystems celebrated a huge milestone in 787 production. Spirit builds key components of the aircraft including the engine pylons. This month, they successfully delivered components for the 500th Dreamliner. Boeing vice president of 787, Mark Jenks said this aircraft will be used by Air France.

Two huge deals were placed within the last month for Dreamliners: from China Southern Airlines and from Qatar Airways. China Southern’s deal was struck for a dozen 787-9’s, valued at $3.2 billion, due for delivery between 2018 and 2020. This makes China Southern, one of the three biggest airlines in China, the country’s launch customer for this model. The carrier currently operate 10 787-8s in their fleet.

Just last week, AeroMexico unveiled its first Boeing 787-9 Dreamliner, dubbed ‘Quetzalcoatl.’ This aircraft is the first of 10 models ordered in a package in 2012, which was the largest investment in Mexican aviation. The first delivery of the 787-8 Dreamliner to the carrier took place three years ago, and it currently has nine in its fleet.

The Dreamliner has changed the course of aviation with many carriers worldwide benefitting from the fuel-efficient aircraft. One carrier in particular who consider the Boeing 787 to have played a substantial role in their massive expansion is Norwegian.

The Scandinavian carrier was confined to the Nordic market with a modest fleet of just 19 aircraft 10 years ago. Since then, the aircraft has expanded rapidly to more than 100 aircraft and a hefty order book with 200 more which are to follow in the next five years.

Norwegian made European aviation history in 2012 when it placed the largest single order for 222 aircraft, 122 of which are Boeing 737s. This was followed up in 2015 with an order for 19 787-9’s. This year, the third biggest European carrier have taken delivery of four of the new aircraft and expect a further nine in 2017. By the end of the decade it will take on 11 more.

London’s second biggest airport, Gatwick, has attributed much of their growth to Norwegian’s dedication to the Boeing 787. The airport has seen new routes to the US commencing since May 2014, including a five times weekly service to Los Angeles, a three times weekly to Oakland and a once weekly service to Fort Lauderdale. The airport has added the most new long-haul routes in Europe during the course of the year with an additional 20 in their network.

Speaking at Routes Europe this year in Krakow, senior analyst at the Ascend Flightglobal Consultancy put the aircraft under the microscope. When first marketed, the Boeing 787 was dubbed a ‘hub-buster’ which would revolutionise commercial aviation, allowing carriers to fly non-stop point-to-point services between non-hub airports. Although this has not quite been the case, the aircraft has allowed for airlines to grow their network significantly and to deploy the planes onto maturing markets.

Unsurprisingly, Ombelet discussed Norwegian and their use of the 787 to increase their network reach. Schedule data for 2016 shows that out of more than 600 routes, there are 368 long-haul routes that are operated on the 787 – 90 of these can be classified as new routes (not served by the airline for the previous five years.) This includes ten that were scheduled to start later this year.

Norwegian operated around a third of these new routes. This astonishing growth for the carrier could not have been possible were it not for the arrival of the Dreamliner.

Ombelet explained that it takes, on average, around 16 months between first delivery and new route. The longest range variant of the 787 can fly between 8,000 and 8,500 nautical miles: this covers a route equivalent to Los Angeles – Bangkok or New York City – Hong Kong.