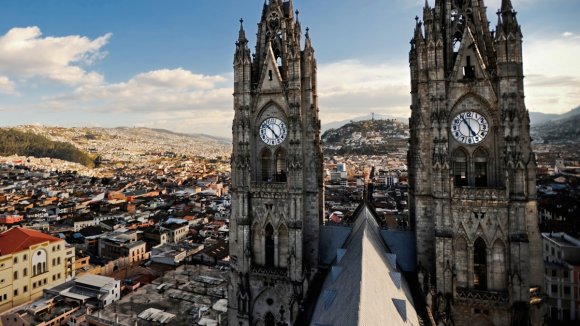 Routes Americas will be hosted by the Ecuadorian capital of Quito in 2018. A Routes event has never been held in Ecuador prior to this successful bid.

The South American city has become a ‘bucket list’ destination in recent years, as it is the perfect mix between old and new. The city, along with Routes Europe 2016 host city Krakow, is one of the first World Heritage sites declared by United Nationals Educational, Scientific and Cultural Organisation (UNESCO), who dubbed the city a “gem of human creative genius” due to the magnificent monumental architecture.

The city has also received great acclaim by being named The South America’s Leading Destination in the 2016 World Travel Awards: a title they have been the recipient of consecutively since 2013. The country rolled out a new advertising campaign last year to showcase what they have to offer. ‘All You Need Is Ecuador’ gave a glimpse into the beauty encapsulated by the eighth largest country in South America – but what better way to show the magic of Quito than hosting a Routes event?

Ecuador is one of just 17 countries that are classified as ‘mega-diverse’, as it is home to 14 nationalities and 18 indigenous groups. The melting pot that is Quito brings together a 16th century old town with a modern quarter that is home to shopping centres, the financial district as well as high-rise buildings alongside museums, art galleries and parks. Quito is home to the largest and most preserved historic centre in the Americas.

Quito’s airport, The New Marsical Sucre International Airport has only been in operation since 2013. It was built in order to not only deal with increased passenger numbers and provide safer infrastructure for visitors. It is one of the most modern airports on the continent. The 4,100 metre runway is the longest in the country and one of the longest in Latin America. Earlier this year, JetBlue began service to Quito with a daily flight from Fort Lauderdale on Airbus A320 aircraft.

Something Quito can offer a visitor that nowhere else in the world can, is the ability to stand in both the Northern and Southern hemisphere at the same time. But there is a catch – there are technically two different monuments which are believed to be the ‘centre of the earth’.

The historical equator line, as defined through a 1736 expedition the French Geodesic Mission, is commemorated through a ten metre high monument which resonates with tourists for being popular for photos. At Mitad del Mundo you will see a yellow line that divides the two hemispheres – so you can dip between the two, should you choose to. Just 240 metres north, you will find what is calculated as the actual equator line: latitude 0°0‘0’’. This is a yellow line on the ground of the Inti-Ñan Solar Museum.

Quito is home to the largest and most preserved historic centre in the Americas, as you will see if you take a look around the Old Town, known as the Centro Historico or Colonial Quito. It is jam-packed with an array of beautiful churches and the Cathedral takes pride of place in the Plaza de la Independencia along with the City Hall and the Government Palace. It is steeped in history, with museums and old houses which have been preserved.

Probably the most famous attraction within Quito is TelefériQo. It offers visitors the opportunity to take in the most spectacular views of the city in the most accessible way. It only takes 10 minutes to soar up the side of Quito’s western mountain range along the Pichincha Volcanoes. Those who enjoy hiking will enjoy the trail toward Rucu Pichincha and although you reach an altitude of 13,300 ft it isn’t a challenging hike.

Last, but by no means least, Quito’s Museo del Banco Central is a landmark building full of different rooms which are devoted to pre-Columbian, Colonial and gold works of art. Showcased is the country’s largest collection of Ecuadorian art. Famous pieces include elaborate gold headdresses and re-created miniature scenes of life along the Amazon.