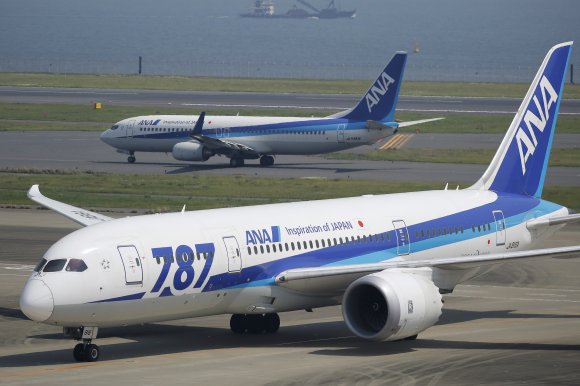 In 2020, as the Olympic flame burns brightly in Tokyo’s National Olympic Stadium, All Nippon Airways (ANA) is hoping to celebrate its own gold-medal performance. At the end of that financial year ending March 31, 2020, the carrier’s parent ANA Holdings has targeted 40% increases in its international passenger and cargo revenues compared with 2015; a tripling of revenues from its low-cost carrier (LCC) subsidiary, Vanilla Air; the smooth introduction of three Airbus A380s; and a sizeable $1.72 billion profit.

As with any medal-winning achievement, hard work is the bedrock for success. That means a busy few years ahead for an airline that has grown to be Japan’s largest. Both tailwinds and headwinds will buffet the airline in its efforts. There’s the 2020 Olympic Games in Tokyo to look forward to, of course; continuing growth in many neighbouring Asian countries; a relaxation in local visa requirements and improvements in Japanese infrastructure, both on the ground and in the air. Conversely, high operating costs continue to dampen demand, a situation made worse by a faltering economy and the appreciation of the yen. The slowdown in Chinese growth could also prove influential.

The focus on international passenger revenues will make full use of additional slots at Haneda Airport in downtown Tokyo. In total, an additional 39,000 international flight movements will be possible by 2020. Naturally enough, ANA won’t be neglecting Narita International Airport in the nearby Chiba prefecture either. This dual-hub strategy will be complemented by the “Tokyo triple bank” model that creates three waves of flights for easy connectivity. The focus at Haneda will be on morning and late night, with early evening the cornerstone of the Narita operation.

Toyoyuki Nagamine, executive vice-president and member of the board at ANA Holdings Inc, says the optimal use of slots at Haneda and Narita airports will help the airline capture travel demand from the local Japanese market, inbound foreign travellers and those passengers transiting in Japan as they journey from the US to Asia.

“ANA also continues to strengthen its existing routes and expand new services to ‘white spots’ in Asia and Central and South America,” he says. “It will further expand its network by engaging in more integrated joint ventures or seeking new partnership with other carriers.”

ANA Holdings recently announced a codeshare agreement with Vietnam Airlines, for example, a carrier in which it already has an 8.8% stake. The agreement will initially cover 10 international routes, linking Japan and Vietnam, and 25 domestic routes. There is also a reciprocal arrangement on the carriers’ frequent-flyer programmes.

“The cooperation with ANA Holdings, which owns a leading global airline with excellent service quality, has important meaning in the development of Vietnam Airlines as it helps us to diversify our products and improve our competitiveness on the international market,” says Duong Tri Thanh, president and CEO of Vietnam Airlines.

“Through strategic long-term development, cooperation and experiences from ANA, Vietnam Airlines’ goal of becoming a five-star airline will certainly be more reachable.” By the end of 2020 financial year, the international available seat kilometres on offer from ANA Holdings will grow by half, reaching 151% of the 2015 total.

In terms of domestic service, Nagamine suggests the key to profitability is rightsizing the aircraft. In a nutshell, that means widebody aircraft in times of high demand and narrowbody aircraft in times of low demand. “ANA also intends to capture growing demand from inbound tourists to connect to domestic flights, especially from the Asian region where economic growth continues,” he adds. An enhanced travel experience will also play its part on the domestic network, including in-flight Wi-Fi, free access to the latest news on real-time live TV and the introduction of new seat products.

Perhaps the most critical element in the domestic equation, however, is the introduction of the new Mitsubishi Regional Jet (MRJ). It is due to enter service in mid-2018, with ANA the launch customer, a position the airline also held with the Boeing 787. But, not unlike the 787 situation, the MRJ project has been dogged by delays. The manufacturer warned the airline in October 2016 of a possible further delay for “technical reasons”, although this has yet to be confirmed.

Even so, it is likely that ANA will continue to perform strongly within the national boundary. In FY2015, ANA carried some 1.3 million inbound travellers on its domestic flights, a 29% increase on the previous year. Meanwhile, the aim for the ANA Holdings cargo business is to develop a logistic service that covers all Asia.

The main cargo hub is at Okinawa, the southerly location being far closer to many of the most important Asian cargo destinations – such as Shanghai and Hong Kong – than Tokyo. This provides easier access to important and growing economies, especially in the south-east of the region, and will give ANA a fighting chance of achieving its goal of profitability in the air freighter business by 2017 and a global top-five spot in terms of freight handled by 2020. Currently, ANA Holdings’ cargo operation moves about 1.3 million tons of goods per year.

If anything, ANA Holdings’ LCC subsidiary, Vanilla Air, has a bigger role to play in boosting the bottom line. In Japan, LCC penetration is still low compared with other mature markets, hovering around 10% according to most reports. “Vanilla Air as a Japanese LCC is creating new travel demand in the market,” says Nagamine. “It has room for growth and ANA Holdings aims to grow Vanilla Air into the number one LCC brand in the Tokyo Metropolitan area as one of its core businesses.”

The leisure market for flights out of Japan to new resort destinations will be crucial to Vanilla Air’s success as will capturing further demand for inbound travel with new routes serving mainland China. Some reports suggest that the Airbus A321neo might be on the Vanilla Air wish list, which would be a significant step as it would bring such major south-east Asian cities as Jakarta, Kuala Lumpur and Singapore within reach of a Tokyo narrowbody operation. The Boeing 737 Max will also offer this capability and these new aircraft could radically alter the Asia-Pacific LCC landscape.

At the other end of the aircraft scale, ANA Holdings has announced that ANA will operate three Airbus A380s on the Honolulu route from Tokyo. “Under the current mid-term plan for 2016 through 2020, one of our growth strategies for international routes is an expansion in servicing resort destinations,” says Nagamine. “They are expected to continue to have stable travel demand, but due to a limitation in departure/landing slots at Tokyo metropolitan airports, we took this purchase decision after concluding that these aircraft could efficiently transport these passengers.

“Currently, ANA operates a total of three flights daily to Honolulu from Narita and Haneda, and when the A380 is introduced, ANA’s share of total available seats will increase from 10% to approximately 24%,” he continues. “ANA intends to leverage the large size of these aircraft to achieve an increase in passenger share that exceeds the growth in the frequency share.”

Nagamine insists, though, that the networks of the full-service carrier and the LCC will not be defined by geography but by fulfilling demand. The target audience for each business model is a vital differentiator and so both airlines “will continue to serve Asia”.

Other ANA Holding companies will drive revenues too. There are 63 consolidated subsidiaries as well as 17 equity investments. Airline-related business also includes catering and IT services. A notable addition to the portfolio is MRO Japan, which has been going for a little more than a year.

The maintenance business is based in Osaka but is looking to move to Okinawa in the near future to take advantage of Okinawa’s incentive programme for new businesses and the city’s ever-improving air connectivity. The aim is to attract both local and overseas carriers.

“We will offer high-quality and costcompetitive maintenance, repair and overhaul services by taking advantage of the location to contribute to the development of the aviation industry and the community,” says Seiro Arakawa, MRO Japan’s president.

If everything goes to plan, the group’s target profit of $1.72 billion looks eminently achievable. It helps that ANA is a Skytrax 5-Star airline, an award it has won every year since 2012. Indeed, perfecting services at every stage of the journey, from reservation to in-flight and arrival, is something that occupies a lot of the airline management’s time. “Many elements are interrelated,” says Nagamine. “Not only services but also products like the 787 and airport lounges are important. Our entire group divisions are doing their best to offer passengers safe and comfortable flight experiences.”

The codeshare with Vietnam Airlines illustrates his point. In addition to the operational and frequent-flyer initiatives, Vietnam Airlines cabin crew will join ANA flights to guide and interpret for customers and make in-flight announcements in Vietnamese. Airport support activities, such as check-in, lounge and baggage services will be integrated at selected airports too, including Haneda Airport in Japan and Tan Son Nhat Airport in Vietnam.

There is little doubt that ANA and its parent company are taking on enormous tasks in their corporate strategy. But given the humble beginnings of the airline – it started operating with just two helicopters – and the fact that is has been flying internationally for only 30 years, it has clearly come a long way already.

The airline’s president and CEO, Shinya Katanozaka, describes the next five years as a “tremendous business opportunity” and believes that “taking on new challenges and creating growth” is part of the airline’s DNA. It will need to be. Katanozaka wants ANA to provide customers with the highest level of hospitality; improve its presence in the global market; resolve environmental issues; contribute to Japan’s society through regional revitalisation; and promote Japan as a destination for tourism – all that in addition to the concrete financial and operating goals.

If ANA wins gold, it will definitely deserve it.