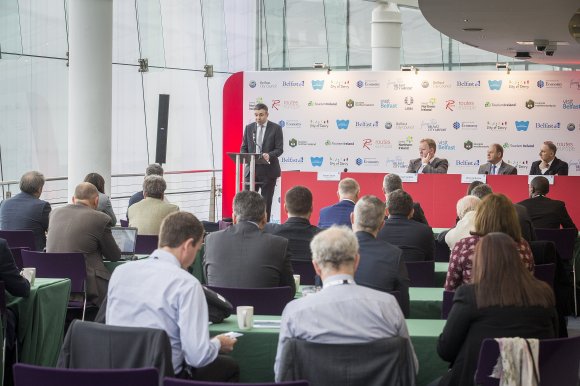 The press conference took place at the Routes Europe 2017 aviation forum which Belfast is hosting for 1,200 aviation professionals who are meeting to plan future European air services.

Increased air access has been key to this growth, with Belfast International Airport and George Best Belfast City Airport handling 7.8 million passengers last year. The numbers are expected to continue to rise during 2017.

George Best Belfast City Airport’s chief executive, Brian Ambrose said: “We at Belfast City have been responding to this growth and have been developing a European network to complement our existing comprehensive domestic UK network.

“We are confident that this aspect of our business will more than double in size over the next five years. Last year for example, we reached our previous year’s total for international passengers in August and we are set for another bumper year this year.”

The managing director of Belfast International Airport, Graham Keddie, gave some background to this success: “We are growing our inbound tourism market. We’re building new hotels. Offering greater choice. Supporting lucrative international conferencing and tour business. And offering quality, and value for money, at every turn.

“We are reinventing ourselves as a city of the 21st century when technological innovation, entrepreneurship, tourism and hospitality will define who we are and what we do.

“Access is crucially important. Getting here was once a challenge, but not anymore.”

As Steven Small, brand director of Routes explained: “Route development is essential for airports and destinations. The economic impact of new air services is immense - they create jobs, connect businesses and help to boost tourism.

“Hosting Routes Europe is an unprecedented opportunity for Team Northern Ireland to show the aviation industry what it has to offer, and the potential for launching new air services.”

Routes Europe 2017 is taking place at the Belfast Waterfront until tomorrow (25 April).